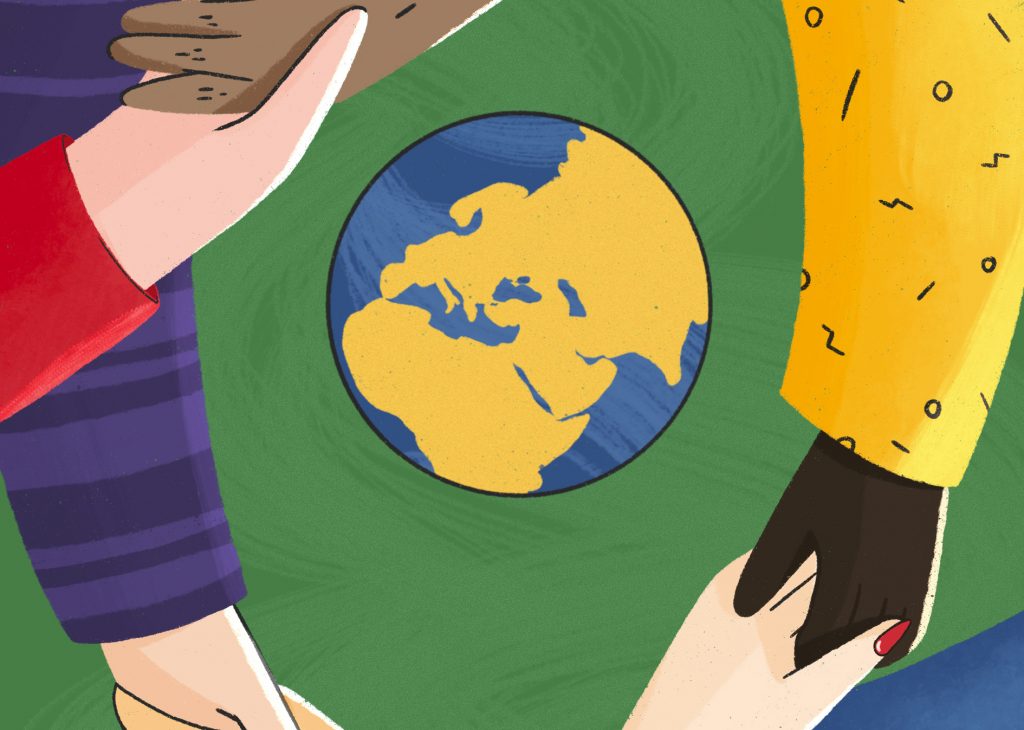 Meadhbh Bolger works on resource justice and the circular economy in the Friends of the Earth Europe office in Brussels. We talked to her about what solidarity looks like when it comes to access to natural resources.

Solidarity is a founding value of the European Union. Do you see it being enacted by the institutions when it comes to resources and raw materials?

The main form that solidarity takes within the EU is between the middle- and upper-classes of its member states.

In this respect, its raw materials policies are deeply rooted in this kind of solidarity – EU material consumption is double sustainable and just levels, and the European Commission has no desire to introduce targets to reduce it. This means that if you own, or are a comfortable white-collar employee, of a mining company, you’re in luck.

This solidarity, however, runs out if you’re one of the many, many more people who live near a mineral-rich area in Europe or in the Global South.

What are the biggest impacts of this lack of solidarity by the EU? Who is most affected?

The EU’s failure to deal with the problem of its (growing) over-consumption of natural resources hurts largely rural communities within Europe and elsewhere in the world. These communities usually have no genuine right to say no to the mining projects which our growth-based economic system demands. Livelihoods and entire ways of life are uprooted and destroyed.

What we need instead is a genuine solidarity economy that operates in the interest of workers, and the environment, and respects planetary boundaries.

What would you like to see the EU doing more or differently in your area of work to live up to its stated value of solidarity?

The EU needs to introduce binding targets to reduce its consumption of natural resources by 2030 and longer-term. Imagine writing a climate law without an emissions reduction target – that’s what they’re doing now. It won’t work because it’s not designed to. This would lead to less mining overall, and truly be in solidarity with communities around the world suffering its impacts. Also a genuine legal right to say no to a new mine needs to be enacted.

A genuine legal right to say no to a new mine needs to be enacted.

What examples of solidarity do you see from communities and the movement to resist mining?

In Greencastle, Northern Ireland, the local community who have been fighting off a gold mine for years set up “Greencastle People’s Office”. This is a clutch of caravans near the proposed mine which serves as a command centre to organise and protect the beauty spots being scoped out by mining companies. A community spokesperson said they will resist the mine: “through education in our local communities, schools, colleges and churches we will build a powerful and effective collaboration of social networks here and abroad of community organisations and institutions to resist mining in this area.”

At the European level, in June 2020 Friends of the Earth Europe helped set up, and are a core member of, the Yes to Life No to Mining European (YLNM) network.

YLNM is an international solidarity network of groups resisting mining. We hold monthly calls with communities and civil society organisations from around Europe to share updates on what is happening at local, national and EU levels regarding actions by mining companies, policy-wise, and to organise joint actions such as this recent statement.

The idea of a ‘solidarity economy’ is pushed by some campaign groups – What is it and does FoEE support it?

We currently live under a solidarity economy of sorts – there is strong class solidarity between middle- and upper-class policymakers and the capitalist class they represent. Together, they entrench a growth-based model of the economy where workers are kept in misery, finite resources are depleted, and an ever-smaller proportion of people hoard ever-more wealth.

What we need instead is a genuine solidarity economy that operates in the interest of workers, and the environment, and respects planetary boundaries. We need policymakers who are unafraid to take radical action to cut our use of natural resources, and redistribute power and wealth to the people.