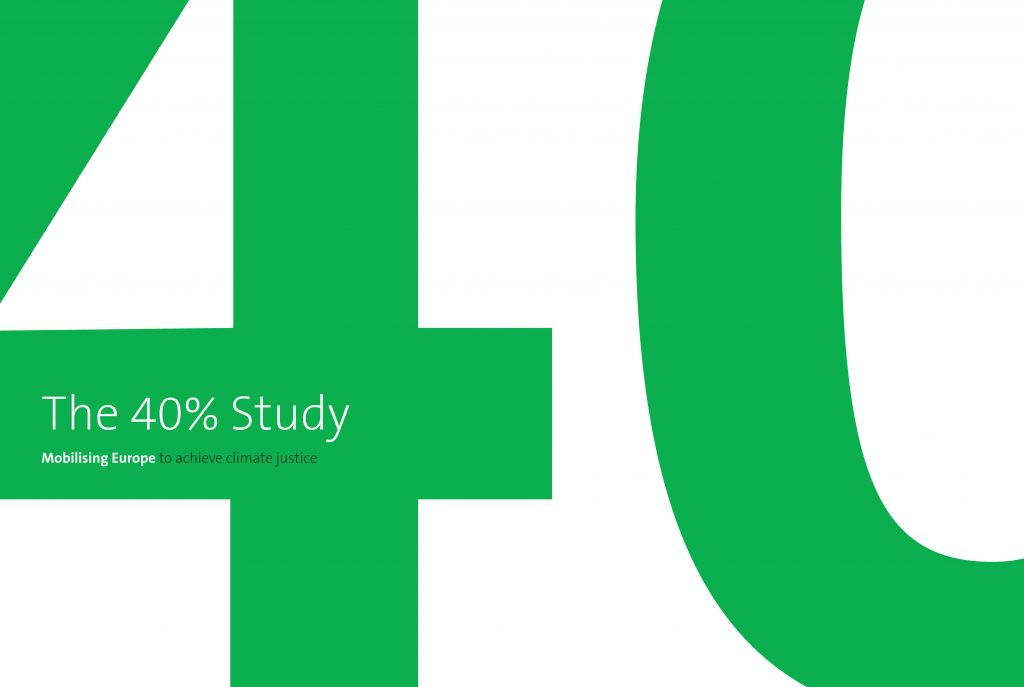 Brussels – One week ahead of crucial climate change talks in Copenhagen, a new study released today by Stockholm Environment Institute in partnership with Friends of the Earth Europe proves for the first time that Europe could double its greenhouse gas emission reduction target for 2020.

The research, ‘Europe’s Share of the Climate Challenge: Domestic Actions and International Obligations to Protect the Planet’ [1] shows how Europe can cut domestic emissions by 40% in 2020, and by 90% in 2050, compared to 1990 levels. This is the minimum scale and speed of reductions science says is likely to be needed from rich countries to avert a climate catastrophe and would enable the European Union to live up to its historical responsibility for causing climate change.

Magda Stoczkiewicz, director of Friends of the Earth Europe said: “This study proves that it is possible for Europe to deliver its fair share of necessary global emission cuts. A 40% cut by 2020 in Europe is feasible and affordable, and it can be done without resorting to dangerous or unproven solutions. Current political proposals are not ambitious enough – we need a bold shift in policy and determination from European politicians now. The EU can make these cuts in a way which not only improves the quality of life for people in Europe, but also ensures the rights of poorer parts of the world to develop sustainably.”

Using detailed modeling the study describes a comprehensive pathway for Europe to achieve 40% emissions cuts through a combination of radical improvements in energy efficiency, the accelerated phase-out of fossil fuels, a dramatic shift towards renewable energies, and lifestyle changes.

Lifestyle changes envisaged by the study include a shift to public transport with only 43% of trips being made by car in 2050 compared to 75% in 2005. Such changes could make the carbon footprint of the average European 8 times smaller in 2050 than today.

The report estimates the costs of the scenario, and outlines the EU’s fair share of the finances needed for developing countries to fight climate change. It calculates that between 2010 and 2020 mitigation costs in Europe would likely be about 2% of the EU’s discounted cumulative GDP of €111trillion, or 2€ per person per day, which is a value consistent with other mitigation studies.

The study also shows that aggressive actions to cut emissions at home will not be enough to keep the planet safe from dangerous climate change and that the EU and others with the capacity and responsibility, must support the developing world’s climate challenge. The EU’s fair share of finances for the developing world for both mitigating and adapting to climate change amounts to between €150 billion and €450 billion per year by 2020 – another 1% to 3% of the EU’s GDP, or less then 3€ per day per person according to the study.

Aggressive actions to cut emissions at home coupled with adequate finances for developing countries are the two-fold obligation which Europe must fulfill to fight climate change in a fair and just way.

The study shows that with these actions greater equity can also be achieved within Europe since changes in patterns of economic growth in different nations will close the gap between the richest and poorest countries.

Dr Charles Heaps of Stockholm Environment Institute, lead author of the report and a senior scientist in SEI’s climate and energy program, said: “Our analysis shows that deep cuts in emissions can be achieved in Europe at reasonable cost between now and 2050, even with rather conservative assumptions about technological improvement. The scale and speed of changes required may seem daunting, and indeed it will require a mobilisation of Europe’s economies, but the potential costs of inaction are so large that doing nothing presents a far more implausible and dangerous future pathway for Europe.”

[1] A summary of the study by Friends of the Earth Europe entitled ‘The 40% Study – Mobilising Europe to achieve climate justice is available here.

A media briefing for journalists is available here.

The full report ‘Europe’s Share of the Climate Challenge: Domestic Actions and International Obligations to Protect the Planet’ is available at: www.sei-international.org/climateshareeurope

The Stockholm Environment Institute is an independent, international research institute working on environment and development issues. The institute’s goal is to bridge science and policy on sustainability.
www.sei-international.org

Friends of the Earth’s climate campaign, the Big Ask, is calling on governments across Europe to commit to legally binding year on year cuts in emissions equal to a 40% reduction of EU-wide domestic emissions by 2020. www.thebigask.eu