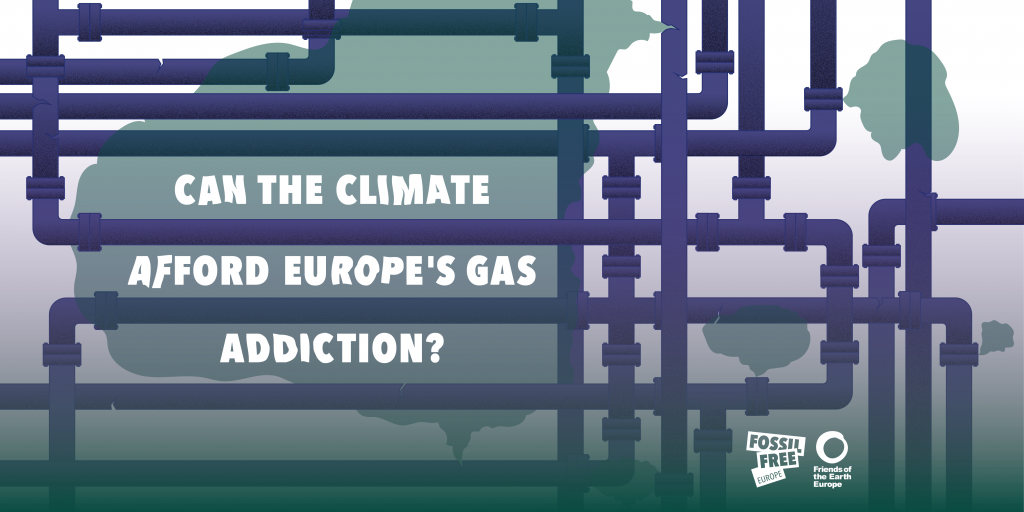 A new study, commissioned by Friends of the Earth Europe from the Tyndall Centre for Climate Change Research and the Teesside University, shows that EU countries can afford just nine more years of burning gas and other fossil fuels at the current rate before they will have exhausted their share of the earth’s remaining carbon budget for maximum temperature rises of 2°C.

Even with a managed phase-out, fossil fuels including natural gas, can have no substantial role beyond 2035 in an EU energy system compatible with 2°C.

The findings are a stark reminder of the urgency with which Europe, as a region historically responsible for climate change, needs to shift to an energy system free from fossil fuels. Under the terms of the Paris climate agreement, the EU has committed to limit global warming to ‘well below 2°C’ and to ‘pursue efforts to limit the temperature increase to 1.5°C’. For 1.5°C, gas and other fossil fuels would need to be phased-out even faster.

Because of the high levels of both CO2 and methane emissions throughout the gas lifecycle, the authors conclude that, “there is categorically no role for bringing additional fossil fuel reserves, including gas, into production”, and that, ”an urgent programme to phase out existing natural gas and other fossil fuel use across the EU is an imperative”.

This warning comes as the EU is poised to publish a list of at least 90 new major gas projects it is considering for public funding. In the last three years, the EU has granted more than €1 billion in public finance to gas projects.

Jagoda Munic, director of Friends of the Earth Europe, said: “Europe’s infatuation with gas is totally incompatible with serious action on climate change. The oil and gas industry is going all out to paint gas as green and keep us hooked on fossil fuels, but the truth is there is absolutely no room for gas in the transition we need to a clean energy future. Europe needs to urgently get off all fossil fuels, realise the full potential of energy savings, and go for a 100% renewable system in the hands of people.”

Professor Kevin Anderson, Tyndall Centre for Climate Change Research and the Teesside University said: “If the EU is to transform its energy system to align with the Paris temperature and equity commitments, it cannot continue with business as usual and must instead initiate a rapid phase out of all fossil fuels including natural gas. This needs to begin now and be complete within the coming two decades.”

Doctor John Broderick, Tyndall Centre for Climate Change Research and University of Manchester said: “Extracting and burning natural gas produces substantial quantities of methane and carbon dioxide which warm the climate in different ways. We need to rapidly reduce emissions of both of these gases to prevent dangerous climate change, not one or the other.”

For the next two weeks, negotiators from around the world are meeting in Bonn, Germany for the United Nations climate talks. Talks will focus on agreeing the ‘rule book’ for implementation of the Paris Agreement. *

Can Europe afford its addiction to #gas? Not if it’s serious about #climatechange.
New study: https://t.co/JWA1wBXZrX#NoRoomForGas #COP23 pic.twitter.com/BVgknoaher