How big business gets control over our food 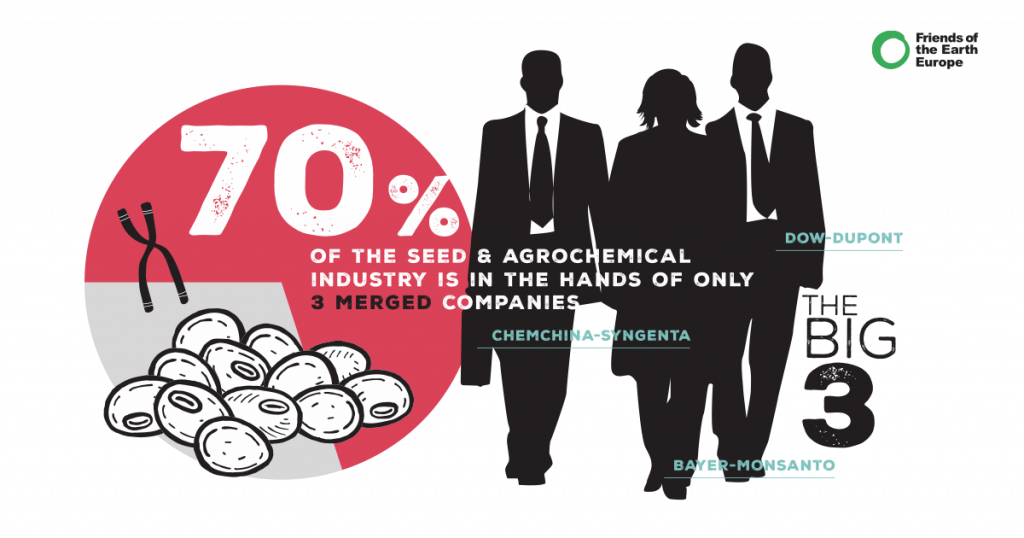 While Europe’s environment ministers will discuss for the first time the deregulation of a new generation of genetically modified organisms (GMOs) when they meet today, Friends of the Earth Europe presents a new investigation on what truly lies beneath big agribusiness corporations’ push for EU deregulation of new GMOs.

The briefing debunks the notion that the new generation of GMOs is just an easy and cheap solution to speed up progress in plant breeding techniques. In reality, new GMOs are driven by big agribusiness firms to increase their control over the food and farming sector. Some key take-aways:

The lobby power of big agribusiness and biotech

Big agribusiness and biotech corporations are currently pushing for the European Commission to remove any labelling and safety checks for new genomic techniques (NGT). In addition to keeping farmers and consumers in the dark as to what they are growing and eating, it would also help them minimise their costs. Since the beginning of their lobbying efforts, in 2018, top agribusiness and biotech corporations [1]:

As a result, the European Commission seems more than willing to put the lobbies’ demands into a new law that would include weakened safety checks and bypass GMO labelling. This is a stark example of how much influence big agribusiness and biotech have on our decision-making processes.

Mute Schimpf, food and farming campaigner at Friends of the Earth Europe said:

“The story that GMO lobbyists are spinning is a story of false promises. New GMOs will not fix the climate crisis and they will not feed the world, but the good news is we know what will: small-scale farming and agroecology. Giving in to big biotech’s lobbying tactics will only help them secure an unprecedented control over our farms and food.”

The same big corporations producing GMOs and toxic pesticides are also the ones pushing for patents on new GMOs to include all conventionally bred plants with similar genetic characteristics, in a move to gain unprecedented control over both plants and seeds.

Far from the “democratizing tool” agribusiness lobbies are trying to sell us and the EU, these new gene editing technologies and the plants produced using them are actually patented. Since the patenting licenses for CRISPR, which makes up 68.5% of genetically engineered plants, were first made available, one major corporation has been buying up the rights to gate-keep this technology: Corteva.

Up until now in the EU, plant varieties have had their own intellectual property right systems with breeders holding rights to access the different varieties, and farmers holding rights to save their own seeds. If patents on seeds are introduced in the EU, the power over these seeds would shift to the handful of mega-corporations controlling them.