Financiers of palm oil must stop deforestation and illegal activity 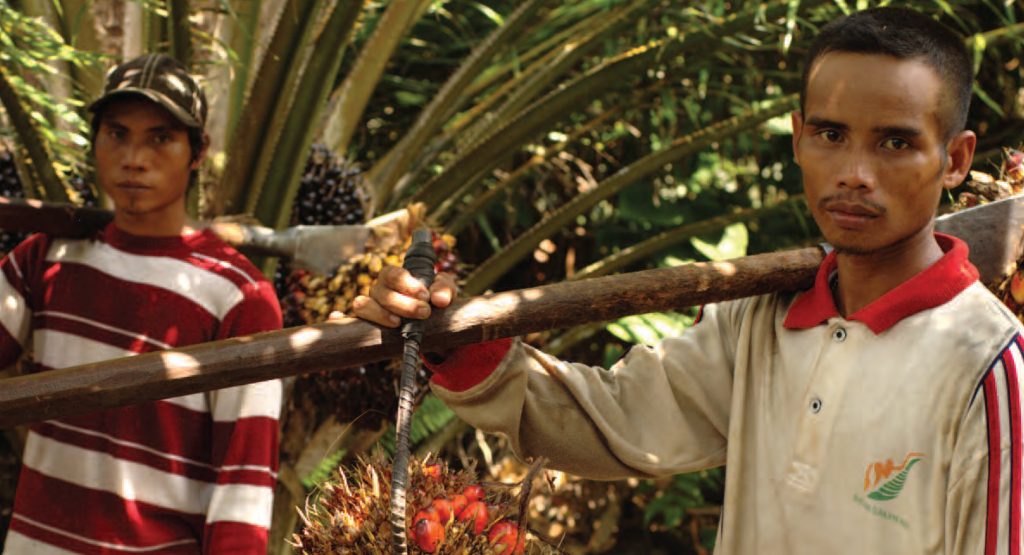 Illegal and harmful production of palmoil in Indonesia is continuing, reveals a new report released today by Friends of the Earth.

The study concludes that voluntary guidelines, such as those established by the Round Table on Sustainable Palm Oil (RSPO) and the Environmental, Social and Governance policies (ESG) of European investors have not led to any significant improvement in the situation.

‘Commodity Crimes: Illicit Land Grabs, Illegal Palm Oil and Endangered Orangutans‘ documents the illegal logging of land near protected forests in Indonesia by Bumitama Agri Group, leading to the destruction of forest that is home to endangered orangutans.

A plantation, managed by Bumitama, was cleared in violation of national laws, creating at least 5,000 hectares of ‘ghost estates’ which operate without the necessary permits. Selling palm oil from unlicensed plantations is illegal, yet large palm oil companies, for example the palm oil giant Wilmar International, purchase more than half (56%) of Bumitama Agri’s palm oil, thereby bringing illegal palm oil into their supply chain.

Palm oil company IOI holds 31% of the shares of Bumitama and IOI’s chief executive officer, Lee Yeow Chor, currently holds a position on the Board of Directors of Bumitama Agri.

Anne van Schaik, sustainable finance campaigner at Friends of the Earth Europe, said: “This is not the first time Friends of the Earth has alerted financiers about problems with palm oil companies. We see this now as the last chance for financiers to address the serious problems of the palm oil companies they are investing in and that are consequently violating the financiers’ own ethical standards. If these problems are not addressed immediately, the financiers should cancel their loans or withhold further financial services for Bumitama, IOI and Wilmar, and take steps towards public divestment from these companies. After all, it is also their credibility which is at stake.” [2]

UPDATE: On December 5, Wilmar International bowed to public pressure and published a ‘No Deforestation, No Peat, No Exploitation Policy’ that it says, “aims to advance an environmentally and socially responsible palm oil industry”.

In response to this move, Friends of the Earth International published a statement calling on the company to fulfil its commitments:

“Wilmar’s commitment to improvement comes in the wake of many years of land-grabbing, fueling of conflicts, destruction of endangered habitat, and other abuses – all of which has rewarded Wilmar and its associates with enormous profits, and established the company as the world’s largest palm oil trader.

In light of this, Wilmar needs to take immediate steps to demonstrate that it takes this new policy seriously. These steps include bringing an immediate end to conversion of natural forest to plantations; halting its purchasing of palm oil from Bumitama Agri Ltd.; immediate adherence to national laws in Uganda and all the countries where it operates; and the full and demonstrable application of Free Prior and Informed Consent (FPIC) in all of its operations, including consideration for returning lands which were previously acquired without communities’ consent and through processes which did not respect their ownership rights. Without these concrete and immediate actions, the statement of Wilmar will be merely greenwash to prevent pressure from civil society groups.

Friends of the Earth will be closely monitoring the implementation of Wilmar’s stated commitments.”

You can read the full statement on the Friends of the Earth International website.

[2] A full description of the ESG policies of the European financiers, the kind and amount of money they have invested in IOI, Wilmar and IOI as well as their response can be found in the report.