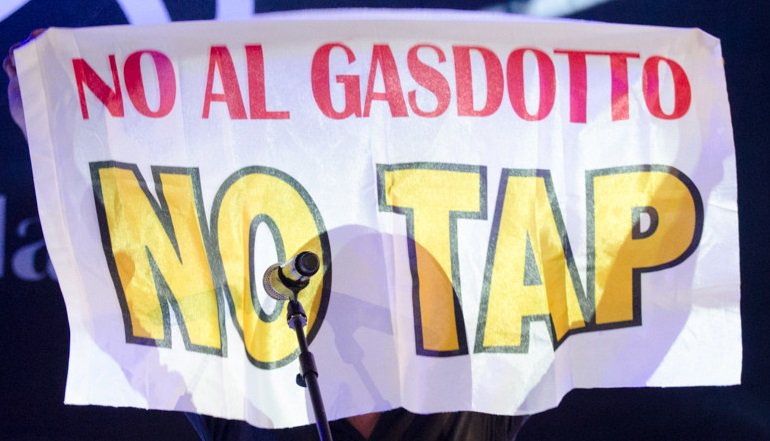 The European Investment Bank (EIB) voted today to hand out one of Europe’s largest ever loans to one of the EU’s largest fossil fuel projects, the contentious Trans Adriatic Pipeline (TAP).

The loan approval follows the release of a study last week demonstrating that the Southern Gas Corridor – of which TAP is a part – could be as emissions-intensive or even more so than coal power.

Over the past few years Bankwatch, Counter Balance, Friends of the Earth Europe, 350.org and a growing number of civil society groups across the world have warned that TAP and the entire Southern Gas Corridor project would be detrimental to the EU’s efforts to cut greenhouse gas emissions.

In spite of these calls, none of the institutions promoting or financing the Southern Gas Corridor have actively publicised a climate impact assessment of this massive fossil gas project so far.

But a document obtained via a freedom of information request revealed that the European Commissioner for Energy and Climate Action and the Vice President of the European Commission in charge of the Energy Union have been lobbying the EIB to green-light loans to TAP and the eastern section of the Southern Gas Corridor, the Trans Anatolian Pipeline (TANAP).

The EIB decision on the TAP project has already been delayed multiple times over the past years. Just days before its December meeting, the EIB’s board of directors, representing all 28 EU Members States, received over 4 000 emails from concerned citizens urging them not to fund TAP, resulting in another postponement of a decision on the project.

The December meeting, which coincided with the anniversary of the Paris Climate agreement and the One Planet climate finance summit, had been slated for a decision on the loan.

“Having avoided the embarrassment of announcing a fossil fuel mega-loan on the anniversary of the Paris climate agreement, the European Investment Bank is now shamelessly locking Europe into decades of fossil fuel dependency even as the window for fossil fuel use is slamming shut. The Banks’s biggest ever investment in dangerous fossil fuels undermines the EU’s commitment to climate action when we urgently need to be transitioning to a fossil free future.”

Many people are taking part in “6 days to stop € tap” event to ask @eib to not finance TAP. Join us in order to prevent the realization of a useless and bad infrastructure #notap
Take part! https://t.co/cB3QcINpLG pic.twitter.com/Mj4Vo35dt1

“We witnessed today a historical mistake by the EIB, a self-styled green finance champion which has shown its true colours. The bank is showing its poor consideration of climate challenges, as well as its disregard for the problematic human rights situation in Turkey and Azerbaijan.”

“This is symptomatic that the Southern Gas Corridor has been approved without EU institutions disclosing its climate impact.”

“There is no time to lose. While European politicians and financiers continue to put their support behind the fossil fuel industry, the local communities that will directly feel the negative impacts on their lives are determined to stop projects like these gas mega-pipelines from ever being built. More and more people across Europe are stepping up in support to ensure not a penny more is invested in climate-wrecking fossil fuels.”

Traversing Greece, Albania and the Adriatic Sea before making a landfall on Italy’s southern shores, TAP is envisaged as the western section of the Southern Gas Corridor. A 3500 kilometre long chain of pipelines starting in Azerbaijan’s Shah Deniz II offshore gas field, this project is designed to pump annually ten billion cubic metres of fossil gas to Europe starting 2020, in addition to six billion cubic metres of gas that could arrive to Turkey as early as this year.

A recent study for Friends of the Earth Europe by the Tyndall Centre for Climate Change Research found that EU countries can afford just nine more years of burning gas and other fossil fuels at the current rate before they will have exhausted their share of the earth’s remaining carbon budget for maximum temperature rises of 2°C.

The dash for #gas continues at the @EIB, with no sign of funding for the fossil fuel slowing. Get the numbers in the latest briefing by @ceebankwatch [https://t.co/oKVQ3mt8jV] #NoTAP pic.twitter.com/zt1Briikby