Why the LNG terminal on Krk is unacceptable and unprofitable 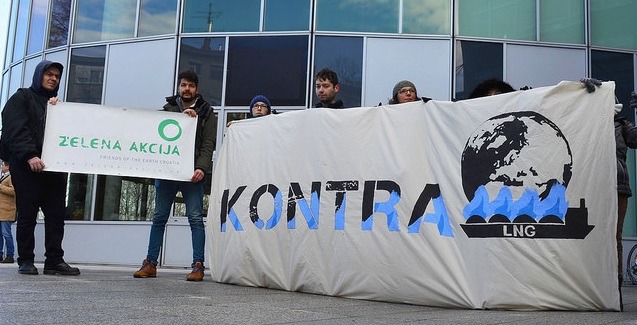 The Croatian government wants to build a fossil gas terminal on the island of Krk, the most populous island in the Adriatic Sea. This project is unnecessary, unwanted and damages climate and the environment, argues Marija Mileta from Zelena akcija/Friends of the Earth Croatia.

In spite of world leaders’ stated ambitions to limit climate change in the Paris Agreement, our climate keeps deteriorating. This is no accident, and what is happening in Croatia is a perfect example of what’s going on – our decision-makers talk a good climate game, but continue to fund fossil fuels.

Last month, the European Commission pledged political and financial support to what it considers as the essential projects for Europe’s future energy system. Unhappily, the list (the ‘Projects of Common Interest’, or PCI list) is full of high-carbon fossil fuel projects, 100 of which support fossil gas infrastructure. In practice, this means mega offshore and onshore pipelines, and big liquefied natural gas (LNG) terminals. On the list is a deeply unpopular terminal that has been discussed over 20 years, just off the coast of Krk.

Any new fossil gas infrastructure is incompatible with a safe climate future, but as we see in Croatia, citizens are stepping up where our politicians are letting us down.

What has happened so far

The Croatian government has been talking about building an LNG terminal since the 1990s. In 2008, it decided that the terminal would be built onshore, on Krk island, near Rijeka. The terminal’s initial annual capacity was planned to be three times Croatia’s annual consumption. In 2015, the government turned it into a strategic investment project, completed an environmental impact assessment procedure and was granted a location permit. In 2016, it was decided to accelerate the project by adding a floating terminal at first, with the on-shore terminal coming later. Ironically, in the meantime, Krk authorities have published a roadmap to rapidly shifting the island to 100% renewable energy.

The arguments used to promote this project are highly questionable. Why would a new major gas project be needed in Croatia in times of climate crisis, and with gas demand in Croatia having declined by more than 20% between 2010 and 2015? The Croatian government argues that instead of depending on gas imports, especially from Russia, they are aspiring to become a regional gas hub in the Balkans. Notably, the US and its fracking industry are also pushing leaders in the region to support this project, which would be used to bring climate-wrecking and environmentally destructive shale gas from the US. In the end, it’s a geopolitical game between the EU, Russia and the US while those who will bear the negative consequences are the communities of Krk island.

Despite these incoherencies, the project was part of the first European Union’s PCI list in 2013. Thanks to this, in 2017 the EU granted €102 million of taxpayers’ money to LNG Croatia, the state company responsible for the floating LNG terminal. This is approximately a third of the estimated costs needed for the terminal. The EU has also granted almost half of the amount needed to build a pipeline that would connect the terminal to the existing gas transport system in Croatia, thus enabling gas flow from the terminal to the rest of Croatia and neighbouring countries.

To make it happen even more quickly, the Croatian government has announced the preparation of a law specifically tailored for the project, which would give a direct sea concession and sort out property issues, thus accelerating the process, to the detriment of several environmental standards.

The project is close to getting an environmental permit, but the local resistance is growing

The floating LNG terminal was deemed environmentally acceptable in an Environmental Impact Assessment carried out by a Committee from the Croatian environment ministry, despite big opposition from citizens and civil society.

Criticism was sidelined. In a public consultation on the Environmental Impact Assessment for the Floating LNG terminal, 80% of the objections were not accepted. For example, there were objections to the use of seawater and chlorine for regasification. The authors of the study assessed this to be environmentally acceptable, although experience elsewhere tells us the opposite is true. In Italy, near Porto Viro, the use of chlorinated seawater – which is released from the LNG plant – for the regasification process has already been proven to have a significant negative impact. On the Krk case, over 160 institutions, NGOs and individuals warned that this project is extremely damaging to the environment, climate, tourism, and, in addition, is economically unprofitable and unsustainable.

On March 8th, Zelena akcija/Friends of the Earth Croatia organised an action in front of the Ministry of Environment, urging the Committee not to give the green light to the project and protesting against the acceptance of the impact assessment. It is obvious that the environmental impact assessment procedure serves only only to justify this and similar projects, while public participation has turned into a farce. Zelena akcija/Friends of the Earth Croatia is opposed to the construction of both the floating and on-shore LNG terminals, and has launched a new campaign aimed at stopping the project as well as all new gas infrastructure in Croatia.

Gas is not a ‘transition fuel’ to a low-carbon future: far from it. It will extend our dependence on fossil fuels, slow down the transition towards a low-carbon economy and exacerbate the already existing consequences of climate change. This new gas infrastructure is designed to last for at least 40 to 50 years, well beyond the time when we’re supposed to have completely phased out fossil fuels to stand a chance of not overshooting the irreversible 2°C global warming threshold.

All local municipalities of the island of Krk, as well as the Primorje-Gorski Kotar County and the City of Rijeka have clearly stated their opposition to the floating LNG terminal. The project is also opposed by citizens, as shown by a major protest in Rijeka held on March 3rd 2018, which was attended by thousands of people. An online petition initiated by the Municipality of Omišalj (where the terminal is supposed to be built) against the floating terminal has so far been signed by more than 14,000 people.

The ministry is approaching a final decision on the environmental permit. In case they issue it, Zelena akcija/Friends of the Earth Croatia will start legal proceedings, among other activities, in their campaign to block the terminal’s construction.