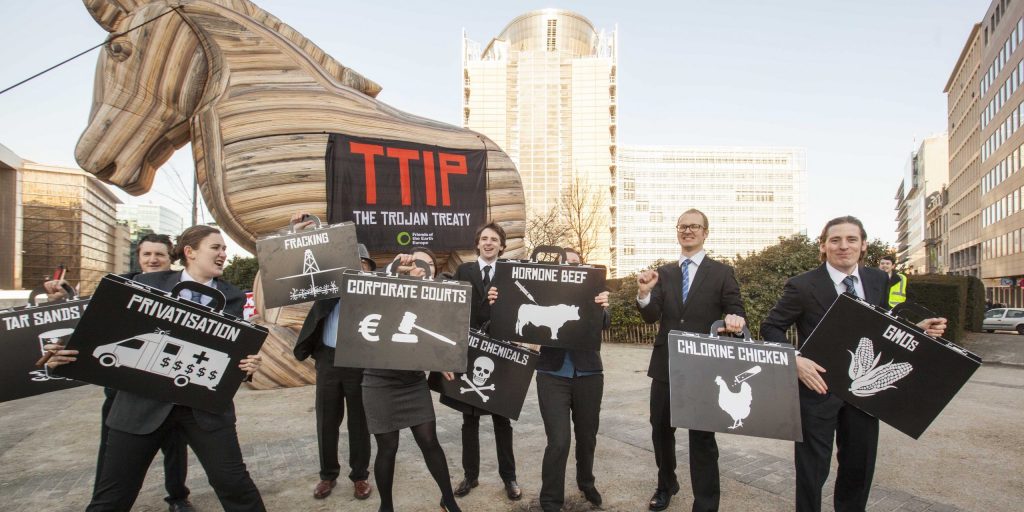 Five EU member states – Austria, Finland, France, Germany and the Netherlands – are pushing for corporate super-rights in Europe behind the scenes, despite the same German, French and Austrian governments having previously publicly criticised these secret courts. The proposed expansion of the so-called Investor State Dispute Settlement (ISDS) mechanism would cover all cross-border investments in the EU, creating incalculable liabilities for government policies and eroding democratic decision making.

A bit of background

In the 1990s, many two-way investment agreements (bilateral investment treaties – BITs) were concluded between European countries, which generally included ISDS mechanisms. Currently there are about 190 BITs between EU Member States, the vast majority of which are between western European countries and those in central and eastern Europe. These agreements are the basis for a large number of past and ongoing ISDS cases against EU Member States.

Now the European Commission has ordered member states to terminate their BITs, because they undermine the EU’s legal order and cause discrimination in the internal market. While the five countries recognise the obligation to cancel their existing trade agreements, they propose replacing them with an EU-wide ‘super-ISDS’ system that would cover investments between all EU member states.

Six things you need to know about this dangerous proposal:

1. It would massively expand ISDS across Europe – further threatening public policies across the continent.

There are currently about 190 BITs between EU member states. The proposal would roll out corporate courts covering investments between all 28 EU member states. That’s equivalent to 378 BITs – almost double the number existing today. Worse, a lot of countries with high foreign direct investments, such as France, Germany and the United Kingdom don’t have BITs with each other. The amount of investments covered by the proposal would thus increase manifold, multiplying the risk for costly lawsuits against public policies in the EU.

2. It would give extra rights to corporations, not to citizens

The five countries justify the need for ISDS within the EU by claiming that “national judicial systems can give rise to concern”. However, they don’t mention any additional legal remedies that should be made available to citizens or domestic investors. Instead of improving the legal systems for everyone in the EU, the proposal would give privileges only to foreign investors. If the quality of the legal system in the EU was recognised as a problem, it needs to be fixed urgently – for everyone, not only foreign investors.

3. It confirms that foreign investors get extra rights through ISDS

This doesn’t come as a surprise to anyone who has looked into the way ISDS works in TTIP and CETA. By giving foreign investors an additional legal avenue through biased corporate tribunals, it provides them with extra rights. Yet, this has been denied recently by Trade Commissioner Cecilia Malmström.

In the paper the five governments now admit that foreign investors enjoy greater rights through ISDS: “If EU investors are not afforded comparable protection as their foreign competitors, incentives for EU investors to locate their foreign investments outside the EU will be created and the functioning of the internal market will be compromised.” But instead of dismantling this unjust and discriminatory system, the five governments propose to expand it.

4. It wants to introduce ISDS across Europe for the sake of trade negotiations

Incredibly, the five countries argue that an EU-wide ISDS mechanism is needed to strengthen the EU’s hand in trade negotiations. It shows a push to subordinate European policies to international trade negotiations, like the TTIP. In order to remain ‘credible’ when negotiating with its trading partners, the five governments are willing to jeopardise the EU legal system. The paper reveals a line of thinking, already seen in chapters of the TTIP negotiations, to consider trade and trade negotiations ahead of any other policy objective.

5. It confirms doubts about the legality of ISDS

The countries are very cautious about the possible structure of an ISDS mechanism in the EU. They lay out a set of options about what an institutional set-up could look like without going into too much detail. This section of the document is peppered with phrases such as “subject to further legal assessment” or “further explore ways to develop an EU-compatible mechanism”. While a problem of compatibility between the EU legal order and ISDS has been denied by European governments and the European Commission, this paper shows that behind the scenes there is a great deal of concern about possible clashes. Unsurprisingly this point has been argued by civil society organisations for a long time.

6. It very closely mirrors a proposal made by the big business lobby group BusinessEurope earlier this year

Many of the ideas and proposals in the paper are identical or very similar to what BusinessEurope proposed in February this year in a lobby letter to the European Commission. While the BusinessEurope letter talks of provisions that are “codified differently” and “not part of a unique legal framework”, the government paper mentions rights that are “not codified […] in a single framework”. If not outright copied, the thrust, ideas and concrete proposals of the government paper seem heavily inspired by the BusinessEurope lobby letter.

It is outrageous how some of the same governments that have criticised the ISDS system, like Austria, France and Germany, are now trying to massively expand it through the backdoor. A Commission trade spokesperson noted that BITs “are incompatible with EU law and create legal uncertainty because of their overlap with EU rules“, to which Friends of the Earth Europe would only add that any kind of privileged legal mechanism for investors – whether through BITs, investment treaties or trade agreements – is deeply unjust and better abolished today than tomorrow.

[1] The proposal, a “non-paper” dated early April 2016, had been submitted to the Trade Policy Committee, a body in which EU member states discuss trade policy issues with the Commission, and was sent to some departments of the European Commission directly. [2] Investor-state dispute settlement (ISDS) is a provision generally included in bilateral investment agreements (BITs) – agreements between two countries that grant extra protection for investments from overseas companies. It allows foreign investors to seek financial compensation from host countries in secret, business-friendly tribunals if they deem that their investment potential or profits are affected by changes in the host country’s policies or regulations. If a government loses a case, it has to compensate the investor from taxpayers’ money with payouts which can easily reach hundreds of millions or even billions of Euros. Find out more here.