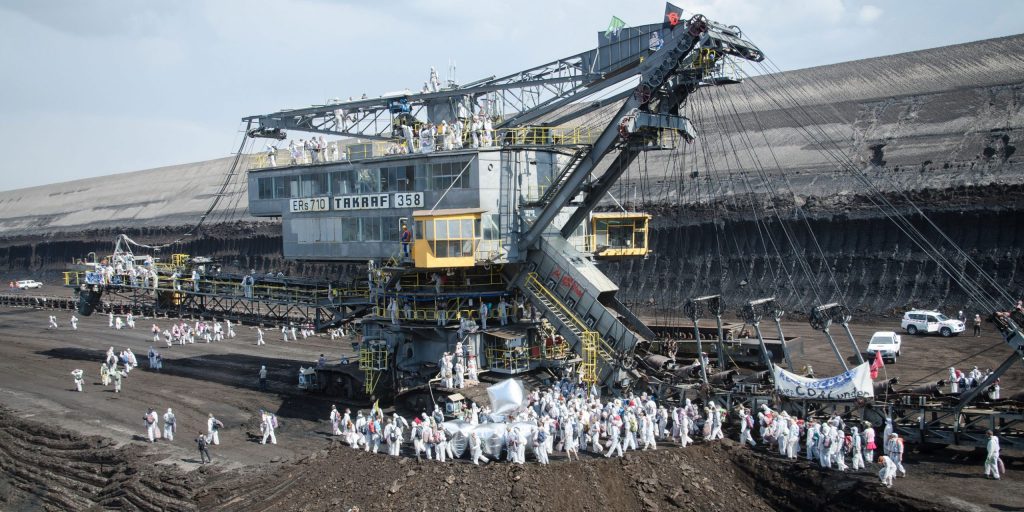 On the second weekend of May, thousands of people from across Europe gathered in a small corner of Lusatia, close to the German border with Poland. They were there for a weekend of anti-coal stunts and actions including a climate camp and demonstrations, next to one of the most polluting coal mines in Europe. In parallel, many participated a direct action under the banner of Ende Gelände (here and no further) with the aim of shutting down the mine – and they succeeded.

The coal in Lustasia is wet, brown coal – lignite – the most climate-damaging coal in the world. Germany plans to phase out coal by 2050, but our planet simply doesn’t have that much time.

At the rally at the end of the demonstration there was a speech given by Andreas Link from the BUNDjugend national board and Kerstin Hülsmann from BUNDjugend Saxony. They spoke passionately about how climate change is linked to the global issue of our economic system and local struggles with the exploitation of coal. They drew a line from the Paris climate agreement to lignite mining in Lusatia, highlighting why so many international activists made it here, concluding that “we can no longer wait for action on climate, we need to take the phase-out of coal into our own hands.”

Max from BUNDJugend/Young Friends of the Earth Germany reflected on the weekend:

“I was impressed with the character of the camp. I’ve been to several previous climate camps in Lusatia, and this year seemed to me the biggest camp that there has been. As in previous years the camp combined elements of action, learning and getting to know each other, but this time the camp was far more international.

“This was not just great for me personally but I think also for some people living in Lusatia: I joined an info point at the market square of Welzow, where I invited the local citizens to join the demonstration to phase out of coal on the Saturday.

“As expected some local people showed their opposition to the climate camp. They or their relatives work in the coal industry or see it as an important economic driver in the region. However many citizens applauded and encouraged us. They felt left alone in the struggle against the polluting coal industry, and many had had already lost their homes or will soon if the pit continues to expand. These people were hopeful that coal mining will now receive wider attention outside Lusatia, and I later met some of them at the demonstration.”

In parallel, the Ende Gelände direct actions targeting the open mining pit, with activists occupying sites on the mine and blocking coal trains. Between Friday and Sunday, excavation was stopped in part of the pit and 80 coal train trips were stopped between the mine and the power plant that burns its coal, which powered down to just 20% of its capacity.

We also spoke to some of the people who joined the direct actions:

“We expected a police blockade. We expected some sort of resistance. Instead, as our white-overalled swarm snaked off into the distance, through the leafy woods and out of sight, we began to realise that “we are unstoppable” wasn’t just something we were chanting: it was a very real description of what was going on.

“A police car backed up the tail end of the march, blaring a looped recording explaining that we were entering private property, and that we were trespassing on Vattenfall’s property. Illegal? Maybe. Immoral? Definitely not. We turned off the road and left the police behind.

“The coal mine we spent that day in is produces 20 million tonnes of coal every year. And it’s huge: the pit stretches off into the horizon, with giant building-sized machines barely visible in the distance.

“And it’s growing. Farmland is being chewed up and spat out as the pit is dug out and expanded by vertiginous ‘Baggers’ – huge digging machines designed to mutilate the Earth. Its expansion also means there are no fences around the mine. Why build one if you’ll have to knock it down two weeks later?

“It is also extremely depressing. It is a dead space where nothing grows, where the air is toxic with radiation and thick black dust. There’s real happiness when we finally clamber out of the pit and find ourselves walking back through lush Saxonian forests. Next time someone tells you that wind farms are a blight on the landscape, show them a coal mine.”

“On Friday I joined the ‘blue finger’ – a group of hundreds of people who entered the pit. We were in the deepest part of the mine, where we danced on the diggers and enjoyed ourselves. It was one of the deepest experiences of my life. I’ve never seen such a destroyed landscape. It was like we were on another planet.

“The next day I joined the blockade of coal trains on the train tracks from the mine to the plant. It was also nice experience, spending day and night outside with all sorts of nice people, who were resolved to block power plant in the cold and rain.

“Coming from the Czech Republic, we were really interested in Ende Gelande this year, because the Czech corporation EPH looks like it will buy the mines and power plants in Lusatia from Vattenfall. Their owner Daniel Křetínský is an oligarch with a poor reputation in our country, having been named in the Panama Papers, and having been investigated by the European Commission.” 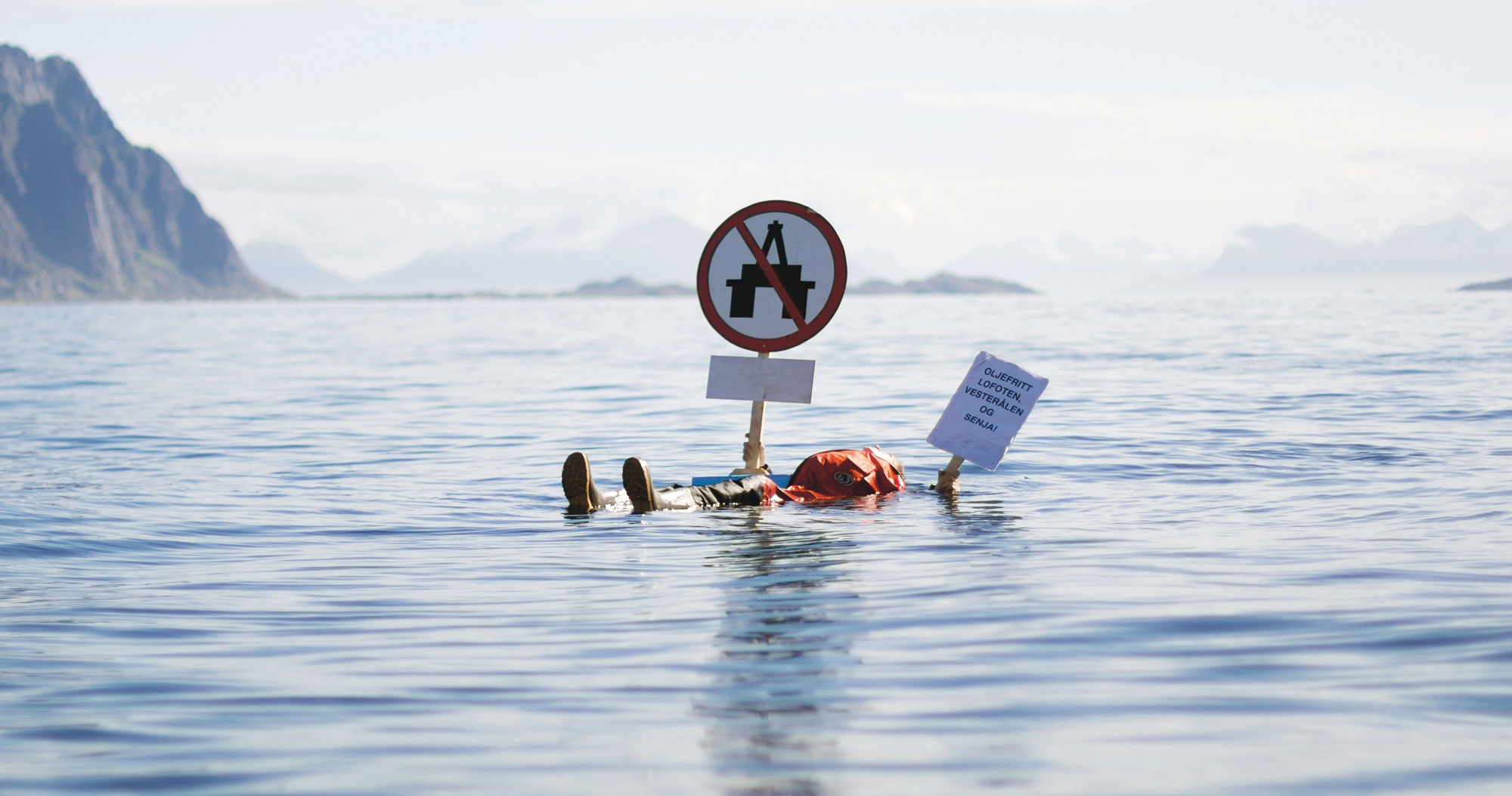 “I had a little bit of vertigo as I climbed one of the biggest machines in the world. I tried not to look directly down. Instead i looked to the horizon of the lunar landscape before me and as far as the eye could see was sand and coal dust. I was with thousands of others taking part in an occupation of one of Germany’s largest opencast coal mines. It felt powerful to be with so many others going directly to the destructive machines and stopping them.

“Nearby is the town of Proschim which is slated for destruction by the expansion of this mine. Proschim like many villages in Germany has a community energy project where they produce their own energy from wind and solar, but all this will be destroyed if the mine is allowed to continue to expand. And I thought about all the community energy projects that I know that are fighting to change our energy system, and I thought we’ve got to win this thing.”

The next stop for the European climate justice movement is in August, where a climate camp in the Rhineland will feature action training and a degrowth summer school – more information here.