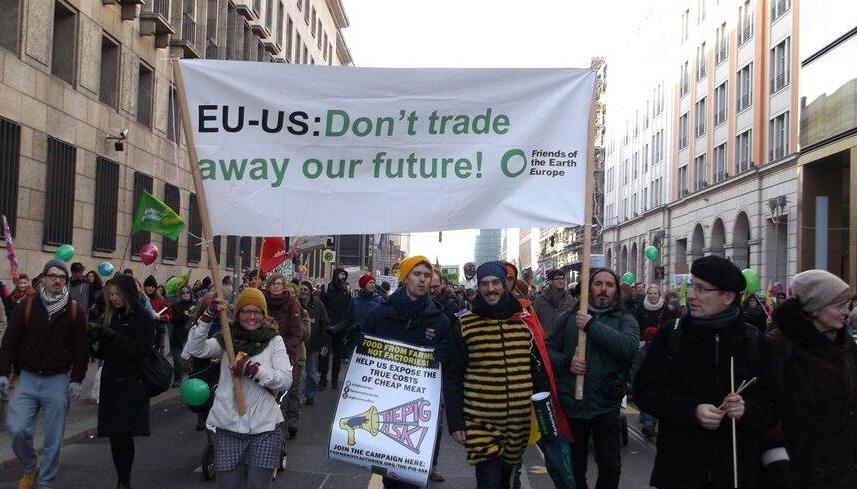 2014 will be a crucial year for trade negotiations between the EU and US. But the year is beginning with the talks still surrounded in secrecy, as Friends of the Earth Europe campaigner, Natacha Cingotti, reports from a stakeholder event in Brussels.

Negotiations on a Transatlantic free trade deal are advancing but remain shrouded in secrecy.

The EU’s negotiating mandate for the Transatlantic Trade and Investment Partnership (TTIP) has never been officially published, despite being agreed more than six months ago, and what is being discussed behind closed doors remains top secret. No wonder public opposition is growing by the week.

Faced with mounting criticism, the European Commission is going to great lengths to promote its engagement with stakeholders and defend the transparency of these trade talks.

The problem is, with so much secrecy it’s difficult to be very transparent. The latest example is the ‘Civil Society Dialogue’ that took place in Brussels last week (January 14). EU deputy chief negotiator Damien Levie along with 15 lead negotiators held a two-hour question and answer session with over 150 interested stakeholders.

Of 196 registered participants, 123 represented business, 40 NGOs, 8 trade unions, and 2 small and medium enterprises. One would have thought that there is enough dialogue between the Commission and industry for it not to be necessary for business to dominate supposedly public spaces such as this.

New information about what is actually being discussed between the two blocks was also not exactly forthcoming. The deputy chief negotiator started by providing a rushed, superficial overview which was difficult to follow – even for those familiar with the topic. No documents were distributed and no details were given of which topics and sectors have and have not been covered in the rounds of talks so far, or of what actual progress has been made. So much for the Commission’s assertions of transparency.

Even basics, such as the timetable of the negotiations and when the next meetings will take place appear shrouded in secrecy. Asked twice about the calendar for the upcoming rounds, including the stock-taking exercise between US Trade representative Michael Froman and EU Commissioner Karel De Gucht that was announced for early 2014, the Commission answered that, “exact dates will be known later”.

Legitimate questions from genuine civil society were poorly answered, making the Commission’s arguments about openness even less convincing, and raising further suspicions about the TTIP being used as a vehicle for powerful business interests. Reacting to a remark about generic medicines, the Commission spokesperson stated that the, “industry wish list is being considered seriously”. When confronted with concerns from consumer groups that their voices are not heard equally with those of industry on the topic of intellectual property (IP), the Commission had no better arguments than references to, “economic analysis [that] shows that IP-intensive industries are responsible for millions of jobs in Europe” and that they would “like to see what IP can do for consumers”. A definitive list of concerns to be addressed would have been a more appropriate response.

In a context of very strong industry attacks on public safety standards – as in the case of food safety – civil society concerns remain unaddressed. Asked about genetically modified organisms, the Commission merely stated that there is, “very little we can say […], except that we don’t want to lower our standards”.

The current level of transparency and accountability around the trade talks is totally insufficient. The stakes are so high that ignoring calls to open-up the process will only result in growing public opposition to this free trade deal. All negotiating documents must be published and full engagement of civil society must happen at all steps.