After decades of neglect, it’s time to clean up Ogoniland’s oil pollution 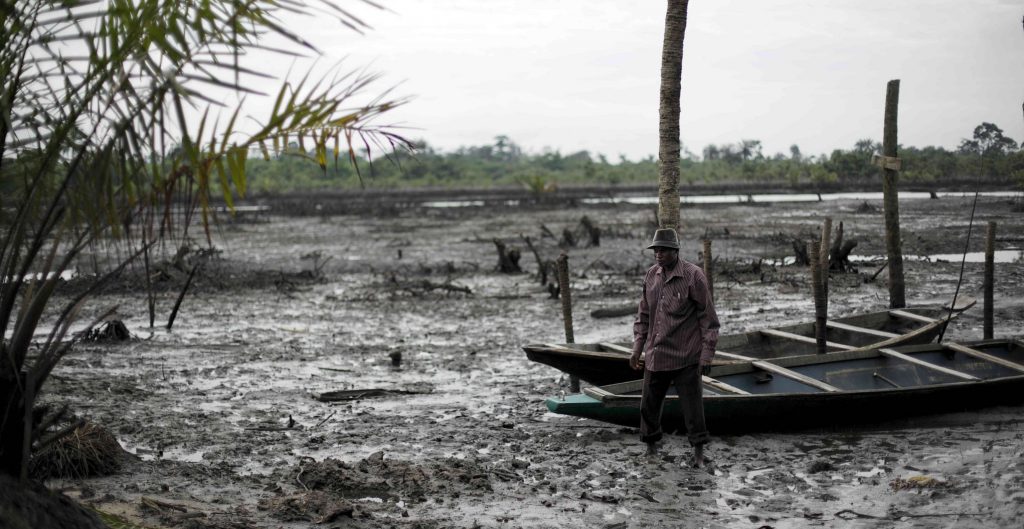 Today, Nigerian and international civil society organisations repeated their call for the immediate start of the long overdue clean-up of oil pollution in Ogoniland in Nigeria’s Niger Delta. This should be undertaken in line with recommendations made by the United Nations Environment Programme (UNEP) in its landmark 2011 study of the region. The conclusion of the UNEP report was that Shell had, for years, not cleaned up oil pollution properly. As a result of the oil industry pollution, hundreds of thousands of children, men and women have been exposed to a sustained assault on their human rights to food, water, health and work.

Shockingly, despite UNEP’s 2011 recommendations, communities affected by decades of oil spills continue to live amongst severe contamination. The Nigerian Government officially launched a clean-up programme in Ogoniland two years ago; however, communities are still waiting for emergency measures to be taken and clean-up to begin. The emergency measures identified by UNEP warranted immediate action on drinking water and health protection.

The Nigerian Government has taken administrative steps such as putting in place the governing structures required for carrying out activities on the clean-up project and has appointed a coordinator to lead the Hydrocarbon Pollution Remediation Project (HYPREP), the implementation agency. The government also advertised for contractors to deliver projects that would ensure the clean-up and remediation of oil impacted sites in Ogoniland and of the widespread contamination of Ogale’s groundwater, water sources and drinking water.  But seven years after publication of UNEP’s report, very little meaningful progress has been made to improve the situation on the ground, either by the Nigerian Government or by Shell, the main operating company, in the area.

‘’Seven years is too long for any people to have to wait for their air, land and water to be free from toxic oil pollution. After decades of suffering it’s time the people of Ogoniland to live free of the oil industry’s negligence. It’s time to implement the clean-up now’’, said Godwin Uyi Ojo, Executive Director, Environmental Rights Action/Friends of the Earth Nigeria.

“It is time for action not words. The government was right to promise the clean-up of Ogoniland but it now needs to fulfil that promise. It is simply not right that people should continue to live in such a damaged environment and forced to drink contaminated water.” said Osai Ojigho, Director, Amnesty International Nigeria.

1. Failure to establish a billion-dollar fund

UNEP called for an initial billion dollar fund to begin the clean-up which may take up to 25 to 30 years. Despite the promises of the Nigerian Government, Shell and the other oil companies, this has yet to be delivered. HYPREP has set up the ‘Ogoni Trust Fund Account’ so there is no reason to delay the transfer of the money any further.  In addition, the companies appear to be trying to cap their contribution to this initial billion. The government needs to pressure Shell and the other oil companies to commit to fund the full clean-up of Ogoniland.

UNEP called for emergency action to ensure communities have access to clean drinking water. Action in the community of Ogale has been included as a separate emergency measure, as the Ogale people have been consuming water with benzene over 900 times the WHO guideline.  Seven years later communities are still waiting for clean and safe drinking water supplies. The Nigerian Government and the oil companies must now immediately ensure sustainable access to clean water and address the situation in Ogale with full urgency.

UNEP recommended a comprehensive medical examination of everyone who has consumed contaminated water by physicians knowledgeable about the possible adverse health effects of hydrocarbons.The recent health outreach programme in the region, while welcome, is far too limited in scope and does not make mention of including these health experts. It is unclear what is done with the additional recommendation to track the health of the Ogoni community over their lifetimes and to ensure swift action if health impacts are identified.

4. Failure to require companies to step-up and properly clean-up

With the continued use by the oil companies of the discredited RENA method of clean-up we are concerned that the people of Ogoniland will be left with oil pollution even after any clean up. The clean-up must be carried out to the highest international standards and be overseen by credible, independent international experts with no conflict of interest.

We call on the Nigerian Government to take immediate action.

HYPREP announced that they would begin the clean-up with 26 polluted sites in August this year. As several announcements have been made in the past, it is only when works begin that we will be confident that clean-up has begun.

It is also crucial that HYPREP involves all relevant stakeholders in the steps they take and guarantee a flow of up to date information to the public published on a dedicated website. The work plan and other key documents should be made public so that stakeholders can assess all the planned activities, progress, milestones, effectiveness, efficiency and successes. The justification for and selection of sites for clean-up should also be transparent. Full transparency will be vital for the confidence of all stakeholders in the process.

After decades of living with oil pollution, ceremonies are not enough. It’s time for clean-up.