Fuelling the crisis in Mozambique 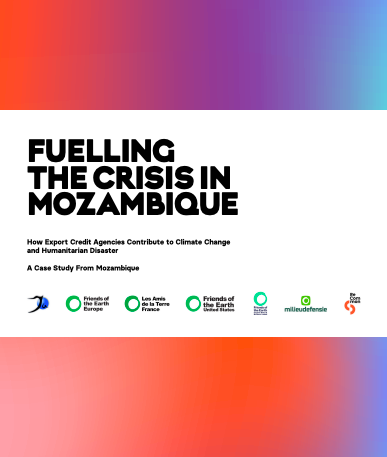 A decade ago, Cabo Delgado in northern Mozambique was a peaceful, lush and green coastal province. The region had a large rural population of farmers and fishers, and a thriving tourism industry. There were issues such as poverty but overall, communities had their territories, free access to water, sea and forests, and sustainable livelihoods.

That all changed as soon as gas was ‘discovered’ off the pristine coast of Cabo Delgado in the north of Mozambique. The province turned into an illustration of the merciless and irreversible destruction caused by the fossil fuel industry in the global South. Since moving in, the fossil industry has left thousands of people displaced and without livelihoods, ruined the environment and fuelled an ongoing violent conflict that has turned nearly 1 million people into refugees and killed thousands.

This report, written by Friends of the Earth groups and partners in Mozambique looks into the economic model that enables corporations and governments to violate human rights and the climate with impunity.

It specifically looks into the financial support provided by Export Credit Agencies (ECA) which cover the financial risks of companies operating abroad by using public funds. It’s more than likely that the gas projects in Mozambique wouldn’t have materialised without this funding.

The grounds on which the ECAs in countries like the Netherlands, France, Italy, the UK and the US, have approved their support are incompatible with the Paris Agreement as well as national and international agreements on responsible governance.

The report also underlines the urgent need for laws to hold companies accountable for human rights violations and environmental and climate harms. The EU’s recent draft proposal for a due diligence law needs to be strengthened to obligate companies to cease activities that are not in line with the Paris Agreement and to ensure that people whose rights are violated can take corporations to court in the EU.

Read the full report, including a detailed list with recommendations in three key areas:

1. Recommendations related to the LNG projects in Cabo Delgado, Mozambique