EU and UN instruments must work in tandem to guarantee justice 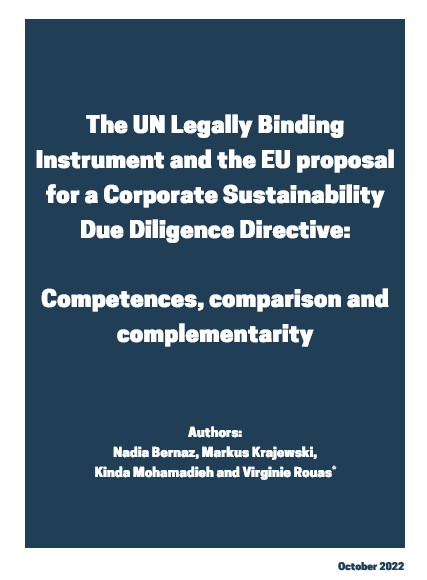 The UN Treaty aimed at regulating the activities of transnational corporations and other businesses (also commonly referred to as the Legally Binding Instrument, or LBI), and the proposed EU Directive on corporate sustainability due diligence (CSDDD) are two legal instruments currently under negotiations.

The instruments, while different in nature, are comparable since both include provisions to regulate companies to respect human rights, by preventing and ceasing their negative impacts on people and planet, as well as rules to provide remedy and access to justice, with the UN Treaty having an important focus on transnational obstacles to justice[1]. In October 2021, civil society organisations published a briefing arguing that both instruments are necessary and should complement each other, ensure effective prevention and guarantee robust enforcement, liability and access to justice for affected people.

When the proposal for a European Due Diligence law was published in Feb 2022, it presented the opportunity to compare the two instruments substantively. CIDSE, ECCJ, ECCHR, FOEE, FIAN, FIDH and SOMO commissioned an expert study that analysed the division of EU and member state legislative competences on the LBI, as well as three content areas of overlap between the two instruments (the corporate due diligence duty, civil liability and access to justice rules). It illuminates how and where the two texts could be complementary and where they need further alignment to achieve an upward harmonisation of rules. The findings of the study make a strong case for an EU negotiating mandate.

The study provides a helpful outline of the competence division between the EU and the Member States. It notes that successful adoption of the CSDDD would mean a significant shift of legislative competence to the EU, as the EU would have legislation on a company’s responsibility to prevent, and cease human rights violations and environmental harm. On other issues, such as access to justice and applicable law, Member States’ competences (both shared with the EU and exclusive) come into play. Therefore, a mixed agreement for a negotiating mandate, with the Commission negotiating on behalf – and in strict consultation with Member States – should be the next step for EU decision-makers.

The CSDDD and the LBI are different in terms of substance as well as political and legal context. The nature of CSDDD tends towards a narrow approach that regulates a more detailed corporate duty and a limited set of enforcement and access to justice provisions, whereas the treaty is a multilateral instrument including a much broader set of elements.

In this context, it is crucial to assess how these two processes relate to each other. It is important to understand their degree of overlap, risks of contradiction or conflict, and where there are opportunities for mutual strengthening and complementarity.

The analysis demonstrates clearly that one instrument cannot simply replace the other, but rather are complementary. The LBI would not only mean a broader community of states regulating a duty to respect human rights and provide access to justice, it would also make the CSDDD much more effective on a global scale by aligning companies’ obligations across the world.

Content-wise, there are areas of convergence between both proposals, and ample opportunity for both processes to reinforce each other, as concrete proposals in one instrument can be used to improve the other. Neither instrument is without shortcomings when it comes to effective prevention and access to justice and remedy, but a comparison of their respective content is an important starting point for improving them.

For example, regarding the corporate duty to conduct due diligence, the study reveals that the CSDDD proposal, while containing many of its own weaknesses, does articulate a detailedduty for companies to address their adverse impacts, which could inspire the treaty. It includes a clear obligation to cease harms, which the LBI omits. On civil liability, the study finds that the liability in CSDDD is dependent on the failure of companies to meet certain due diligence obligations, and in some cases, liability could be avoided if specific due diligence measures were carried out. The LBI draft, on the other hand, clearly states that due diligence does not automatically absolve a company from liability for the harm caused, offering a broader liability regime and thus less chance for companies to avoid being held responsible for harms.

The CSDDD proposal also fails to address key barriers for rights holders’ access to justice, like having to carry the burden of proof, an absence of collective redress and representative actions, and unfair time-limits on bringing cases. In this regard, the LBI proposes a more holistic and coherent (albeit more general) approach to ensuring rightsholders have effective access to justice. On issues of international private law and adjudicative jurisdiction, which are so important to bringing judicial claims across jurisdictions, the study finds that the LBI is quite comprehensive. On the other hand, the CSDDD does not look at these issues as they are dealt with under other EU regulations[1]. Therefore, the LBI could complement the CSDDD strongly here, though there is an urgent need for the EU to engage in the negotiations to avoid a conflict of rules.

Aligning both processes through negotiation to ensure robust and effective instruments

To ensure future coherence, and strong protection for affected people, it is crucial for the EU to formally enter into the negotiations in the Open-ended intergovernmental working group (IGWG), mandated to develop the UN Treaty. Since the beginning of the IGWG process, a number of EU member states have shown continuous leadership and willingness to engage more substantially in the negotiations. The division of competences and the comparison of content within this study speak clearly to the need for a coordinated EU response, based on a negotiating mandate. It is the only route to advance and improve the discussions in Geneva but also to make sure that the European Directive is fit for purpose and able to tackle the challenges it set out to address for people and planet.

[1] Notably the Brussels I and Rome II regulations