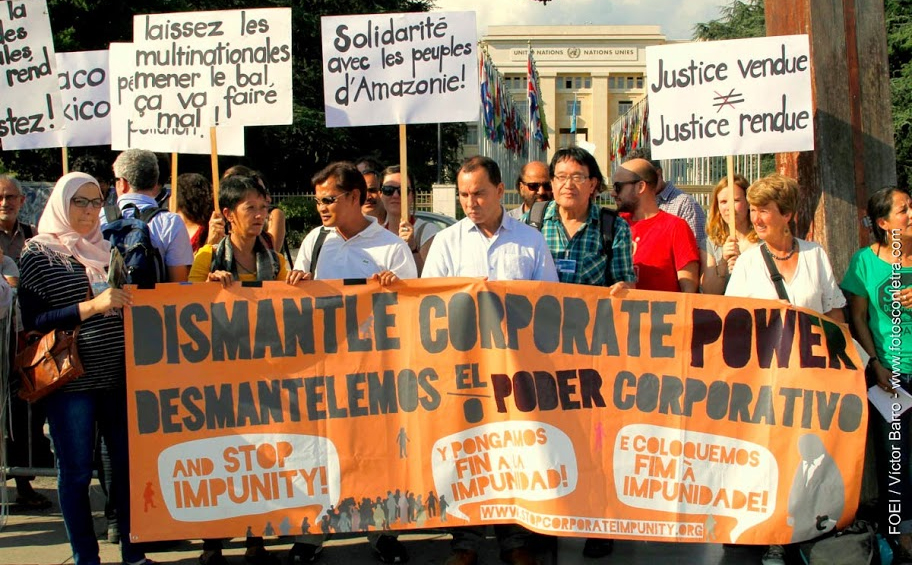 Friends of the Earth International and other social movements today celebrated a long awaited victory that has set in motion a mechanism to meet the demands of human rights defenders, and challenge corporate power. The time had finally come to move away from voluntary guidelines for businesses on human rights, and towards a legal framework to bring transnational corporations to justice for human rights violations.

On June 26th, a majority in the United Nations Human Rights Council (UNHRC) voted in favour of the resolution presented by Ecuador and South Africa to start developing a legally binding international instrument to regulate the activities of Transnational Corporations (TNCs) with respect to Human Rights

The resolution received affirmative votes from 20 member States on the UNHRCl, while 13 states abstained. This means that the initiative to establish a legally binding, international instrument has now been supported by 610 organizations, 400 individuals, 95 countries, the Subcommittee on Human Rights of the European Parliament, and the Vatican. When China and India, which represent more than 1/3 of world’s population, expressed support for the resolution, the plenary could feel a sense of victory approaching at yesterday’s 26th session of the UNHRC.

Jagoda Munic, Chair of Friends of the Earth International said: “This is indeed a significant and historic victory; a much-needed resolution for those who defend the environment, human rights and sustainable livelihoods from the violations of big business. It shows movement-building can really change the power balance and expose US and EU commitments to the corporate agenda”.

The US and the EU were not only fiercely opposed to the proposal, but used heavy-handed tactics to persuade other countries into siding with them by threatening them with cuts to financial and development aid. After threats of supposed “negative financial impacts” related to the proposal led by Ecuador and South Africa, the US said that “this legally binding instrument will not be binding for those who vote against it”, exposing its lack of political will to commit to binding obligations for big business to address environmental and social injustices and its disrespect for democratic processes. 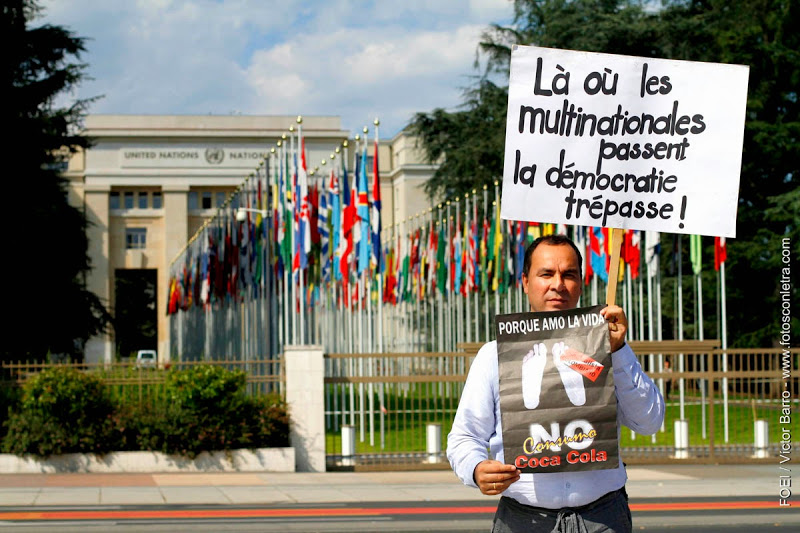 “According to the EU and Norway, the longer we speak about the need for a binding treaty, the more companies are discouraged from taking voluntary action. We believe the opposite: although both proposals are complementary, the longer we delay a binding treaty, the longer companies will continue to act with impunity, and the more environmental defenders’ rights are abused”, said Anne Van Schaik, accountable finance campaigner at Friends of the Earth Europe.

For Lucia Ortiz, Friends of the Earth International economic justice program coordinator, “it is a big success for social movements, and alongside our allies we have worked for a long time towards a legally binding international treaty to bring corporations to justice and prevent them from acting with impunity.”

Friends of the Earth International was part of this historic achievement. It has worked with the Treaty Alliance on advocacy work in Geneva and in important capitals across the world, inclduing in the EU, South Africa, Costa Rica, Mexico and Brazil. On the week of mobilization organized by Swiss NGOs and the Campaign to Dismantle Corporate Power, Friends of the Earth groups from Europe, Nigeria, Uruguay, Palestine, Guatemala, Brazil and Real World Radio presented cases of human rights abuses by TNCs at the special session of the Permanent Peoples’ Tribunal. They were also present at side events and street protests, denouncing human right abuses by TNCs such as Shell, Mekorot, Hidralia, Philip Morris and FIFA.

Environmental defenders deserve and demand a legally binding treaty to bring corporations to justice. But they also demand community access to justice, the right to protest, reparations and restoration of damaged environments and livelihoods, and criminal liability for corporate offenders [1].

“We can now proudly say that the world from now own might be a better place to live for our children. That said, they will also have to fight to secure this victory, as will we. We will have to fight together with movements and states to implement the resolution to ensure the creation of an legally binding international agreement from here on out”, said Alberto Villarreal, trade and investment campaigner at Friends of the Earth Uruguay

[1] Friends of the Earth International recorded more than 100 incidents of violence against environmental rights defenders and violations of their rights in 27 countries around the world between November 2011 and October 2013. The full report can be found here.