Transparency still out of sight on lobby register’s second anniversary 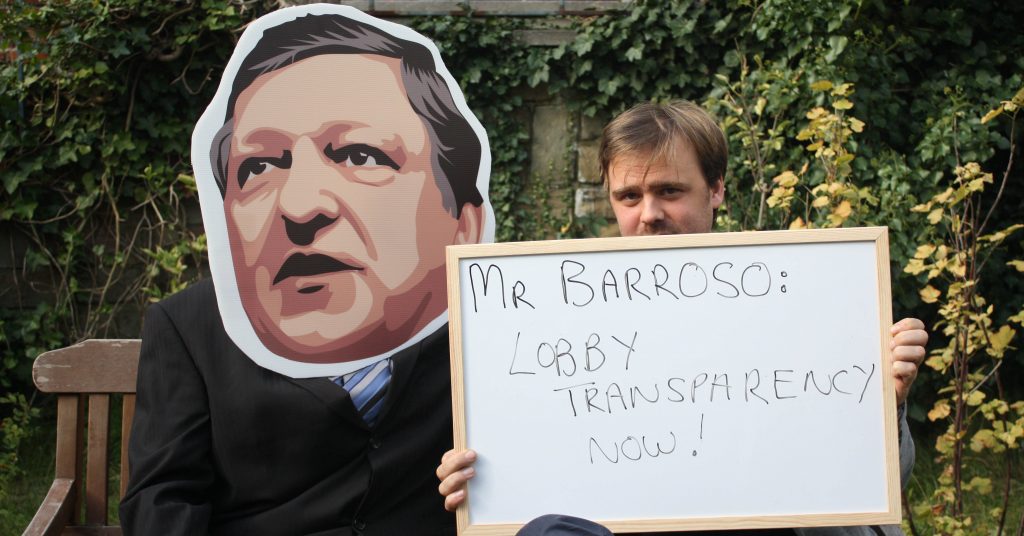 Two years after its introduction the European Commission’s lobby register has failed to bring lobbying into the open, the Alliance for Lobbying Transparency and Ethics Regulation in the EU (ALTER-EU) said today. The group used the anniversary of the register to call on the Commission to take urgent steps towards a mandatory, joint register for the European Commission and European Parliament with improved transparency standards.

While the European Commission continues to spin the register as a success, the reality is quite different. New analysis by ALTER-EU shows that only a minority of Brussels lobbyists are registered.

Only 1068 organisations with a Brussels office are registered. This figure compares to the European Parliament’s estimate of 2,600 lobby groups with offices in Brussels in 2000, and suggests well under half of Brussels-based lobby organisations and firms have signed up after two years. [1]

Key sectors like lobbying consultancies and corporate EU affairs offices are massively under-represented. ALTER-EU has found out that of a group of 328 consultancies identified as providing EU lobbying services, 163 are listed on the Commission’s register (50 per cent).[2] A report by Friends of the Earth Europe showed that 20 of the largest 50 EU companies (40 per cent) are not signed up to the register.[3]

“When two years after the launch of the register only a minority of Brussels lobbyists are registered, it is clear that the voluntary approach has failed,” said Olivier Hoedeman from Corporate Europe Observatory. “The European Commission must now make a commitment to introduce a mandatory lobby transparency system that enables European citizens to see who is influencing EU decision-making, on which issues, on whose behalf and with what budgets.”

As part of its 10-point action plan for transparency and ethics reforms [4] ALTER-EU suggests a two-step approach to secure a high-quality lobby transparency system:

a mandatory register covering all EU institutions to be achieved by the end of this Commission term;in the short term, the Commission and Parliament must act with determination to make registration a de facto obligation for all actors involved in EU lobbying (including law firms and think tanks) and to improve the reliability of the information disclosed.

ALTER-EU believes significant progress can be achieved with a new joint transparency register currently being negotiated between the Commission and Parliament.[5] A far larger share of Brussels lobbyists would be forced to provide information if registration is made a condition for lobbyists holding access passes to the Parliament. The current negotiations are also a crucial opportunity to fix the flaws in the Commission’s register and introduce more detailed financial transparency requirements, removing the exemptions for large lobby consultancies which only provide very limited information.

“It is high time to close the loopholes and tighten the weak financial disclosure requirements which allow lobby groups to disguise the size of their lobbying effort and make it impossible to determine who the biggest spenders really are and which policies they are trying to influence,” said Natacha Cingotti from Friends of the Earth Europe.

Notes to the Editor:

The report was published in April 2010. Important companies missing from the register include Royal Bank of Scotland, Deutsche Bank, Nestlé.

[4] The action plan is part of the ALTER-EU’s new book, “Bursting the Brussels Bubble – The Battle to expose corporate lobbying at the heart of the EU” on http://www.alter-eu.org/book/bursting-the-brussels-bubble

[5] The joint EP-EC High Level Working Party resumed its talks on a joint lobby register on 6 May 2010. The HLWP is composed of Commissioner Maroš Šef�ovi� and MEPs Carlo Casini, Isabelle Durant, Jo Leinen and Diana Wallis.

The Alliance for Lobbying Transparency and Ethics Regulation (ALTER-EU) is a coalition of over 160 civil society groups, trade unions, academics and public affairs firms concerned with the increasing influence exerted by corporate lobbyists on the political agenda in Europe, the resulting loss of democracy in EU decision-making and the postponement, weakening, or blockage even, of urgently needed progress on social, environmental and consumer-protection reforms. See www.alter-eu.org