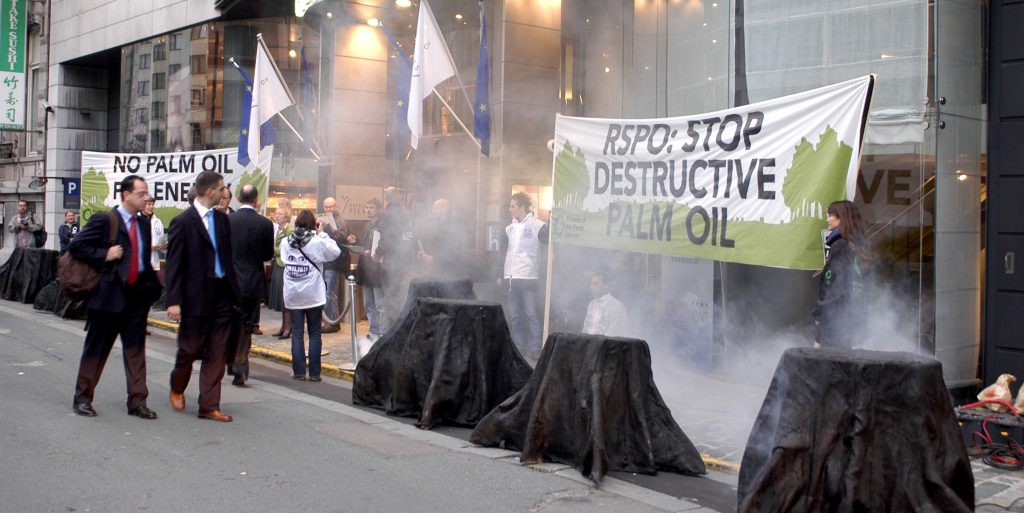 BRUSSELS (Belgium) / LONDON (UK), 9 January 2008 – Friends of the Earth Europe has welcomed a ruling today by the UK advertising watchdog that describing palm oil as “sustainably produced” is false advertising.

The UK Advertising Standards Authority (ASA) ruling followed a Friends of the Earth Europe complaint against an advert by the Malaysian Palm Oil Council. [1]

The advert, which appeared on the TV channel BBC World in the summer of 2007, was deemed to have used highly misleading wording and imagery. Footage of a palm oil plantation was interspersed with shots of pristine rainforest, and accompanied with claims that palm oil is “a gift from nature, a gift for life”, that “its trees . help our planet breathe”, and declaring that Malaysian palm oil has been “sustainably produced since 1917”.

Friends of the Earth Europe complained that the statement “sustainably produced since 1917” is untrue: most palm oil is produced in a way that is not at all socially or environmentally sustainable.

The campaigning group also protested that the advert as a whole was misleading because it implied that palm oil production benefits the environment. Research shows that 86 per cent of all deforestation in Malaysia between 1995 and 2000 was attributed to palm oil development, threatening species such as the orangutan and the proboscis monkey as well as causing social problems for the people who live or depend on the forests.

The draining and deforesting of peatlands in South-East Asia, predominantly to make way for palm plantations, releases huge amounts of soil carbon into the atmosphere, accounting for a massive 8 per cent of global annual CO2 emissions.

The ASA fully upheld Friends of the Earth Europe’s complaints and condemned the statements for implying universal acceptance that palm oil is being sustainably produced. The watchdog ruled that the Malaysian Palm Oil Council had not provided the necessary evidence to back up such statements.

The ASA also concluded that the adverts were misleading, “because there was not a consensus that there was a net benefit to the environment from Malaysia’s palm oil plantations” and said that this advert should not be broadcast again.

Corporate Accountability campaigner for Friends of the Earth Europe Paul de Clerck said: “It is a complete lie to advertise palm oil as sustainably produced – it has devastating impacts on the environment and local communities. The UK advertising watchdog is the latest of many bodies to question palm oil’s sustainability and the European Union must take note and rethink its plans to import vast amounts of palm oil for use as a biofuel.”

European Heads of State agreed in March 2007 that by 2020, ten percent of transport fuels in Europe should consist of plant-based agrofuels like palm oil. In addition, palm oil is being imported to fuel power stations in the EU.

To meet growing international demand for palm oil, Indonesia and Malaysia plan to double their oil palm plantations area to 18-22 million hectares, an area more then five times the size of the Netherlands.

A recent study by Friends of the Earth showed that there are grave environmental and social problems on palm oil plantations. [2]

The UK Advertising Standards Authority’s response can be found from today January 9 at: http://www.asa.org.uk/asa/adjudications/public/

[2] The study is available online at http://www.foeeurope.org/press/2007/July3_PDC_Wilmar_PalmOil.htm