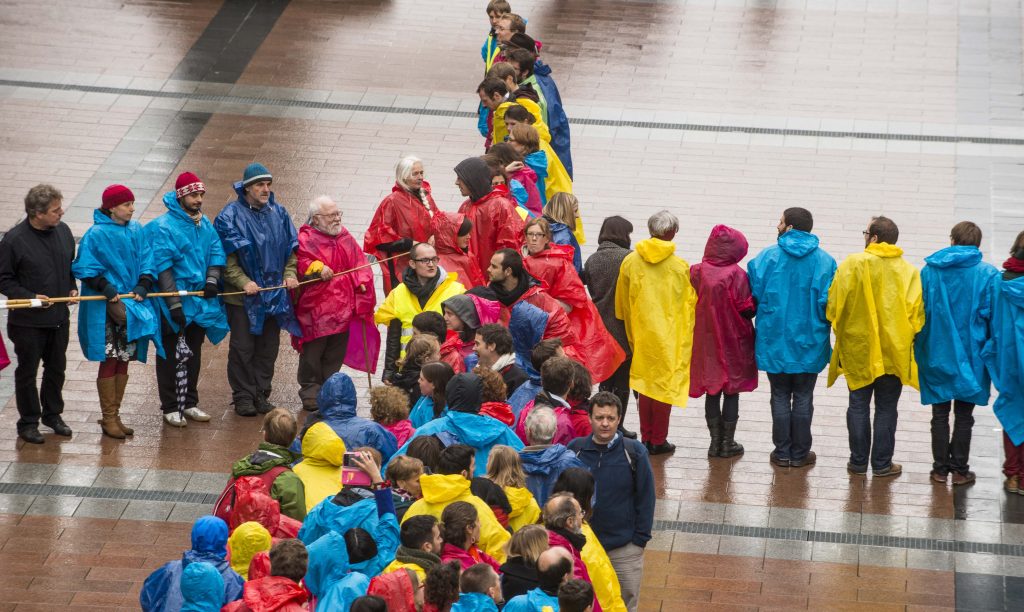 More than 150 people formed the shape of a giant wind turbine in front of the European Parliament in Brussels today to call for more support for community renewable energy projects.

The colourful ‘People’s windmill’ event aimed to send a message that citizen and community-controlled renewables should be at the centre of Europe’s energy policy.

Europe’s approach to energy for the next 20 years and beyond is currently being discussed by the European Union. Upcoming decisions on targets for greenhouse gas emissions, renewables and energy efficiency for 2030 will determine and shape Europe’s success in ending its dependence on polluting fossil fuels and combating climate change.

On Monday (November 11) international climate talks begin in Warsaw, Poland and represent another opportunity for EU politicians to move away from the current dirty energy system which favours the interests of big multinational energy corporations and towards a new, decentralised clean energy system open for all.

Magda Stoczkiewicz, director of Friends of the Earth Europe said: “Across Europe people are taking power into their own hands and getting involved in producing the energy they need. Our ‘People’s windmill’ event today shows that community energy is the answer to the energy and climate crisis, but governments must get behind it. The EU must show clear support for a renewables-based future by setting a high and binding target for renewable energy for 2030.”

Community energy projects exist in many forms right across Europe – from solar villages in Spain, to co-operative wind farms in Belgium, and community energy saving schemes in the Czech Republic – but they need more political attention and backing to fulfil their potential.

Dirk Vansintjan, board member of Ecopower and president of REScoop.eu, said: “Renewable Energy Sources Cooperatives (REScoops) are thriving in Belgium and are proof that a different model of energy production that puts citizens at the centre is possible. Europe needs more community energy projects like ours to shift from fossil and nuclear to renewable sources.”

“Everyone can have a role in the new energy system and local authorities can facilitate this. We can involve our citizens in decision making and financing of renewable energy projects, thus helping create a more decentralised energy system”, said Joachim Lorenz, permanent councillor for the city of Munich.

The success of multiple cities in lowering emissions has proven that local action is the most effective way to tackle the global climate challenge. A bottom-up approach allows cities access to financing mechanisms to enable innovative climate action. Over 50 mayors from 30 countries recently signed a declaration urging national governments to commit to such an approach and to ambitious and binding climate targets. [1]

‘People’s windmill’ events are also taking place this week in Austria, Georgia, Spain and the UK.