Opposition mounts to ‘marriage made in hell’ Bayer-Monsanto mega-merger 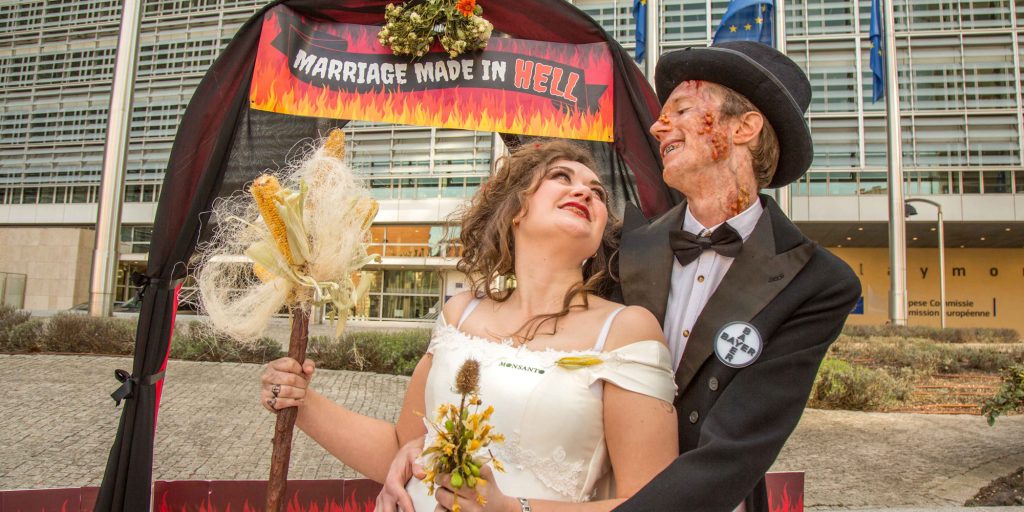 Friends of the Earth Europe staged a ‘marriage made in hell’ outside the European Commission headquarters in Brussels today to symbolise the threat to food and farming posed by the planned merger of the agriculture and chemical companies Bayer and Monsanto.

Environmentalists, farmers, farmworkers, beekeepers, and religious and international development groups are all opposed to the deal and are calling on EU authorities to block it. A letter signed by 200 organisations was delivered to European Competition Commissioner Margrethe Vestage on Monday.

Adrian Bebb of Friends of the Earth Europe said: “Europe’s food and farming system is broken and if giant firms, like Monsanto and Bayer, are allowed to merge they will have an even tighter toxic grip on our food. The mergers are a marriage made in hell and should be blocked by regulators. We need to build a fairer and greener food system out of corporate control.”

The Bayer-Monsanto deal is one in a series of mergers in the agriculture-chemicals sector being considered by the European Commission’s competition regulators. The Dow Chemical-DuPont deal has already been approved, and a Syngenta-ChemChina merger could be approved next week according to reports. Bayer is expected to officially start its acquisition of Monsanto in the very near future.

If they go ahead these mergers would lead to an unacceptable monopoly, with three companies controlling up to 70% of the world’s agro-chemicals and more than 60% of commercial seeds, says Friends of the Earth Europe.

A gruesome bride and groom made their vows in a hell-themed ceremony. Protestors interrupted the ceremony with placards saying ‘Hands off our food’ and ‘Break them Up’.

Bayer and Monsanto made the following vows to each other in the ceremony:

I, Monsanto, take you, Bayer, for my lawfully enriched husband. / I, Bayer, take you, Monsanto, for my lawfully enriched wife.
To have, and to hold more and more and more.
From this day forward, for richer and richer.
I promise to be true to you in good times for agribusiness – and in bad times for nature.
In public sickness and in our healthy profits.
I will love GMOs and toxic pesticides, and honour our power, all the days of my life, until death us do part. I DO!