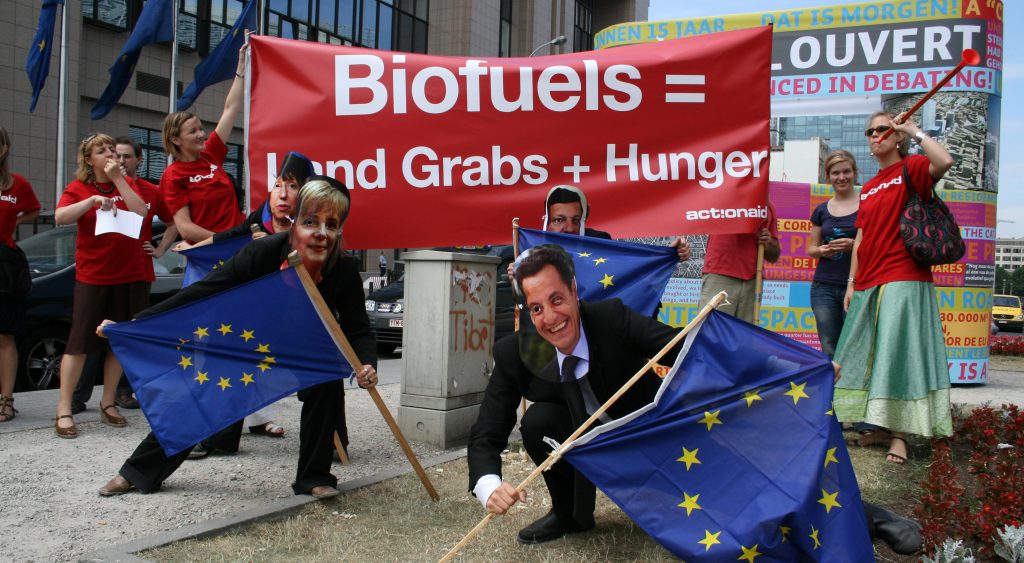 Buenos Aires (Argentina) / Brussels (Belgium), April 22, 2008 – Attempts to use certification schemes to reduce the widespread environmental and social problems caused by growing crops for fuels and animal feeds are bound to fail, states a new report released today by Friends of the Earth groups. [1]

The report is released on the eve of a controversial April 23-24 meeting in Buenos Aires set to discuss the certification of growing soy, a crop expanding rapidly to meet the increasing demand for fuel and the world’s most-used animal feed.

The report from Friends of the Earth groups comes amid global worries about the increasingly tragic impacts of rising food prices. Biofuels – plants grown to make fuel not food – have been blamed as one factor driving this trend.

Where they are grown in intensive agricultural systems, such as environmentally-damaging large-scale monoculture plantations, biofuels are called agrofuels. Their spread is creating even more pressure on land and further exacerbates existing problems. [2]

“The expansion of massive monocultures leads to the destruction of our forests, savannahs and wildlife, raises land and food prices and directly impacts on rural communities who are forced off their land to make way for the plantations. Unfortunately certifying large monocultures as sustainable would mislead international consumers and not improve production methods. Increasing production for export, and increasing consumption in the North, are destructive trends that must be reversed,” said Lucia Ortiz of Friends of the Earth Brazil.

“Whilst we feed cars and factory farms with cheap crops from the South, food prices rocket, forests are destroyed and people suffer. Certifying these crops as green, even if well intentioned, is a smokescreen that will fool the public and let the problems continue. The really green answer is to reduce the demand for these crops in the first place,” said Adrian Bebb of Friends of the Earth Europe.

The report investigates all the major certification schemes being introduced to minimise the environmental and social problems from growing soy and sugar cane in Latin America and concludes that:

* the rapid expansion of soy and sugar cane plantations pushes out other farming elsewhere causing deforestation, loss of wildlife and huge social problems, including violent conflicts and forced land evictions. All certification schemes fail to solve this major problem.

* knock-on effects such as rising food prices fall outside of all proposed certification schemes.

* it is highly unlikely that any of the certification schemes will be fully implemented and effectively monitored, thereby introducing considerable risk that schemes will be open to fraud and consumers will be deceived.

* many certification schemes are heavily dominated by large international companies that make their business from selling more and more commodity crops and have little interest in reducing the demand. This has led to widespread rejection from civil society groups in Latin America.

* genetically modified crops are accepted in some schemes as ‘responsible’ or as a mark of sustainability even where their use has led to a massive increase in chemical herbicides, environmental degradation and health problems for rural communities.

Friends of the Earth International also released a separate statement coinciding with the Buenos Aires meeting of the so-called Roundtable on Responsible Soy due to take place on April 23-24 in Buenos Aires. The Roundtable was widely criticised in the statement. [3]

“The companies involved in the Roundtable on Responsible Soy are in a unique position: they control both demand and supply of cheap soy for feed and fuel. But the only solution to the massive problems caused by industrial soy production is to decrease soy production and consumption, which is exactly the opposite of what the companies involved aim at,” said Roque Pedace from Friends of the Earth Argentina.

Recent studies including a Friends of the Earth report show that there are also grave environmental and social problems with palm oil, which is widely used in food, feed and agrofuels. The bulk of its production originates in unsustainable oil palm plantations in Malaysia and Indonesia. [4]

[2] Friends of the Earth International believes that agrofuels are a false solution to the current energy and climate crisis and campaigns against their development, production and trade. More information here.

[4] The Friends of the Earth Netherlands study on palm oil in Indonesia is available online here.