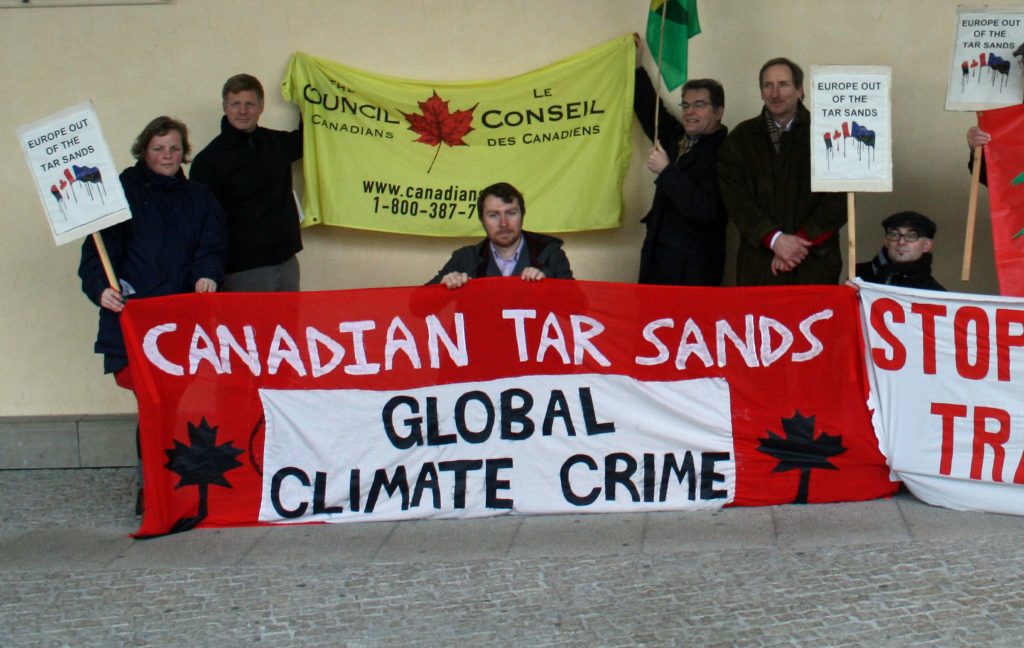 The first shipment of highly polluting Canadian tar sands oil to Europe is due to arrive in Spain today. Environment groups Friends of the Earth Europe, Transport & Environment and Greenpeace warn that this delivery provides a snapshot of Europe’s energy future – a continued addiction to ever-dirtier oil

The 600,000 barrels of oil will arrive in Bilbao and have been purchased by Spain-based multinational Repsol [1]. It is the first major shipment of tar sands oil to the EU.

Tar sands oil is one of the dirtiest fossil fuels in commercial production today and produces three to five times more climate changing emissions than conventional crude oil. Described as “the biggest carbon bomb on the planet” by leading climate change scientist James Hansen the extraction of tar sands causes pollution and deforestation, kills wildlife and threatens indigenous Canadian communities. Tar sands are currently only exploited on a large scale in Canada.

The environmental groups declared the arrival of the tanker an indictment of the European Union’s climate action and called for urgent action to keep tar sands out of Europe.

“Tar sands are deadly for our climate and must be kept in the ground and out of Europe. To give a lifeline to this dangerous industry is to set us up for climate disaster,” said Colin Roche of Friends of the Earth Europe.

In 2009 the European Union agreed to reduce emissions from transport fuels through a law known as the Fuel Quality Directive. This directive was due to enter into force in 2010. Due to the European Commission’s inaction, it still hasn’t been implemented [2]. The Canadian government has undertaken an aggressive lobbying effort to stop the law.

“The landing of massive amounts of dirty tar sands to our shores runs counter to Europe’s stated aspirations to decarbonise transport and curtail its addiction to oil. European drivers will be forced to fill up their tanks with tar sands that will raise emissions – not lower them – and push up the costs of decarbonisation by billions of euros,” added Laura Buffet of Transport & Environment.

A report by the US-based Natural Resource Defense Council shows that tar sands imports could skyrocket from about 4,000 barrels per day (bpd) in 2012 to over 700,000 bpd in 2020 as a result of pipelines that are planned or under construction in the US and Canada. These imports would undermine the Fuel Quality Directive’s aim to reduce fuels emissions by 6%. [3]

“This shipment could open the door to more imports of dirty tar sands. Europe can’t be both a climate champion and a market for climate-wrecking tar sands. The EU must uphold its environmental credentials and stand up to the intense lobbying by the oil industry and the Canadian government,” said Franziska Achterberg of Greenpeace.

Friends of the Earth Europe, Transport & Environment and Greenpeace are calling on the European Commission to finally implement a strong Fuel Quality Directive to keep the most polluting fuels out of Europe.

[1] http://www.reuters.com/article/2011/08/29/idUS257590805720110829 [2] In October 2011, the European Commission published a proposal to implement the FQD. In February 2012, Member States voted, but the proposal was neither approved nor rejected. This means the Commission now has to submit its proposal to the Council of Ministers. The Commission finalised an impact assessment study in 2013 but the proposal is yet to be released.  [3] www.greenpeace.org/eu-unit/en/News/2014/Flood-of-tar-sands-imports-equivalent-to-adding-6-million-cars-to-Europes-roads–study/