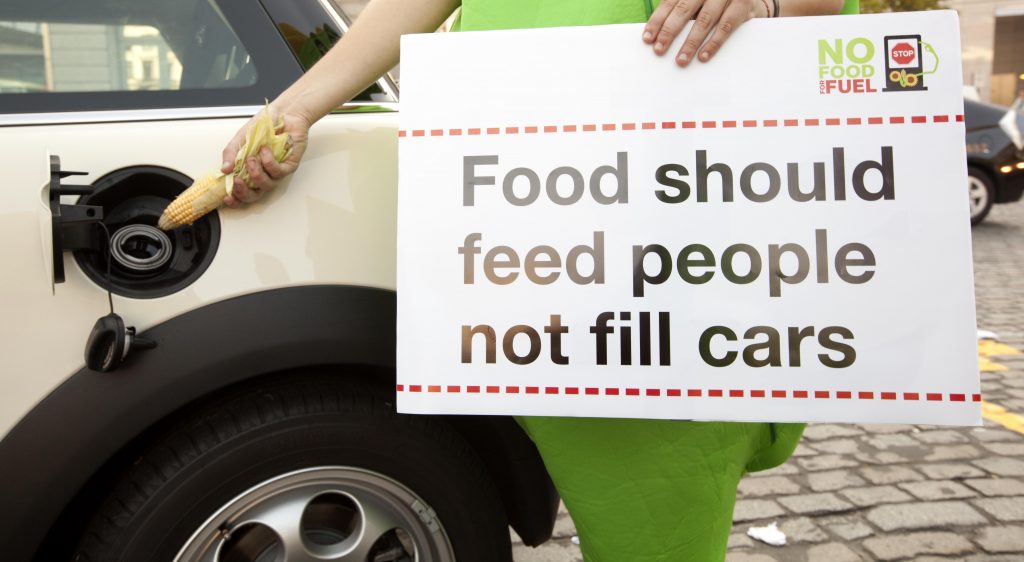 Europe’s drivers are being forced to fill their tanks with increasing amounts of rainforest-destroying palm oil, with reliance on the controversial biofuel set to rise even further, new figures released today show. According to the data, palm oil use has increased much more than predicted and is now at 20% of the biodiesel mix.

The new analysis [1] comes days [2] before a crucial vote in the European Parliament on the EU’s contentious biofuels policy. MEPs are under pressure to limit the use of biofuels which are contributing to climate change, deforestation and rising food prices.

Robbie Blake, biofuels campaigner for Friends of the Earth Europe, said: “Palm oil is driving mass deforestation, wildlife loss, community conflicts, and accelerating climate change. It is alarming to find that palm oil use in European cars is sky-rocketing, and will only increase further, unless MEPs put a halt to increasing biofuels. Drivers are unknowingly being forced to fill up with a fuel that is destroying rainforests, communities and the climate.”

The new figures show that European citizens are driving with much higher quantities of damaging palm oil than previously thought – Europe has increased the palm oil used in car fuel by 365% over the past six years. Although most of the palm oil used in Europe is for food and cosmetics, 80% of the increase has been driven by biodiesel demand.

The increase comes despite repeated warnings about the unsustainability of using more palm oil.

Biodiesel made from oil palm is considered the most damaging biofuel on the European market. It is linked to rapid deforestation in South East Asia which is causing climate changing carbon emissions, forest fires and smog across the region. Palm oil plantations have also been associated with allegations of labour abuse and child labour, and hundreds of cases of land conflicts between communities and palm oil companies. [3]

When consumers drive with palm oil biodiesel, the carbon footprint is thought worse than using normal diesel, mainly due to its indirect land use change (ILUC) impact. [4]

Nur Hidayati, head of campaigns for WALHI/Friends of the Earth Indonesia, said: “Civil society organisations in southern countries have watched the development of Europe’s biofuels policy with anxiety. This enormous increase in palm oil demand in Europe is escalating deforestation, land grabbing, and conflicts in Indonesia. Biofuels demand must be capped and reduced otherwise Europe will only intensify the problems for Indonesian people affected by palm oil expansion.”

Unless MEPs vote to limit demand for biofuels, EU reliance on palm oil will keep increasing to fulfil targets for 2020. [5] According to the findings, the production of biodiesel from European crops is levelling-off, whilst palm oil use in biodiesel is expected to increase by a further 40%.

[1] THE EU BIOFUEL POLICY AND PALM OIL: CUTTING SUBSIDIES OR CUTTING RAINFOREST? International Institute for Sustainable Development (IISD), for Friends of the Earth Europe.
See below for ‘Key findings’ [2] Vote in European Parliament plenary on EU biofuels policy expected 11 September in Strasbourg. European Parliament plenary debate on biofuels will take place on Monday 9 September in Strasbourg, France. [3] ADDRESSING THE IMPACTS OF THE EU’S AGROFUELS POLICIES ON INDONESIA. 2013 Briefing paper by Down To Earth, 11.11.11, Friends of the Earth Europe, Watch Indonesia, Sawit Watch, Walhi, Misereor.  [4] ‘Indirect Land Use Change’ (ILUC) happens when land  that  would  otherwise  be  used  to  feed  people  and  livestock  is used to satisfy  the   growing hunger for biofuels. New lands must be ploughed up elsewhere for food and feed, destroying vital ecosystems and carbon stores like forests and peat  land, a process that releases millions of tons of emissions and accelerates climate change. This reality undermines the environmental benefits that the EU biofuels policy promised. [5] An independent opinion poll in Germany last Monday (2 September 2013) found that 78% of German citizens want to be able to decide whether they fill up with biofuel or not, whilst 71% oppose financial and policy support for biofuels.  www.bund.net/nc/presse/pressemitteilungen/detail/artikel/forsa-mehrheit-der-deutschen-gegen-biosprit-foerderung-und-beimischungszwang-bund-fordert-von-eu-1/