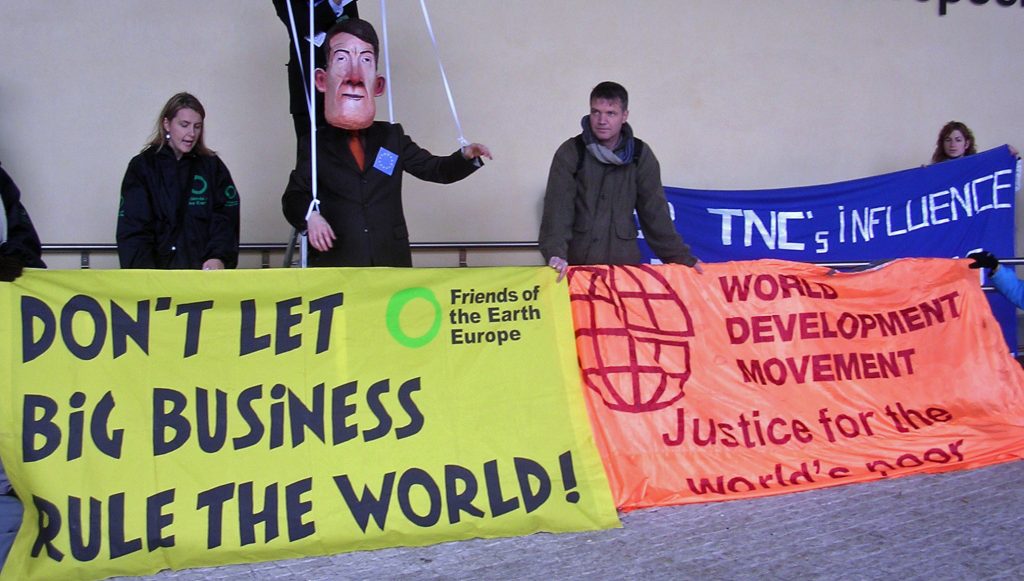 MADRID, SPAIN, 18 May 2010 – Friends of the Earth International today welcomed the ruling of the Permanent Peoples Tribunal, which condemned the European Union and European financial institutions for supporting criminal activities of European transnational corporations in Latin America [1], singling out Unión Fenosa, Stora Enso and Holcim. [2]

The ruling was issued on the eve of the VI Summit of Heads of States and Governments of the EU, Latin America and the Caribbean in Madrid, Spain. [3].

After two days of hearing testimonies from civil society organizations and indigenous communities directly impacted by the operations of European transnational corporations in Latin America, an international panel of judges urged the EU to establish a legal framework that allows holding corporations accountable for crimes in Latin America, stop the violations, repair their damages and grant victims access to justice.

It further asks the United Nations to establish an obligatory code of conduct for transnational corporations and to expand the mandate of the International Criminal Court of Justice from natural to legal persons (corporations).

“We are pleased that the Tribunal challenges the EU’s promotion of policies that put corporate interests before peoples’ rights. Instead of discussing further association agreements that ensure more profits for companies, the EU, Latin American and Caribbean Heads of States should ensure that corporations do not violate fundamental human rights,” said Sebastián Valdomir, International Coordinator of the Economic Justice Program of Friends of the Earth International.

Friends of the Earth groups together with allies presented three cases against European companies to the Permanent Peoples’ Tribunal:

* The Spanish energy company Unión Fenosa was condemned for being responsible for the persecution and assassination of community leaders in Guatemala and Colombia, of violating labour rights and of depriving the poorest of essential services by raising prices, and cutting electricity supply in Guatemala, Mexico, Colombia and Nicaragua. The Tribunal also warned about the impacts of a coal mining mega-project planned by Unión Fenosa and Gas Natural in Guatemala and recommends its suspension.

* The Swedish-Finnish forestry corporation Stora Enso was condemned for being responsible for environmental destruction in Brazil and Uruguay. The Tribunal further condemned the negative impacts on resources such as water and biodiversity which are vital for the livelihoods of communities near the Stora Enso plantations

* The Swiss cement company Holcim was condemned for being responsible for cases of kidnapping in San Juan Sacatepequez (Guatemala) and assassination of community leaders, the criminalization of communities opposing the exploitation of their natural resources, and of environmental destruction and pollution in Guatemala, México and Colombia. The Permanent Peoples Tribunal also challenged the role of european financial institutions (such as the European Investment Bank) and development agencies which provide funds for destructive activities of transnational corporations and urged them to adopt mechanisms that guarantee the protection of human rights.

“The European Investment Bank claims to support sustainable development, but it gives huge sums to destructive projects such as Stora Enso’s eucalyptus monocultures in Brazil and Uruguay. Stora Enso now owns more land in Latin America than in Europe, and it is the biggest land-owner in Uruguay,” said Christine Pohl of Friends of the Earth Europe.

“The economic policies of the EU, its banks and development agencies promote growth and economic development to combat poverty, but in reality they have only benefited the rich elites while the poor suffer disastrous consequences,” added Christine Pohl.

[1] The Permanent Peoples Tribunal (PPT) was established in 1973 as the Russell Tribunal on Vietnam to address the institutional gaps in the international legal system. The authority of the Tribunal’s decisions is guaranteed by the integrity of the jury, which consists of judges, human rights lawyers, economists, political analysts, academics and human rights activists. [2] The Ruling is available here. [3] The full EU Latin American and Caribbean Summit takes place in Madrid today, 18 May 2010. The regional summits EU-Andean Community and EU-Central America take place tomorrow, 19 May. On 16-17 May regional summits with Mexico, Chile, Cariforum and Mercosur took place. More information about the EU-Latin American and Caribbean Summit is available at: http://ec.europa.eu/external_relations/lac/index_en.htm