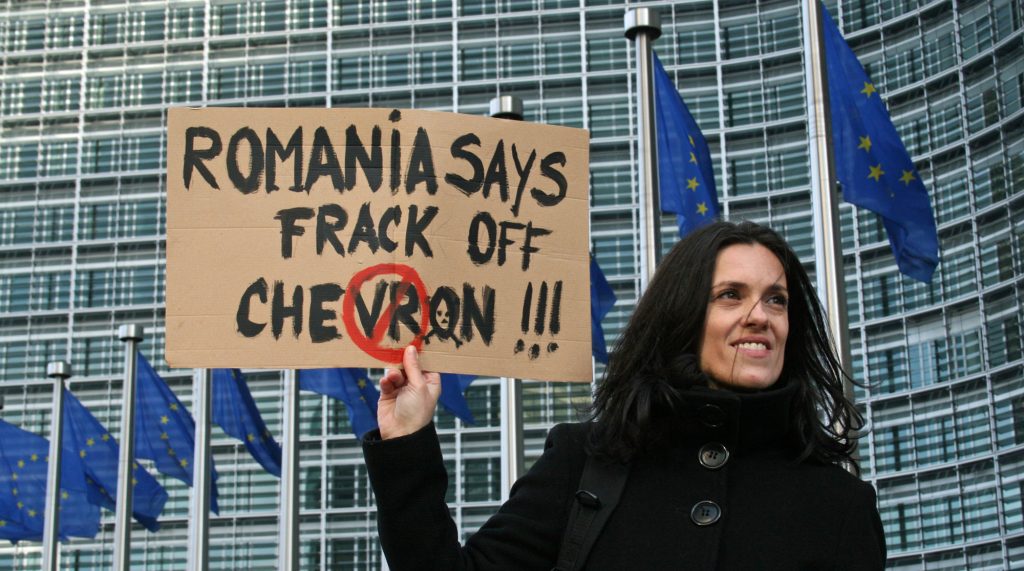 Europe is opening its doors to dirty and dangerous unconventional fossil fuels, Friends of the Earth Europe and Food & Water Europe said today. The warning comes as the European Commission publishes a framework to guide member states on how to regulate shale gas which fails to provide mandatory protection for Europe’s citizens against the environmental and health risks of fracking.

Despite the best efforts of some decision-makers, attempts to regulate the fracking industry have been undermined by heavy corporate lobbying and pressure from certain member states intent on fracking their lands. The proposal is now weak and will not stop the environment and communities being harmed, contradicting previous recommendations and studies made by the European Parliament and the European Commission [1].

Antoine Simon, shale gas campaigner for Friends of the Earth Europe said: “Shale gas regulations have been fracked to pieces by corporations and fossil fuel-fixated governments. Insufficient and non-binding recommendations and monitoring mean fracking will go ahead improperly regulated and local communities will be the ones who suffer. Europe is putting the fox in charge of the hen house.”

Europe can expect to see a surge in local resistance, like that witnessed in the UK, Romania and Poland: more than 370 grassroots organisations from all around Europe published last week a letter expressing strong concern about the promises not kept by the EU institutions to put in place a regulatory framework that would guarantee a so-called safe and sustainable development of this industry in Europe.

Geert de Cock, policy officer for Food & Water Europe said: “The Commission proposals on unconventional fossil fuels fail to deliver the robust rules that the Commission’s own impact assessment, the Parliament, opinion polls and the International Energy Agency have called for. The lack of courage by EU leaders to stand up to industry pressure will galvanize our campaign for a complete ban on fracking.”

With the heavy support from José Manuel Barroso, the United Kingdom, Poland, and Romania have all played a leading role in undermining shale gas legislation, with allies Hungary, Lithuania, Czech Republic and Slovakia, according to a letter written by the UK Permanent Representation and obtained by Friends of the Earth.

Antoine Simon continued: “Past experience, every poll, study and resolution, pointed to the need for tough regulation. Instead, we’re repeating the social and environmental mistakes played out across America. The village of Pungeşti, Romania offers a grim example of the future of shale gas development in Europe – with communities themselves the last line of defence against dirty and dangerous fossil fuels.”

Next month, MEPs will make a final vote on changes to environmental and health safeguards applicable to all fossil fuels, in the form of a review of the Environmental Impact Assessment directive. Fracking remains exempt from mandatory impact assessments after being removed from the text by the European Council. Environmental impact assessments for shale gas projects will only be undertaken voluntarily by member states and some countries have already announced they would not make use of them.

Friends of the Earth Europe and Food & Water Europe campaign against the extraction of unconventional fossil fuels, including shale gas. The extraction of unconventional gas and oil poses a significant threat to the climate, the environment and to local communities. They will lock Europe into fossil fuel use, jeopardise emissions reduction targets and prevent investments in genuine solutions – like the development of community renewable energy resources, and energy savings projects.

Today the European Commission also unveils its plans to tackle climate change by the year 2030. The proposal disregards climate science and fails to set the ambitious binding targets necessary to avoid catastrophic levels of global warming.

Activists from Friends of the Earth Europe, Food and Water Europe, HEAL and SOS Rosia Montana Brussels gathered outside the European Commission today to stand in solidarity with communities resisting fracking across Europe.

[1] A series of European Parliament and Commission studies can be found at the links below: