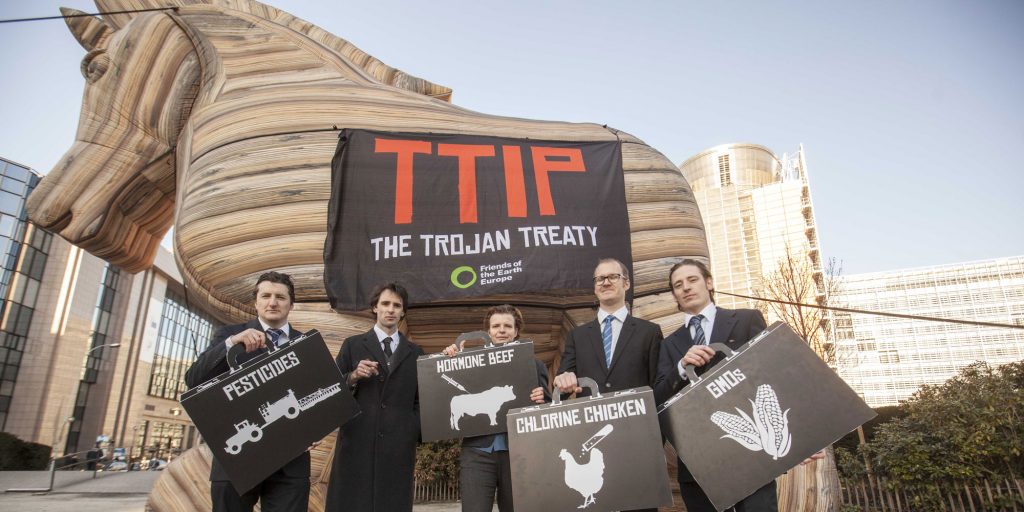 The trade agreement being negotiated between the US and EU threatens public health, consumer rights and animal welfare standards, shows new analysis today by food and trade experts. The criticisms come as negotiators from both sides of the Atlantic meet behind closed doors in Brussels, Belgium this week to start writing new food safety rules for the trade deal and as hundreds of people demonstrated against the ‘Trojan Horse Treaty’.

A document about the deal recently published by the EU shows that officials are planning a major ‘power grab’ to put trade interests before food safety concerns as part of the planned Transatlantic Trade and Investment Partnership (TTIP).
The analysis shows that the EU proposals would reduce the possibility of restricting genetically modified foods and the use of hormones and other chemicals in factory-farmed animals by establishing a new transatlantic body to filter all future food safety and animal welfare rules – aiming to facilitate trade “to the greatest extent possible”.

First decisions on food safety would be shifted to this new trade committee and away from national and European decision-makers, while also reducing countries’ rights to inspect food and agricultural imports at the port of entry – a key measure used to safeguard public health.

These moves would expose the public to more food scandals and pollution by making the EU and US increasingly accept international food safety standards – which are generally accepted as weaker. They would also undermine local or regional powers to set higher standards, such as banning GM crops or restricting antibiotic use in factory farming.

“The TTIP will lead to the long term decline of safety standards, opening the door to increased trade in industrially-produced foods and lining the pockets of the corporations that control them. This means more GM foods, pollution and factory farms, as well as less choice for citizens.”

Friends of the Earth Europe is calling for the TTIP to be stopped and efforts put into strengthening local sustainable food economies that benefit citizens and the environment and boost local economies.

Today hundreds of people took part in a demonstration in Brussels calling for an end to the ‘Trojan horse treaty’. Organised by Friends of the Earth Europe and Global Justice Now, the protest featured an 8 metre high Trojan horse and about 100 people from the UK and from different walks of life who travelled together to protest against the negotiations and to discuss their different concerns over TTIP with their MEPs.

Guy Taylor, trade campaigner with Global Justice Now, co-organisers of the demonstration, said: “TTIP has rapidly become the most controversial and unpopular measure that the European Commission has ever attempted to introduce. Well over a million people across Europe have signed a petition calling for it to be scrapped, and the Commission’s own public consultation returned record numbers of an overwhelmingly negative verdict on the trade deal. It has become clear that these talks are only going ahead on the mandate of the tiny corporate elite that would benefit enormously from privatising public services and scrapping vital environmental and labour protections.”

Friends of the Earth Europe and Global Justice Now are among more than 100 organisations which have signed a statement today against plans to create more compatible rules between the EU and the US on chemicals, food, public services, workplace health and safety, and financial regulation as part of EU-US trade talks.