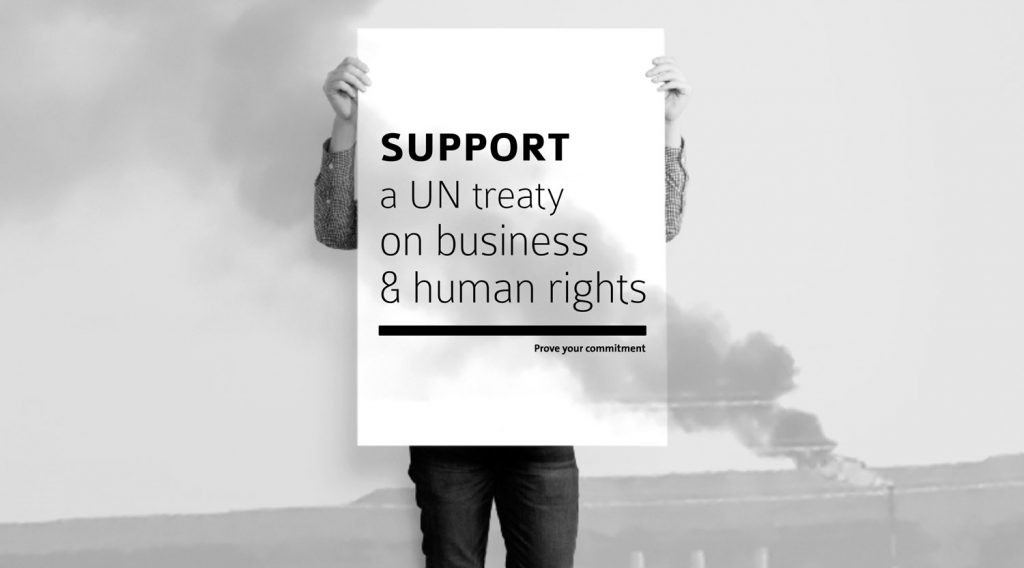 Before the end of this week 193 nations meeting at the United Nations Human Rights Council (UNHRC) will decide the fate of a proposal to develop international rules to stop human rights abuses by multinational companies and bring them to justice.

The EU is trying to sabotage the proposal, which has received initial support by more than 80 nations and over 500 organisations, including Friends of the Earth Europe, which believes that binding rules are urgently needed to protect human rights and environmental rights defenders. [1]

The EU has taken a very obstructive approach at the UNHRC by openly stating that, if the proposal gets adopted, the EU will refuse to cooperate. Thus the EU not only actively undermined the UN democratic process, isolating itself, but also in essence said it would refuse to support real action against human rights violations by companies, according to Friends of the Earth International.

The proposal on a binding treaty on businesses and human rights was tabled at the UNHRC by Ecuador and South Africa. The strongest opponents so far are the US, Norway and the EU, who are not only fiercely and strongly opposing the proposal, but also actively bullying other countries to side with them, threatening them with loss of development aid and waving the ghosts of diminishing Foreign Direct Investment, according to Friends of the Earth International.

Paul de Clerck of Friends of the Earth Europe, said: “The EU is not only trying to block a proposal to develop rules to stop human rights violations by companies, it also threatens not to cooperate if the proposal is adopted. It is unacceptable that the EU and its member states take side with corporate criminals instead of the victims of corporate abuses.”

Lucia Ortiz of Friends of the Earth International said: “The EU’s extremely uncooperative approach shows that it is currently standing up for corporate interests instead of human rights. We call on the EU as well as on the other countries blocking the proposal to stop their opposition and start working on strong international measures to protect citizens from human rights abuses by corporations.”

A week of mobilisation to ‘Stop Corporate Crime and Impunity’ kicked off on June 23 in Geneva with a special session of the Permanent Peoples Tribunal (PPT).

The PPT held a trial against the companies Shell, Mekorot, Hidralia, Glencore Xtrata, Coca-Cola, Chevron, Lonmin and Pacific Rim for their human right abuses and increasing criminalization and violence against human rights and environmental defenders.