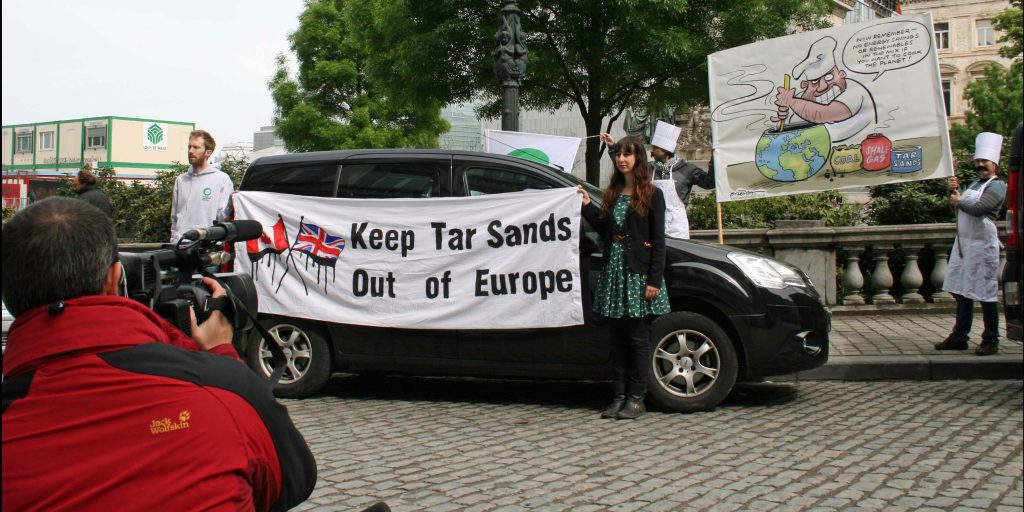 Friends of the Earth Europe has criticised a proposal announced today to regulate fuel imports to Europe because it does nothing to penalise the most polluting fuels.

The European Commission today published plans to implement the ‘Fuel Quality Directive’ – a crucial piece of European climate legislation agreed five years ago which aims to reduce emissions from transport fuels. It sets a target to reduce the greenhouse gas emissions of transport fuels by 6% by 2020.

Under strong pressure from the oil industry and the Canadian and US governments, the Commission has dismantled an earlier proposal to make it less attractive to import oil from tar sands into Europe. Even though today’s measures recognise the high emissions of some fuels, especially tar sands, the implementing proposal does not set out any measures to discourage their import.

“The Commission has recognised the highly polluting nature of tar sands but is going to let this climate killer be used by European oil companies with no penalty at all. The Commission has clearly seen the problem but – under heavy pressure from the oil industry and the Canadian and US government – chosen not to act on it,” said Colin Roche, extractives campaigner with Friends of the Earth Europe.

Tar sands oil, which mainly comes from Canada, is the most harmful fuel in large scale commercial production today, responsible for three to five times more climate changing emissions than conventional fossil fuels. The first delivery of Canadian tar sands oil to Europe arrived in June this year. Today a shipment of Canadian heavy crude, likely to contain tar sands, is due to arrive in Italy.

The latest proposals confirm that oil from tar sands is more dangerous for the climate. However fuel suppliers in the EU are not incentivised to use less tar sands derived fuel. Under the proposal tar sands derived oil is treated the same as conventional oil when companies report how they are meeting the emissions reduction target. This is despite a projected influx of tar sands equivalent to adding an extra six million cars to Europe’s roads by 2020. This set of plans is a radical departure to a previous proposal in 2011 which would have pushed suppliers to use less oil from tar sands.

Since then the EU has begun negotiations on trade agreements with Canada and the United States. Pushed by the oil industry, both countries have used the trade negotiations to pressure Europe into ignoring the climate effects of tar sands fuel.

“Clearly the Commission has sold out Europe’s climate policy by putting the trade talks ahead of the protection of the planet. With just over a year to go before crucial climate talks in Paris the EU should be acting decisively on climate change, not watering down its own policies in the face of the fossil fuel industry lobby,”[1] continued Mr. Roche.

The new proposals come after the Commission has proposed not to take forward the Fuel Quality Directive after 2020 even though transport is set to be the largest source of greenhouse gas emissions in the Union by 2030.

Friends of the Earth Europe calls on national governments to address the blind spot of tar sands in EU climate policy , and ensure measures to decarbonise transport are included in its ‘2030 package’ of plans to tackle climate change.

[1] This lobbying activity includes meetings between the European Commissioner for Trade, Karel de Gucht, and ExxonMobil in advance of negotiations to conclude the FQD implementation measures. In February of this year Friends of the Earth Europe was refused access to documents exchanged between ExxonMobil and the European Commission, as well as the names of the lobbyists themselves, relating to the FQD.

On October 3, four days before the publication of these proposals, ExxonMobil began work to upgrade its oil refinery in Antwerp, Belgium to refine tar sands oil.