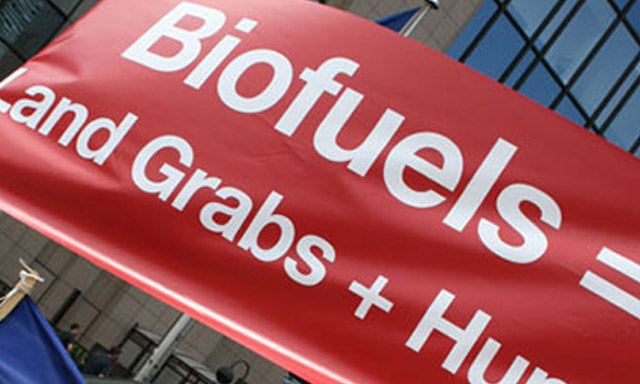 Development and environmental groups today warned that EU biofuels targets are leading to uncontrollable land grabbing from poor communities in Africa, pushing more people into hunger [1]. On the day before EU Member States submit their renewable energy plans to the EU, ActionAid and Friends of the Earth Europe called on European leaders to halt the expansion of biofuels.

Activists representing biofuels bandits Barroso, Ashton, Sarkozy and Merkel grabbed land outside the European Commission, highlighting the land grabs in developing countries that are taking place at an ever-increasing rate to feed the EU’s quest to meet its energy needs.

Friends of the Earth Europe and ActionAid activists, dressed as Heads of State, grabbing land for biofuels outside the European Council

EU member states will tomorrow submit their plans to meet the EU’s Renewable Energy Directive, which demands that 10% of transport fuel comes from renewable energy by 2020 – most of it likely to come from biofuels [2]. Already, EU companies have acquired or requested 5 million hectares of land in developing countries for industrial biofuels – an area greater than the size of Denmark [3]. Often this is land used by poor communities to feed themselves. To meet the 10% target could require up to 17.5 million hectares [4].

“EU countries are only thinking about filling their fuel tanks yet over a billion people around the world cannot find enough food to fill their stomachs”, said David Barisa Ringa from ActionAid Kenya.

“Poor communities are being pushed off their land to make way for EU biofuels companies. Under the Treaty of Lisbon all EU policies must have the eradication of poverty as the primary focus – this is clearly not the case with the EU’s energy policy, which is further damaging EU progress towards the MDGs”.

Laura Sullivan, ActionAid’s European Policy and Campaigns Manager, added: “The Commission calculates that most of its renewable energy target – about 6-9% will come from biofuels. Yet an independent study released by the Commission shows that anything over 5.6% is likely to harm the environment. If biofuels are not environmentally sustainable and have major implications for global hunger, why is Europe moving to expand production?”

The EU Energy Commissioner recently said that Europe already imports around 25% of its biofuels, a figure that will only increase as biofuels use in the EU takes off. EU member states do not have the land to produce biofuels at home and are fuelling land grabs in countries where land is desperately needed to produce food.

Adrian Bebb, food and agriculture campaigner for Friends of the Earth Europe said: “Huge tracts of land are being snatched across the developing world for European biofuels. Whether it’s their impact on the environment, the climate, or the need to swallow up more land, the arguments against large scale biofuels continue to grow. Only a reversal of the EU biofuel targets and urgent investment to promote environmentally friendly farming and efficiency in our transport can stop this trend”.