Danger of flood of tar sands imports to Europe 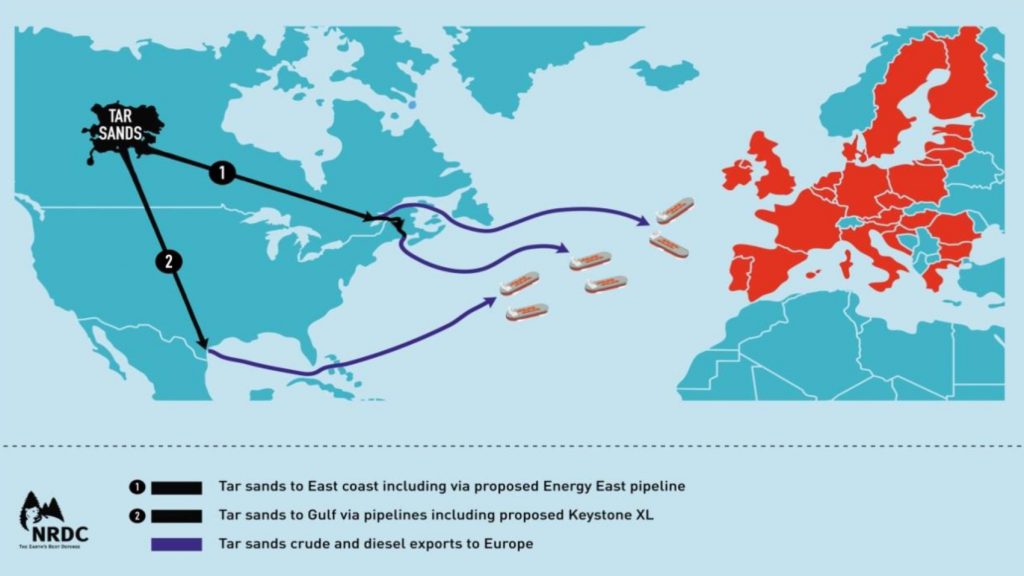 New figures released today by the US Natural Resources Defense Council (NRDC) show that if Europe does not act, its imports of tar sands, one of the dirtiest fossil fuels, would likely skyrocket from about 4,000 barrels per day (bpd) in 2012 to over 700,000 bpd in 2020 [1]. The resulting emissions increase in transport would be the equivalent of adding six million cars to Europe’s roads. The 2020 scenario will occur if the EU clean fuel standard, set out in the Fuel Quality Directive, is not comprehensively implemented.

Colin Roche, extractives campaigner for Friends of the Earth Europe said: “Trying to reduce the carbon-emissions from our fuels by importing more of the most carbon-intensive fossil fuel in commercial production makes no sense. We need to keep tar sands out of Europe. President Barroso should stop giving in to the oil industry and fully implement the Fuel Quality Directive now.”

The Fuel Quality Directive (FQD) is an EU law that aims to lower emissions from Europe’s transport fuel by 6% by 2020. Five years after its adoption in 2009, detailed rules for accurate carbon labelling of petrol and diesel fuels, as well as reporting obligations for individual oil companies, have yet to be decided [2].

As part of its climate and energy package announcement on Wednesday 22 January, the European Commission included a line of text saying that it does not think it appropriate to “establish new targets for […] greenhouse gas intensity of fuels used in the transport sector” after 2020. This decision has not been backed up by any analysis and fails to take into account the potential flood of tar sands into Europe as well as the resulting emissions increase. 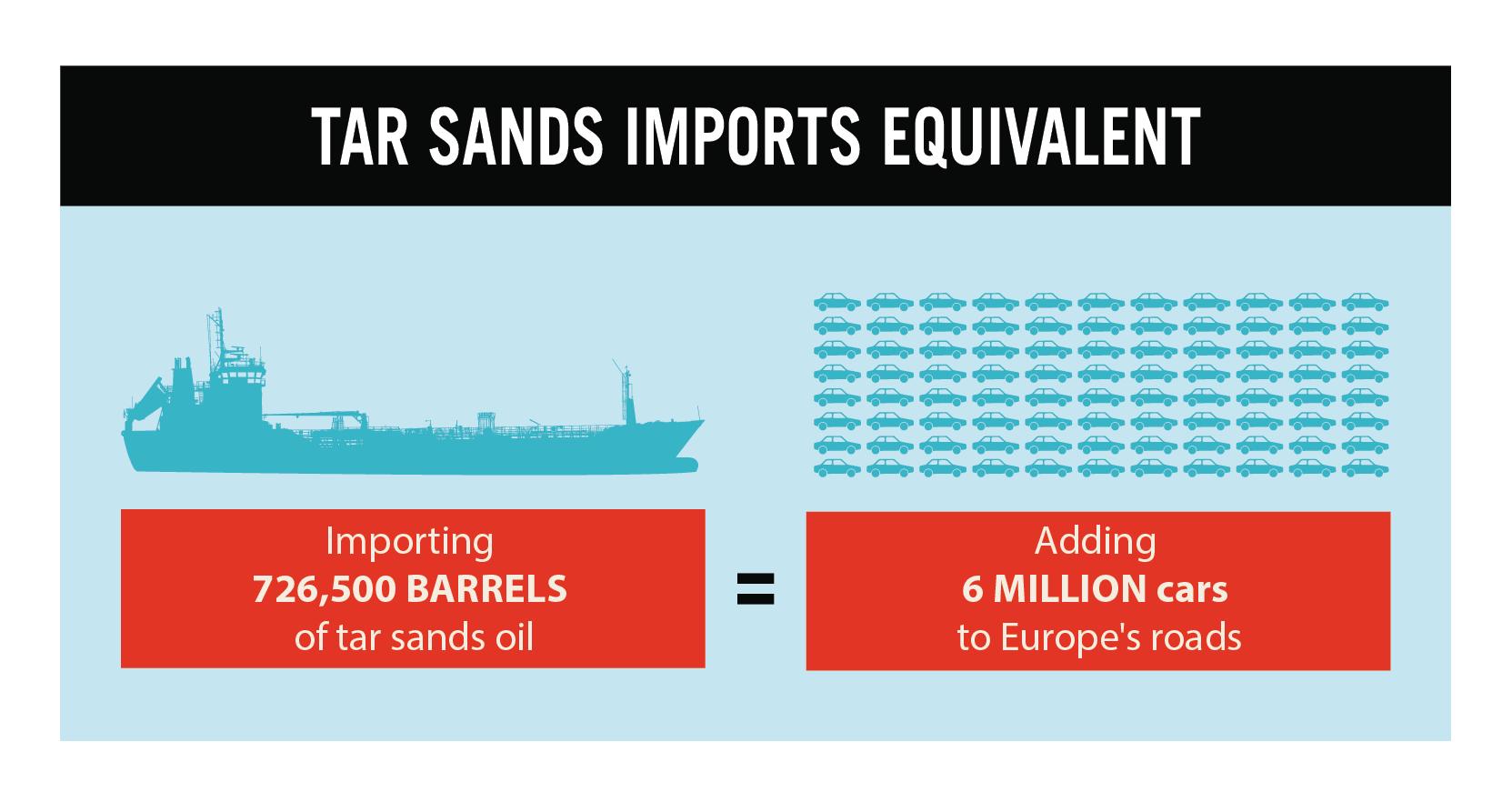 Franziska Achterberg, Greenpeace EU transport policy director, said: “Canada’s politicians and their best friends from Shell and BP are desperate to open up new markets for their polluting oil. They have used all the tricks in the book for Europe to ignore its own environmental standards. If Europe fails to stand by its laws, it will allow a flood of tar sands to wreck its carbon footprint.”

If full implementation of the FQD does not go ahead and large volumes of tar sands flood into Europe, the study concludes that the FQD’s decarbonisation target will be much more difficult to achieve. The higher imports of tar sands, as a result of new pipelines in the US and Canada, would increase the average carbon intensity of Europe’s fuels by 1.5% in 2020, undermining the targeted 6% decrease.

With tar sands in the fuel mix, achieving the additional emission reductions will cost more money. Fuel suppliers will likely choose to supply more biofuels produced from food crops, which continue to be rated as low carbon under the EU’s flawed carbon accounting rules. This can drive up compliance costs by an estimated 4 billion euros per year and increase pressure on the environment and food production. These extra costs can be avoided by a robust implementation of the FQD, which would keep tar sands out of Europe.

Nusa Urbancic, clean fuels policy manager at Transport & Environment, said “Europe needs to decarbonise its transport fuels in the most efficient way possible. Allowing dirty tar sands to flood into Europe is going to raise emissions – not lower them – and raise the costs of decarbonisation by billions of euros. Europe needs to introduce company-specific reporting obligations for fuel suppliers so they can choose which fuels make up their supply and incentivise those with lower emissions.” 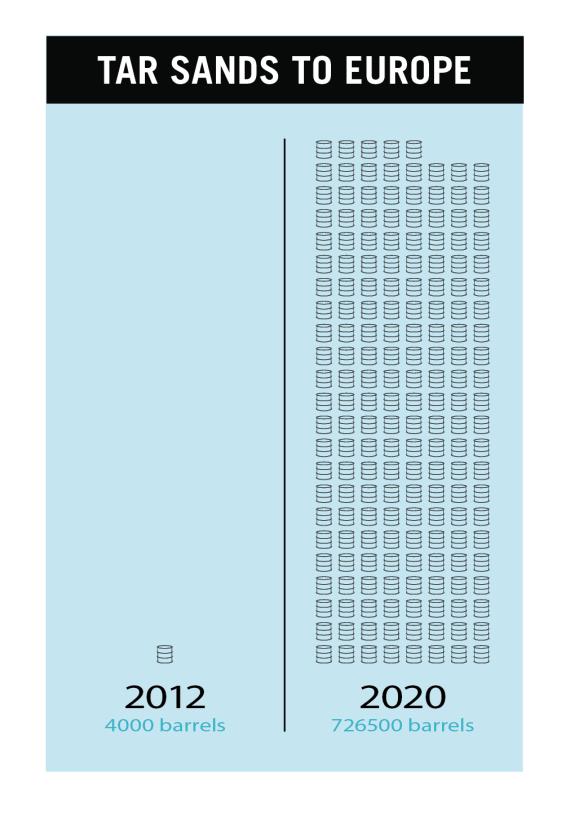 [1] ‘The tar sands threat to Europe’: briefing from Friends of the Earth Europe, Transport and Environment and Greenpeace, January 2014.

The new research by the Natural Resources Defense Council has been released by Transport and Environment, Greenpeace and Friends of the Earth Europe. It shows, that imports of Canadian tar sands are likely to be between 5.3% and 6.7% of the EU’s oil consumption by 2020, as a result of pipelines that are planned or under construction in the US and Canada. The European Commission’s impact assessment study had originally predicted tar sands imports from Canada to reach only 0.2% in 2020.