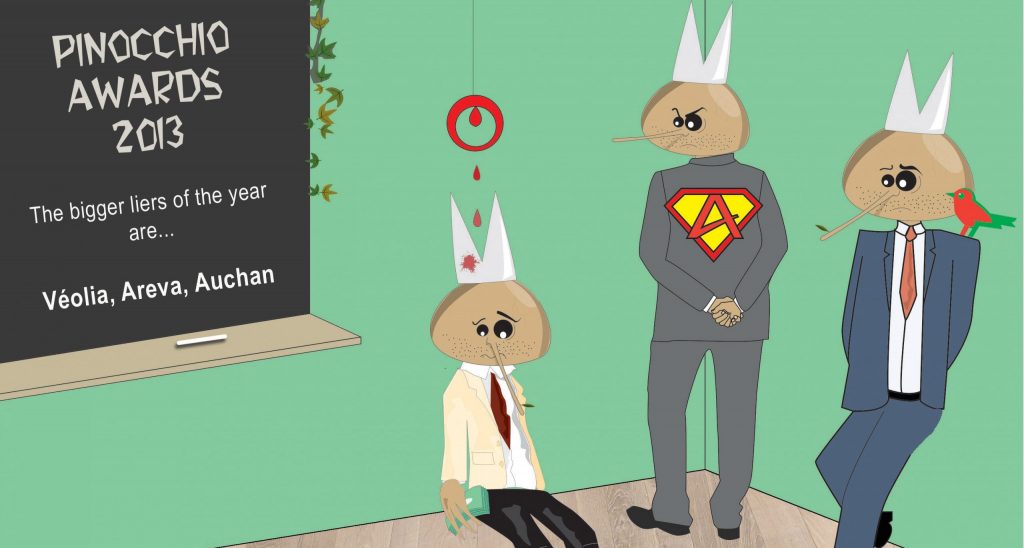 Les Amis de la Terre/Friends of the Earth France ended the suspense and announced the winners of the 2013 Pinocchio Awards at a ceremony in Paris last night.

More than 41000 people took part online – more than twice as many as previous years – and voted Veolia, Areva and Auchan the big winners of this year’s prizes. [1].

The water company Veolia received the Pinocchio Award in the category ‘One for all, all for me’ given to the company with the most aggressive policies on landgrabbing, or exploitation or destruction of natural resources.

Veolia is implicated in water privatization projects in India. It pretends to be a hero bringing water to the poor, whilst on the ground the reality is a lot different: price increases, delays, and conflicts with communities and local officials.

In the category ‘Greener than green’ [3], Areva won easily with 59% of the votes. This category was dedicated to companies which have led abusive and misleading communication campaigns when compared to their actual activities.

Areva – the nuclear multinational – won for daring to create a museum dedicated to the glory of uranium mining in the French region of Limousin and paying no attention to the dramatic social and environmental impacts uranium extraction mines have had there and continue to have all over the world.

Finally, with 50% of the votes, the Pinocchio Award in the category ‘Dirty hands, full wallet’ – for the company with the most opaque financial policy in terms of lobbying or in its supply chain [4] – went to Auchan.

The number two of large retailers in France, Auchun refuses to admit its responsibility and to contribute to the compensation fund for the victims of the Rana Plaza garment factory collapse, in Bangladesh. This despite labels of its clothes having been found in the ruins of the accident that killed 1133 people and left even more people wounded, mostly women.

Juliette Renaud, corporate accountability campaigner at Friends of the Earth France, commented: “This year, the Pinocchio Awards occur at a time when a draft law proposal on multinationals’ duty of care has just been introduced to the French National Assembly. We strongly hope that members of parliament and the government will now be able to resist the lobby pressure and that this law will be voted and implemented as soon as possible, paving the way for the recognition of multinationals’ legal responsibility on their subsidiaries and subcontractors.”

Fanny Gallois, campaigns coordinator at Peuples Solidaires, commented: “These awards are an opportunity to raise the voices of those that, all over the world, suffer the negative impacts of multinationals’ activities and fight for the respect of their rights. It is high time to act and stop multinationals from taking profit of impunity and refusing to assume their responsibility in respect to populations.”

Through the condemnation of bad and immoral practice, human rights violations and environmental damages, the Pinocchio Awards have grown every year since their creation in 2008, and are thus contributing to pressure on companies to make them change their practices.

This year’s awards were organised in partnership with Peuples Solidaires, ActionAid France and the Centre of Research and Information for Development.