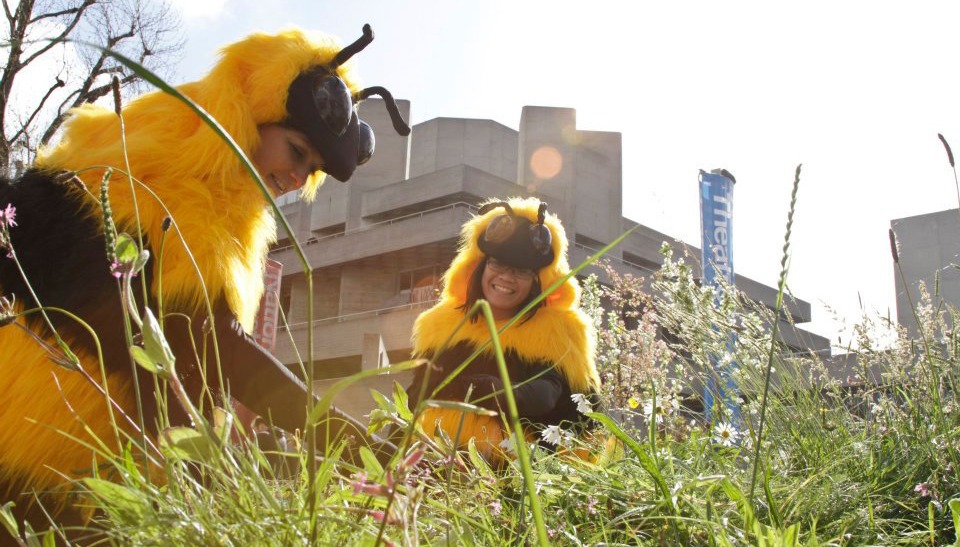 It would cost the UK £1.8 billion every year to hand-pollinate crops without bees – 20% more than previously thought – according to new research launched today by Friends of the Earth England, Wales and Northern Ireland as it unveils a new campaign to save the bee.

The new figure – equivalent to the annual wages of 60,000 teachers – comes from research conducted by leading bee experts at the University of Reading on behalf of the environment charity as it launches The Bee Cause to call for action on bees before it’s too late.

Friends of the Earth is also creating a temporary 150 square metre wildflower meadow in the shadow of the National Theatre, London, to highlight the need for more bee-friendly habitats – with the flowers used to create the spectacle given away to passers-by to encourage gardening that will help bees to thrive.

In recent years Britain has lost over half the honey bees kept in managed hives and wild honey bees are nearly extinct. Solitary bees are declining in more than half the areas they’ve been studied and some species of bumblebee have been lost altogether.

Costly hand-pollination is already being used in parts of the world, notably pear trees in Hanyuan County, China, where native bee populations have been wiped out by a combination of loss of their natural habitat and intensive farming.

Friends of the Earth is urging British Prime Minister, David Cameron, to save these important pollinators and save the nation billions by committing to a British bee action plan. The plan outlines action on the planning of our towns, the way we farm and use pesticides and funding for nature experts in the Government to ensure vital bee populations are restored.

The charity is also providing information and resources on how people can help bees in their gardens and communities, including giving away 20,000 packets of wildflower seeds.

To support the call to David Cameron and find out what else you can do to help bees, visit www.foe.co.uk/bees.

Paul de Zylva, nature campaigner at Friends of the Earth said: “Unless we halt the decline in British bees our farmers will have to rely on hand-pollination, sending food prices rocketing. Bees are responsible for most of our favourite fruit and vegetables so as well as the huge blow to our economy, our diet would also suffer.”