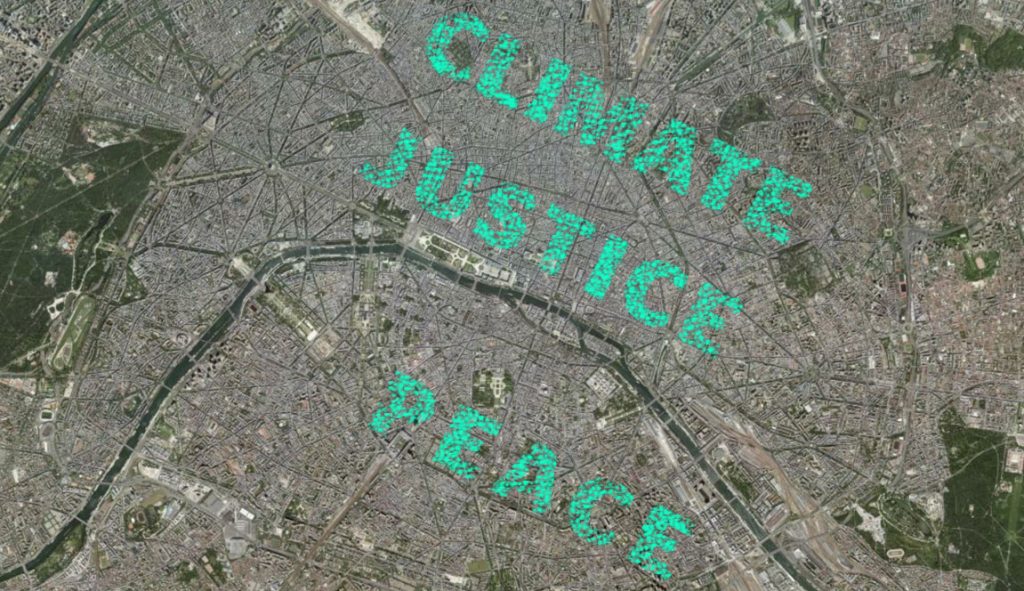 As politicians cop-out on genuine climate action at the international climate talks in Paris, over 2,000 activists from the Friends of the Earth International federation, joined by thousands more from Paris sent a global message for climate justice and peace, writ large across the city.

Environmental organisations, movements and individuals, including over 40,000 people online, peacefully reacted to the state of the climate talks, on the streets of Paris, and called for the transformation of the energy system away from corporate-driven dirty energy to socially-controlled and owned renewable energy.

Jagoda Munic, chairperson of Friends of the Earth International said: “We have shown true people power today. Instead of acting with ambition and urgency, decision-makers are kicking critical issues down the road, so people are taking things into their own hands – building a movement into 2016 and beyond. Politicians will not stop the energy revolution.”

The Paris climate summit has witnessed numerous struggles on energy, food, forests, and trade, but, in the face of a planetary emergency, little is yet delivered in line with equity and justice, according to Friends of the Earth International.

Malika Peyraut, campaigner for Friends of the Earth France said: “There is a state of planetary emergency and politicians are failing to act. Despite a clamp-down on civil liberties, people are writing history on the streets of Paris – demanding climate justice and peace. The French government must shift financing from dirty energy like coal and nuclear, towards the socially-controlled and owned renewable energy the world needs.”

Maruška Mileta, from Young Friends of the Earth Europe said: “As youth, we reject a backdoor deal made by and for rich countries, which will condemn millions of people in the global South to death. The climate talks in Paris were rigged from the start, and were never likely to genuinely tackle the climate crisis. System change will only happen through the movement building we’ve witnessed on the streets of Paris.”