The far-right means game over for the climate. Here’s why. 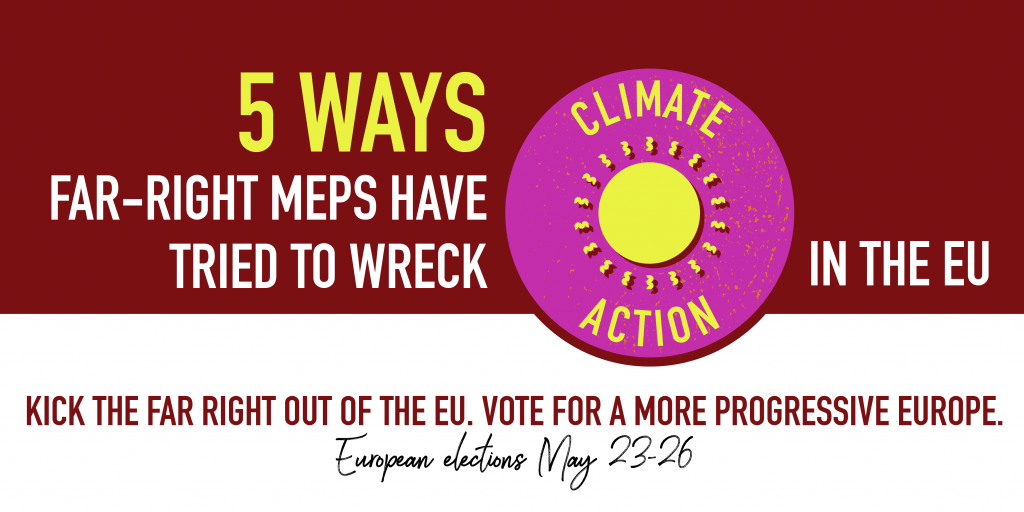 At the moment, there are 175 Members of the European Parliament (MEPs) who we consider to be far-right, or who represent far-right national governments. They are members of three political blocs – the European Conservatives and Reformists, Europe for Freedom and Direct Democracy, and Europe of Nations and Freedom, as well as a number of ‘non-attached’ MEPs who don’t sit with any bloc.

Polling suggests that after this year’s European elections in May, this number could increase substantially. This would be a huge problem for our rights and environmental protection across Europe. This week we looking at the implications for the climate in more detail.

Even centrist political parties pretend to be trying to tackle climate change. But the far-right are in outright denial. Here’s a few choice quotes:

Germany’s far-right party, the AfD: “CO2 is not a pollutant, but an indispensable component of all life.”

The UK’s UKIP party says the effects of CO2 are “one of agriculture’s greatest friends”, and their splinter party is full of notorious climate deniers.

And the Dutch Party for Freedom denies there is independent evidence of manmade climate change, calls it a “hoax“. Meanwhile far-right parties in Denmark, Sweden, Estonia and Austria also doubt or reject climate science.

2. And this means they torpedo climate action in the European Parliament

It’s one thing to spread misinformation, but fake news has real-world consequences when these people are elected to public office.

Whether it’s boosting renewables, making buildings more energy-efficient, or cutting CO2 emissions from transport, far-right parties in the European Parliament voted against them all.

Analysis from the Adelphi Institute shows this pattern repeating over and over again during the sitting European Parliament’s term between 2014 and 2018.

3. Not only do they hate clean energy, they prop up the fossil fuel industry

After years of campaigning, the European Parliament supported new rights for people and communities to set up and run their own renewable energy projects. Community power initiatives are vital to build the just energy transition we need away from fossil fuels, and put power back in the hands of communities.

The good news? The vote passed. The bad news? If there had been more far-right MEPs, it wouldn’t have. 80% of them either voted against it or abstained.

4. Their national-level policies show how they would wreck the climate

You’d be hard pushed to find many people who think coal is a good idea in the EU these days. The main coal lobby now employs just two people, and the debate has largely moved on from the world’s most polluting fuel, with the question now how quickly to transition away from it. (The science says: right now.)

But a number far right parties across the EU openly support coal – including UKIP in the UK, and PiS, who are currently in power in Poland.

Meanwhile, Greece’s Golden Dawn is dedicated to their “right to exploit” their natural resources (i.e. drill for offshore fossil gas), and other far-right parties in Finland and Sweden deny Europe’s historical responsibility to slash greenhouse gas emissions entirely. France is also adding to the mix, where Marine Le Pen, the leader of the far-right National Rally, is running a #StopWindmills campaign using dodgy numbers.

Basically, they would wreck the climate at any level of political power.

5. They hate the Paris agreement

To be honest, we aren’t its biggest fans – because it doesn’t go anywhere near far enough to prevent dangerous climate breakdown.

It is, however, the only long-term international agreement to tackle climate change we’ve got for now – and the far right want to pull us out of it, Trump-style. Whether it’s the Austrian FPO, the Dutch Party for Freedom, or the Italian Lega Nord, they reject it out of hand.

Climate breakdown doesn’t know borders, and the only way we’ll prevent the worst of it is by working together – not cutting ourselves off from the rest of the world. People in the Global South are already being displaced by climate change and being forced to flee to Europe for their own safety.

It’s now or never to prevent the worst effects of climate breakdown. Do we want these people to have more power?

To keep up-to-date on the European Elections, sign up at www.ttimv.eu/EuropeWeWant