Smash patriarchy, save the planet! 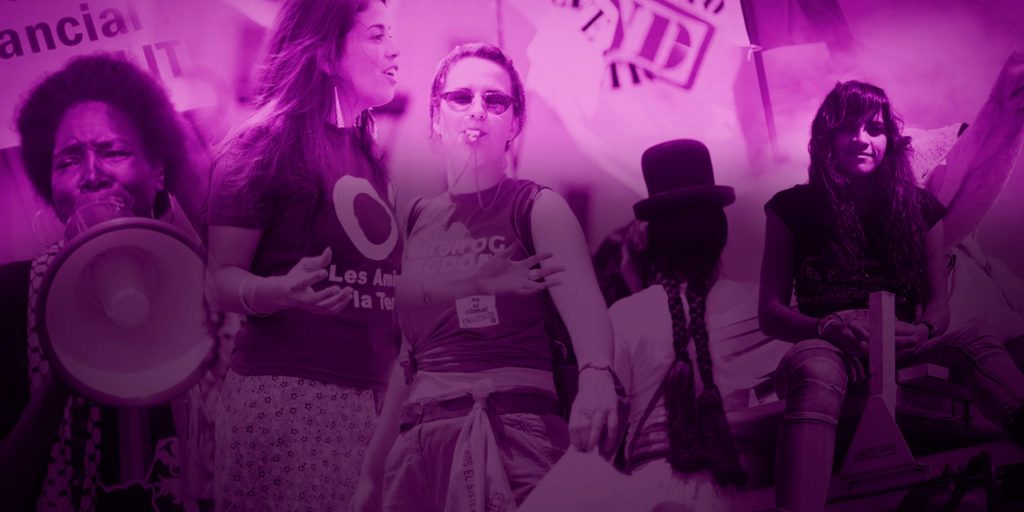 Gender Justice - collage by Friends of the Earth International

In honour of International Women’s Day, Katie Hodgetts reflects on the female environmental activists that have inspired and empowered her, contemplating not only their work, but their role in joining the dots between gender inequality, the environment and wider systemic failings.

While International Women’s Day means many things for many different women, for me the crux of it is: Empowered women, empower women. Today, we focus more consciously on celebrating the social, economic, cultural and political achievements of women, empowering other women to join the collective global outcry to accelerate gender parity. But apart from achievements, the day is also about recognising past and ongoing struggles, and paying homage to the scores of anonymous toil and blood that have characterised this plight. Furthermore, it is about recognising the continued struggle that women, particularly BAME (black and minority ethnic) women, still face.

What does environmentalism have to do with gender parity? In short, a lot. Both women and nature are subordinated by our patriarchal capitalist system, because economic production is valued higher than non-productive output that women have traditionally been assigned to, such as strengthening community bonds, raising children, taking care of food and family.

Each one of the following women has contributed to joining these dots. More than that, their work has been deep-seated in passion and integrity, and repeated to us that women are strong, and fearless and fighters.

Wangari Maathai became the first African woman to win the Nobel Peace Prize after founding the Green Belt Movement. This organisation cites its mission as ‘empowering communities, particularly women, to conserve the environment and improve livelihoods’. What began as a humble mission to plant trees for food blossomed into an organisation famed for advocating human rights, good governance and peaceful democratic change through environmental stewardship. Not guns, not violence, not colonization to increase food yield, but stewardship of the land and speaking ‘truth to power’.

“Throughout Africa (as in much of the world) women hold primary responsibility for tilling the fields, deciding what to plant, nurturing the crops, and harvesting the food. They are the first to become aware of environmental damage that harms agricultural production: if the well goes dry, they are the ones concerned about finding new sources of water and those who must walk long distances to fetch it.”

Her work on contemporary eco-feminism has held a mirror to environmental degradation and injustice, reflecting back the worldview that causes a culture of male domination, exploitation, and inequality for women. The two are watered from the same tap, argues Shiva.

Naomi Klein, Canadian author and journalist, is one testament to the idea that the pen is mightier than the sword. She has been a key figure in creating dialogue about the inexplicable link between neoliberalism and climate change, for example in her book This Changes Everything. In doing so, Klein succeeded in cracking open the ‘nature’ shell that climate change discussions were framed inside, exposing them to the other afflictions of neoliberalism – patriarchy, race, and gender. To me, she politicised the polar bear. “Climate change is the single greatest market failure”, argues Klein, linking environmental degradation and climate change to systemic narrative of dominance, mastery and economic individualism.

March 2nd honoured Berta Cáceres, who was murdered two years ago in her home. Berta, an eminent environmental and indigenous rights activist, led her Lenca community against the construction of a hydroelectric dam in Honduras. She was awarded the Goldman Environmental Prize in 2015, but was robbed of this and her life due to the exploitation of women and nature, overseen by a system of impunity. Berta’s death opened my eyes to the role of corporate power within women and environmentalism. Women like Berta are perilously standing up for their rights, to face repression and violence, like the land they are trying to defend. A stark reminder that the plight of women has been stained by blood, and a stark reminder that these fatal struggles still remain. Honduras is one country of many that have prioritised the development and profit of the sectors of mining, forestry, agribusiness and fossil fuels, over people. Profits extracted at the price of life.

“I cannot freely walk on my territory or swim in the sacred river and I am separated from my children because of the threats. I cannot live in peace, I am always thinking about being killed or kidnapped. But I refuse to go into exile. I am a human rights fighter and I will not give up this fight.”

Together each of these women have pushed the frontiers of what I understood to be ‘environmentalism’. But this is only four examples of an incredible array of environmental defenders that identify as women. Many of these do not have the opportunity to enter mainstream media, and their struggles will remain unknown. Forgotten in history seem to be the lives of women of colour. So to women known and unknown, who have risen up in a system that works against them, I raise a glass.