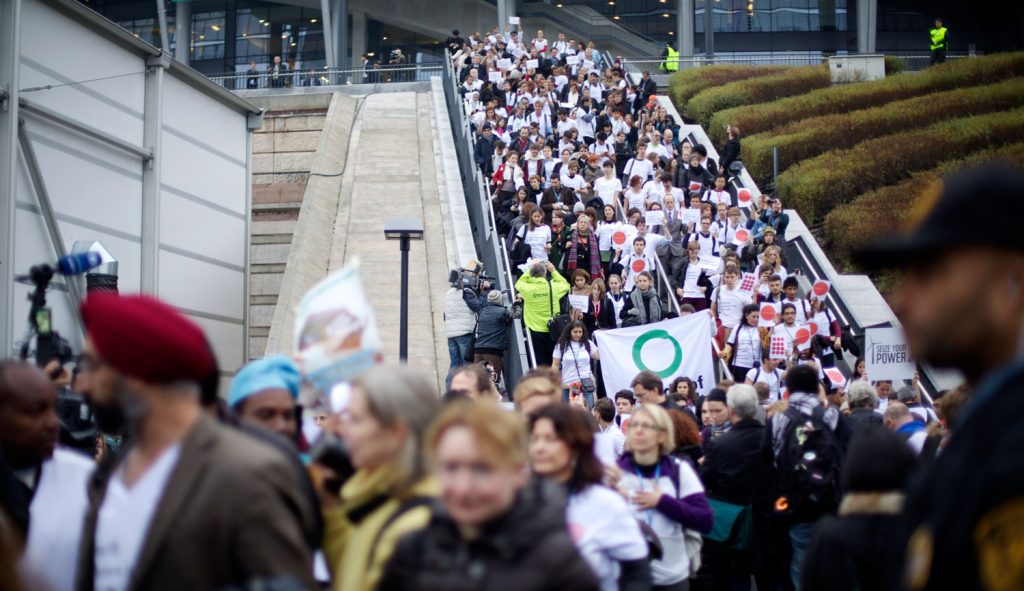 One day before the scheduled conclusion of the international climate talks in Warsaw, hundreds of climate activists – including Friends of the Earth – have walked out in protest at the lack of ambition at the talks, and in solidarity with people affected by climate change.

The walkout included social movements, trade unions and major environmental, development and youth groups, such as Greenpeace, Oxfam, WWF, Action Aid and the International Trade Union Confederation, as well as many others. Together they represent millions of people who demand real climate action [1]. The delegates who walked-out wore t-shirts with the slogan ‘polluters talk, we walk’ to signify the toxic influence of dirty energy corporations on the climate talks and the positions of many national governments.

Susann Scherbarth, climate justice and energy campaigner for Friends of the Earth Europe said: “We are walking out in frustration and disappointment – rich industrialised countries here in Poland have done nothing to cut emissions or provide real finance to tackle climate change. We also walk out in solidarity, with those communities and countries who stand to lose so much from climate change, and for whom these talks have done so little. Enough is enough.”

The Polish government’s decision to invite sponsorship from big polluters and to host a coal summit during the talks has already drawn heavy criticism from civil society organisations.

Magda Stoczkiewicz, director of Friends of the Earth Europe commented: “Big polluters were welcomed with open arms and the negotiations are driven by corporate interests. There is no room for people or planet. The Polish presidency’s short-sighted coal-driven policy marks these talks out as one of the dirtiest yet.”

Industrialised countries’ governments are neglecting their responsibility to prevent climate catastrophe, and protect those that are losing so much as a result of climate change. Their positions at the global climate talks are increasingly driven by the narrow economic and financial interests of multinational corporations, according to Friends of the Earth, in particular Australia, Canada, Japan and the US.

Maruska Mileta, from Young Friends of the Earth Europe said: “At a time when the climate science is clearer than ever, young people feel increasingly let down by our governments. They are prioritising short-term economic interests over a liveable climate for all of our futures.”

Friends of the Earth Europe is calling on European politicians to push for fast and fair emission cuts in line with science, and a renewable energy-powered future that puts the interests of people at its centre. It is calling for binding EU climate and energy targets for 2030, at least 60% cuts in greenhouse gas emissions by 2030 and ambitious energy efficiency and renewables targets. This needs be alongside more ambitious pre-2020 action.

There needs to be international recognition that communities and countries are suffering irreversible losses due to climate breakdown, now, and governments need to put new money on the table to help developing countries compensate, adapt to the impacts of climate change and tackle urgent development needs.