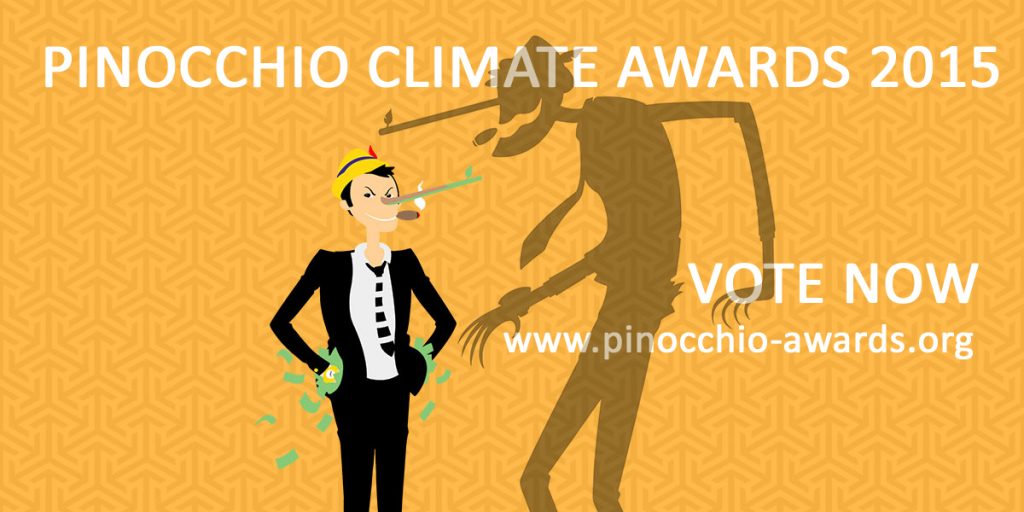 The companies most guilty of undermining climate action are exposed today in the Pinocchio Climate Awards. Cash from big corporations is being used, through lobbying or greenwashing, to undermine necessary action on climate change the organisers of the awards say, a few weeks ahead of a crucial climate summit in Paris.

Some of the largest and most influential companies in the world are up for public vote, which opens today, for awards in three categories – lobbying, greenwashing and impacts on communities. Nominees include sponsors of the UN climate talks BNP-Paribas, EDF and Engie, who have significant investments in dirty energy, from fossil fuels to nuclear energy.

Juliette Renaud, corporate accountability campaigner for Friends of the Earth France said: “The Pinocchio Climate Awards expose those companies trying their hardest to undermine desperately needed action on climate change, and those with the least regard for local communities. Your vote can help ensure governments tackle these companies head on, in order to protect human rights and the environment.”

Nominees include those whose activities are harming communities worldwide, with Shell nominated for its legacy of environmental and social devastation in Nigeria. Other nominees are Total, the oil and gas giant, for infiltrating the European renewables lobby, Avril for pushing biofuels, Chevron, Yara and mining company Anglo-American.

Pascoe Sabido, researcher and campaigner for Corporate Europe Observatory said: “These Pinnochios show the immense damage to poor communities and efforts to tackle climate change being inflicted by unaccountable corporations. Those causing the problem should not be deciding how we fix it. It’s time we kicked the Big Polluters out of climate negotiations at the UN and national level”

Colin Roche, extractive industries campaigner for Friends of the Earth Europe said: “For too long local communities have suffered at the hands of big corporations blind to the suffering inflicted by their pursuit of profit. Urgent action is required to ensure that corporations are held accountable for the damage inflicted on human rights and the environment.”

The Pinocchio Climate Awards call on governments to take concrete action to end corporate impunity through binding regulation, and to ignore corporate false solutions, giving priority to the protection human rights, the environment and the climate.

The worst Climate Pinocchio for each category will be announced on 3 December 2015 in a public awards ceremony during the UN climate talks in Paris. For more information, and to vote: http://www.pinocchio-awards.org/