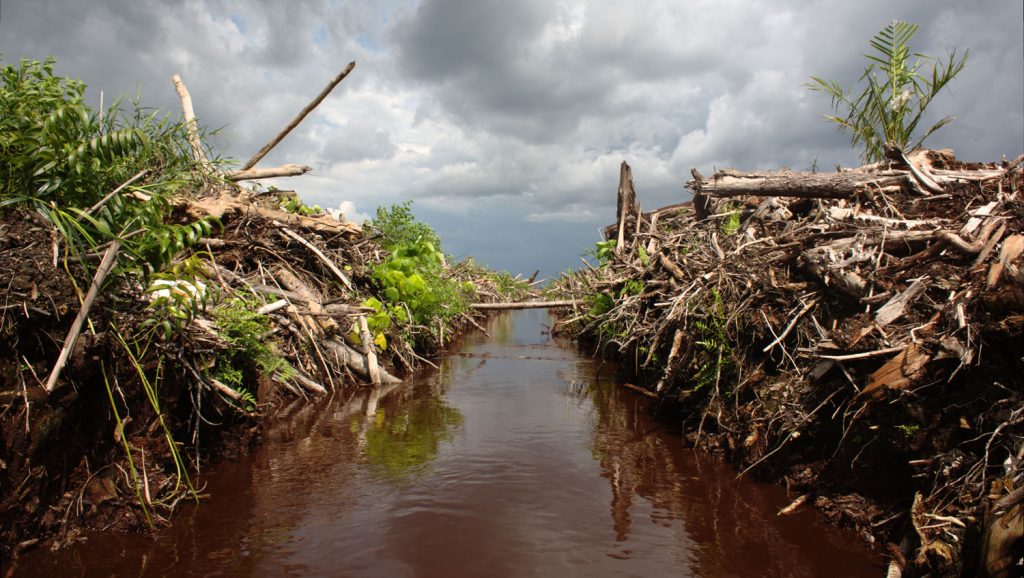 Activists from Friends of the Earth Europe and Indonesia have completed an awareness-raising tour of Europe, bringing their experiences of environmentally and socially destructive palm-oil production in South East Asia, to the continent most responsible for financing it. Palm-oil companies, often with the backing of European investors, have been involved in land-grabbing, deforestation and the illegal production of palm-oil in Indonesia, according to Friends of the Earth Europe.

Plantations managed by the BumitamaAgri Group are in clear violation of national laws, and are accused of being responsible for deforestation and endangering orang-utans. Palm oil giants like Wilmar International purchase more than half of BumitamaAgri’s palm oil, bringing illegal palm oil into their supply chain – with financial assistance from household names like Rabobank, BNP Paribas and Deutsche Bank.

Anton Widjaya, director of Friends of the Earth West Kalimantan, Indonesia said: “I’ve travelled from the other side of the world to tell investors, politicians, and the general public that palm oil companies in Indonesia are causing environmental destruction and are displacing local communities. I am calling on Europe to act, to change its policies and stop European financers supporting this destruction beyond its borders.”

The tour is part of Friends of the Earth Europe’s campaign to stop European banks and financial institutions providing financial aid to destructive palm oil companies. In a press conference alongside CNCD-11.11.11, SOSfaim, FairFin, and Oxfam, Anton Widjaya presented figures on palm oil expansion in Indonesia: 56.55 million hectares have been cleared due to palm oil expansion, with over 650 documented conflicts with local communities.

Anne van Schaik, sustainable finance campaigner at Friends of the Earth Europe, said: “This tour is to alert European financiers about problems created by palm oil companies. Anton’s presence in Europe and his meetings with financiers will help address the serious problems that come from investing in illegal and unsustainable practices. Friends of the Earth Europe calls on governments to regulate European financiers in order to stop the financing of unethical palm oil companies.”

Friends of the Earth Europe calls on banks, pension funds and investors to move away from financing companies involved land-grabbing or deforestation.

UPDATE: On December 5, Wilmar International bowed to public pressure and published a ‘No Deforestation, No Peat, No Exploitation Policy’ that it says, “aims to advance an environmentally and socially responsible palm oil industry”.

In response to this move, Friends of the Earth International published a statement calling on the company to fulfil its commitments:

“Wilmar’s commitment to improvement comes in the wake of many years of land-grabbing, fueling of conflicts, destruction of endangered habitat, and other abuses – all of which has rewarded Wilmar and its associates with enormous profits, and established the company as the world’s largest palm oil trader.

In light of this, Wilmar needs to take immediate steps to demonstrate that it takes this new policy seriously. These steps include bringing an immediate end to conversion of natural forest to plantations; halting its purchasing of palm oil from Bumitama Agri Ltd.; immediate adherence to national laws in Uganda and all the countries where it operates; and the full and demonstrable application of Free Prior and Informed Consent (FPIC) in all of its operations, including consideration for returning lands which were previously acquired without communities’ consent and through processes which did not respect their ownership rights. Without these concrete and immediate actions, the statement of Wilmar will be merely greenwash to prevent pressure from civil society groups.

Friends of the Earth will be closely monitoring the implementation of Wilmar’s stated commitments.”

You can read the full statement on the Friends of the Earth International website.