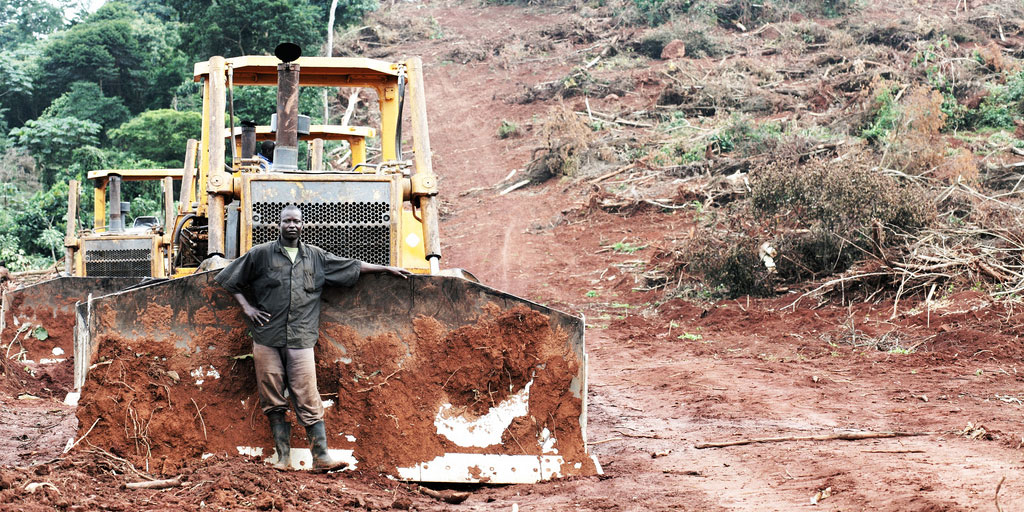 Released on the eve of a World Bank Conference on Land and Poverty, a new report reveals widespread violations of people’s rights and environmental destruction from a land grab initially funded by the World Bank in Uganda.

The Friends of the Earth Uganda report provides first-hand accounts from communities forced to give up their livelihoods, food supply and access to water.

The World Bank had historically provided millions of dollars in funding and technical support to palm oil expansion in forested islands off the coast of Lake Victoria in Kalangala, Uganda. Nearly 10,000 hectares have already been planted covering almost a quarter of the land area of the islands. While the Bank has since disassociated itself from the project, the land grabs continue.

Palm oil plantations have come at the expense of local food crops and rainforests. Local people have been prevented from accessing water sources and grazing land. Despite promises of employment, locals have lost their means of livelihood and are struggling to make ends meet.

David Kureeba from the National Association of Professional Environmentalists (NAPE) / Friends of the Earth Uganda said: “People’s rights to land are being demolished despite protection for them under the Ugandan Constitution. Small scale farming and forestry that protected unique wildlife, heritage and food of Uganda is being converted to palm oil wastelands that only profit agribusinesses. The Ugandan Government must prioritise small scale ecological farming and protect people’s land rights”

John Muyiisha, a farmer from Kalangala, tells of how he woke up one morning to find bulldozers destroying his crops. He had been on the land for 34 years. Other community members were contracted to plant palm oil and then forced to sell their land because of debts, low income from palm oil and no food crops.

Kirtana Chandrasekaran, Friends of the Earth International Food Sovereignty Coordinator said:“Testimonies from Uganda show the fallacy of trying to make land grabbing work for communities or the environment. Decades of policies to privatise land and promote industrial farming from the World Bank have set the stage for a massive global land grab.”

“Governments around the world need to stop land grabbing, not just try to mitigate its worst impacts. Governments must abide by their Human Rights obligations on land and drastically reducing demand for commodities such as palm oil from the West.”

The project is a joint venture between global agrofuels giant Wilmar International and BIDICO, one of the largest oilseeds companies in Eastern Africa with start-up funding and policy support from International Financial institutions such as the World Bank and the Ugandan Government.”

Robbie Blake, agrofuels campaigner for Friends of the Earth Europe said: “Europe’s growing addiction to agrofuels is drving up consumption of vegetable oils and palm oil and contributing to land grabs. Flawed policy is resulting in higher emissions than from burning fossil fuels, while displacing farmers from their land and destroying their livelihoods.”