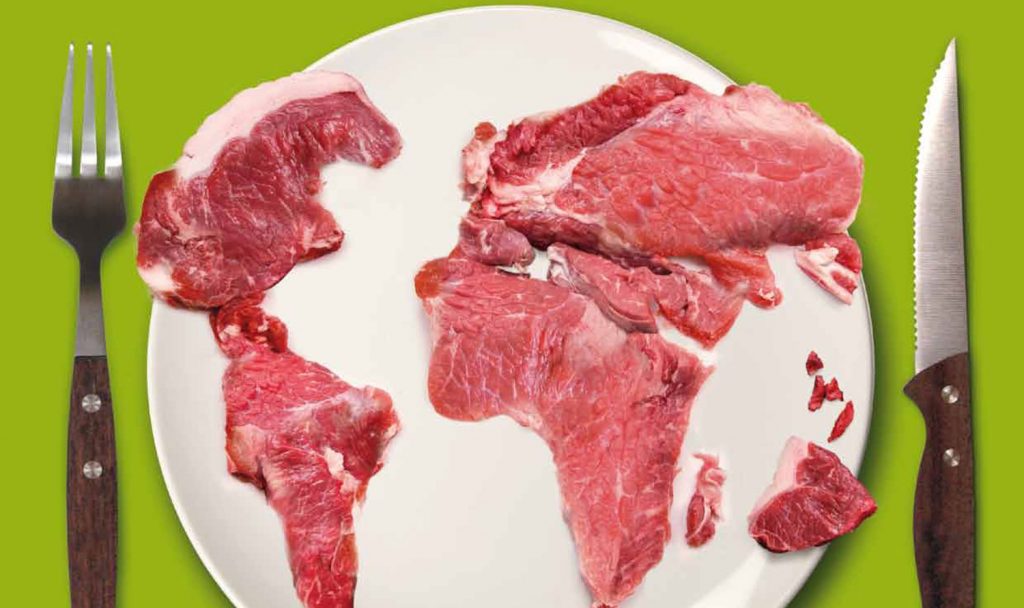 How overconsumption and intensive meat production wrecks the planet

Intensive meat and dairy production is having an increasingly devastating impact on society and the environment, according to a new ‘Meat Atlas’ published today by Friends of the Earth Europe and the Heinrich Boell Foundation.

The way we produce and consume meat and dairy needs a radical rethink. Our industrialised production system is untenable, according to the report, since it depends on scarce land and water resources, and passes on hidden costs to the consumer. Curbs on corporate control over food need to be implemented, it says, to reduce the impact on society and the environment.

The Meat Atlas aims to catalyse the debate over the need for better, safer and more sustainable food and farming and advocates clear individual and political solutions.

Adrian Bebb, senior food, agriculture and biodiversity campaigner for Friends of the Earth Europe said: “Diet is no longer a private matter. Every time we eat, we are making a political choice, and we are impacting upon the lives of people around the world, on the environment, biodiversity and the climate. Huge amounts of resources go into the food on our plates. Sustainable alternatives exist to the dominant destructive, corporate-controlled and intensive global system for producing and consuming meat.”

The report outlines the impact of intensive meat and dairy production on freshwater usage and land. Worldwide agriculture consumes 70% of available freshwater, one third of which goes towards raising livestock. The increasingly intensive livestock sector is also one of largest consumers of land and edible crops, with more than 40% of the annual output of wheat, rye, oats and maize used for animal feed, and with one third of the world’s 14 billion hectares of cultivated land used to grow it.

To produce a kilo of beef requires 15,500 litres of water – the same amount required to produce 12 kilos of wheat or 118 kilos of carrots. To make a hamburger requires more than 3.5 square metres of land.

Barbara Unmüßig, President Heinrich Boell Foundation: “Intensive meat production isn’t just torture for animals. It destroys the environment, and devours great chunks of our raw materials which we import from the global South as animal feed. After China, Europe is the biggest importer of soya. Argentina and Brazil are dramatically increasing their soya cultivation, and it’s being fed almost exclusively to the animals we slaughter. Rising meat consumption is forcing up land prices. This has devastating consequences: Nearly a third of the world’s land is being used to grow animal feed. Meanwhile, small farmers are losing their land and their livelihoods. That schnitzel on our plates jeopardises the food security of many people in the global South.”

The report also warns that the trade talks between the EU and the US risk pushing food and farming standards down on both sides of the Atlantic. Big food and biotech companies want to lift EU restrictions on genetically modified (GM) foods and animal feeds, and are challenging consumer labelling laws. They also want to undermine the EU’s ‘precautionary principle’ which sets food safety standards, and aim to further globalise and industrialise the meat industry.

There are solutions, and the organisations urge legislators to reform the livestock sector. The Sustainable Food Communication [4], due to be launched by the European Commission in spring 2014, should address dietary issues, underlining the basic right to a nutritious diet based on seasonal and local food, which is grown sustainably, respects cultural diversity, and includes a smaller daily intake of good quality meat, according to the organisations.