From the frontline of anti-shale gas struggles 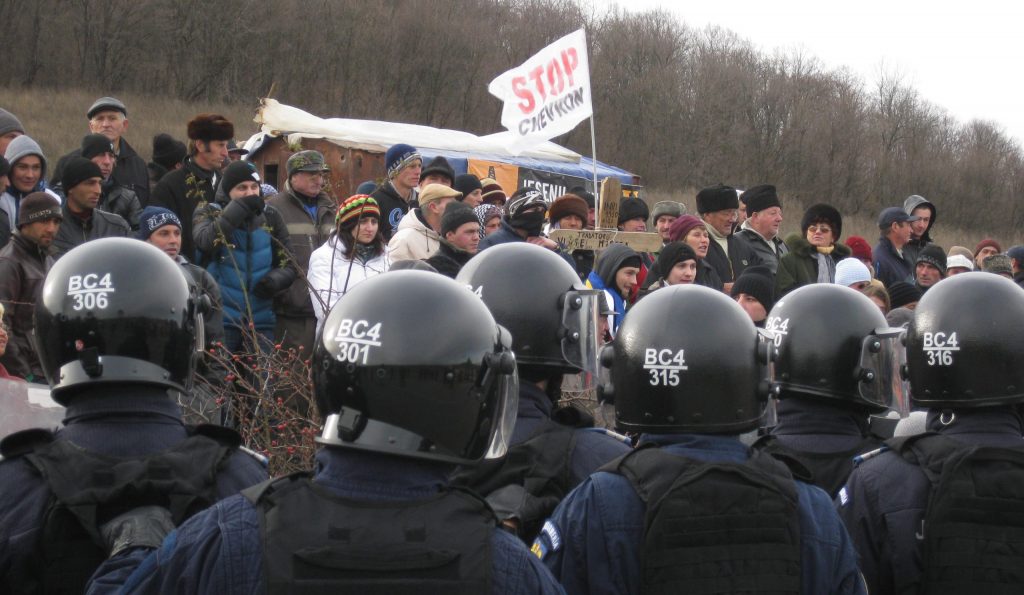 Antoine Simon and David Heller from Friends of the Earth Europe, travelled to the village of Pungeşti in Romania this weekend to observe and document the village’s resistance to shale gas. The community’s stand against Chevron has become one of the front lines of the struggle against dirty energy in Europe.

Arriving in the village of Pungeşti, about four hours north of Bucharest in the east of Romania, the first thing we experienced was a police road block. The police checked the papers of our driver and allowed us to continue. We found out later that we were the last car allowed to enter the village. Other people arriving from across Romania were held at the checkpoint for several hours. The sight of police exercising their power in an arbitrary way was to become very familiar over the coming 24 hours.

We travelled to Pungeşti to show our solidarity with the struggle against the start of Chevron’s shale gas drilling in the village. There is widespread, and well founded, concern that the drilling (potentially using fracking) will pollute the ground water on which the overwhelmingly rural community – unconnected to mains water supply – depends for their daily use in drinking and cooking, sanitation and farming.

A peaceful demonstration from the villagers in mid-October physically blocked Chevron’s first attempt to move into the area. This forced the giant American oil and gas company to suspend work for several weeks, and acknowledge the need to ensure public backing for the scheme. A camp was established by the villagers opposed to shale gas in order to protect the proposed drilling site. It has become a base for the resistance to Chevron in the village. However, no attempt was made by Chevron to engage in debate or negotiations with the local community. At the start of December, riot police violently evicted the camp and Chevron was able to begin work on the site. 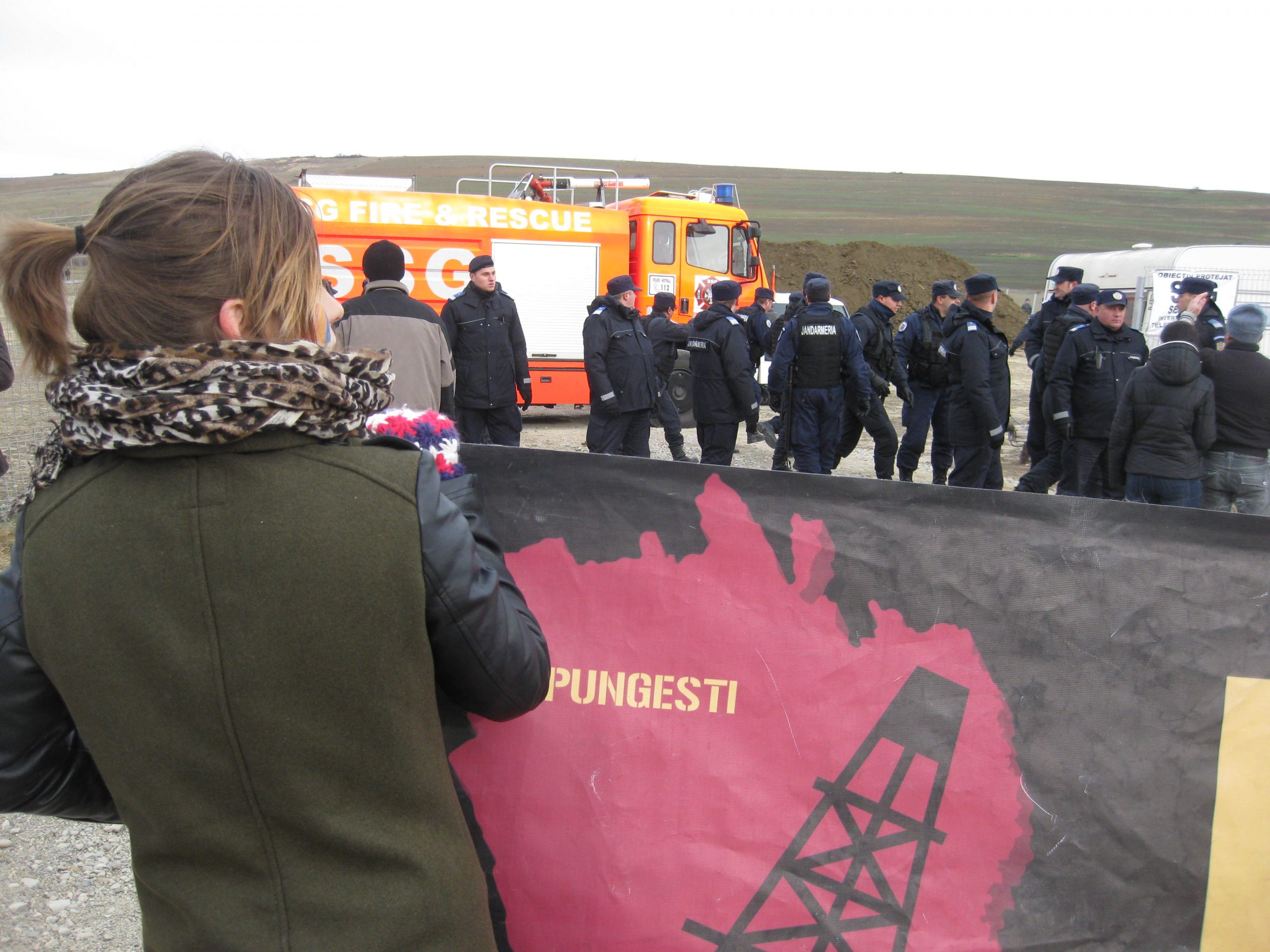 As we got closer to the protest, it soon became clear that Chevron has totally failed to win the support of the local community. A crowd of several hundred had gathered, and some people were beginning to dismantle the newly erected fence around the drilling site. This action was a clear sign that the community and their supporters were willing to take the only action available to them in order to remove the threat to their lives and livelihoods.

Opposite the drilling site, we held flags and banners, singing and chanting, braving the cold wind. We stood shoulder to shoulder with people of all ages who had come to join the protests. One person who had given up his job in Bucharest to join the protest camp told us, “When I’m older and my children ask me ‘What did you do when Chevron arrived in Romania?’ I don’t want to tell them that I did nothing to protect the water and the land.”

It is easy to understand why this sentiment is widespread amongst a community and a movement that feel betrayed by elected officials which have consistently refused to listen to them. The local mayor has allowed Chevron to drill on land he acquired in a questionable manner. He has not been welcome in the village since the start of the protests. The prefecture (representative of the national government in the county) has twice prevented a local referendum on the topic. At national level, the prime minister was elected in 2012 with a pledge to oppose fracking and the plans for the widely opposed Rosia Montana gold mine, but has made a massive political u-turn and has now become an enthusiastic supporter of both plans.

The most obvious symbol of the conflict with the authorities is the presence of the riot police (Jendarmeria) who have been sent into the region as a kind of occupying army. It was these forces who entered the private property where we were stood and arrested people, often violently, and seemingly at random. Many people were chased across the hills by lines of riot police with their shields and batons. Those of us who remained were surrounded in the protest camp by police. There were more violent arrests.

Back in the village, we gathered in the local shop, which also did service as a bar. The evening news reported that Chevron had made an announcement that it had once more temporarily suspended the works in the village. A little while later, riot police entered the shop and ordered the owner to close. People who had left the bar by the back door were arrested, and dragged violently by police to their van.

As we stood outside the bar in the cold, we were very thankful to the villagers who provided accommodation for the night for those who had travelled to support the protests. We were offered a very warm – physically and figuratively – welcome in a nearby farm. The farmer explained that the feeling of community in the village has increased in the past few weeks, as people unite to oppose their common enemy.

The following day, we awoke to news that Chevron had resumed drilling. The temporary halt to work had lasted from sunset to sunrise. The village felt like it was under siege. As we walked along the main road there were riot police stationed every few metres, perhaps as many police as houses. Everywhere we went we met villagers who had been beaten and arrested during two months of harassment by the authorities. One boy had been arrested beaten and fined by police that morning while he was simply taking his cows to pasture.

The village is determined to continue resisting, and the surrounding villages are also starting to prepare for the arrival of Chevron on their land. It seems unlikely that Chevron will ever gain support from the local population for its plans to extract the gas from under their feet and leave little behind except pollution.