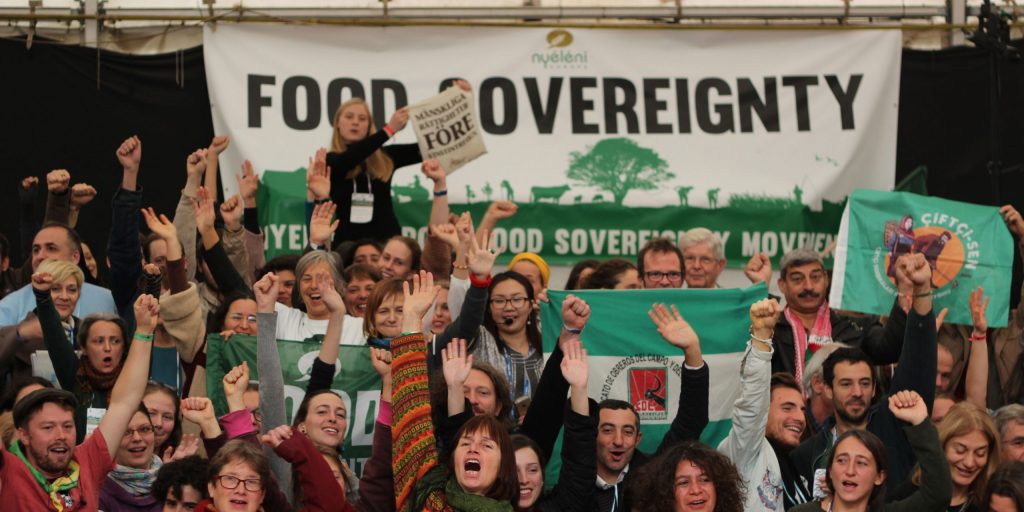 The fight back against industrial agriculture and for a just and sustainable future for farming and peasant farmers took a leap forward this week as the largest-ever European Forum on food sovereignty concluded.

After five days of discussions, the groundwork has been laid to take back n, relocalise our food systems and multiply food sovereignty platforms across the continent by the participants from more than 40 countries who gathered at the second Nyéléni Forum on Food Sovereignty. A huge diversity of people involved in the food system were present, including farmers, food and agricultural workers, trade unionists, researchers, activists, fisherfolk, pastoralists, indigenous peoples, consumers, and human rights defenders.

A major accomplishment of this forum was the convergence of Eastern European and Central Asian organisations with their Western European counterparts.

Ramona Duminicioiu from the Romanian host organisation Eco Ruralis, said “Most countries in Eastern Europe are like Romania: they have a very large and vibrant, but equally vulnerable peasant population, threatened by land grabs and cheap land investments from global capital. During this week, we initiated the collective regional struggle and stepped up the coordination of the food sovereignty movement in Western Europe. If the food sovereignty movement is strong in Eastern Europe and Central Asia, it is strong in Europe as a whole.”

The convergence in Cluj-Napoca lead to the formation of joint food and agricultural plans, promoting an agroecological model of agriculture.

Jocelyn Parot, General Secretary of Urgenci said “Millions of consumers across Europe are supporting alternative farming models, based on agroecology: they are joining farmers in their fight to regain democratic control over food chains. They’re calling for a change in public policies, which should protect their initiatives instead of pushing for destructive commercial imperatives. This forum was a key step for consumer organisations to develop a strategy within the food sovereignty movement.”

To tackle the destructive exploitation of the industrial food system, a number of key actions were chosen by the forum. These included strategies for just and equitable rights for farmworkers – and migrant workers in particular – public policies that put resources (including land, water, and indigenous tenure rights) in the hands of local people instead of corporations, food distribution systems that put local, sustainable food first, a push for a binding UN treaty to regulate businesses and human rights, and a more inclusive movement that represents marginalised peoples. Central to these actions is agroecology, a radically local, inclusive, and sustainable approach to agriculture.

Unusually for discussions around food policy, war and its effects were addressed, with the Turkish delegation noting that it was vital to stand up for peace.

Ali Bulent Erdem from Ciftci-Sen, the Small Farmer Unions Confederation in Turkey, said: “War forces people to leave their lands, their homes, their livelihoods. The refugee crisis in Turkey and Europe is a result of war. As defenders of food sovereignty we fight for the rights of refugees and welcome them in our countries. It is vital for the global struggle for food sovereignty to stand up for peace.”

In opposition to rising nationalism across Europe, we were uniting across countries from the East to the West, coming together and joining forces. Amidst the negotiation of toxic free trade agreements, like the recently-signed CETA deal between the EU and Canada, which threaten the very existence of peasant farmers, we stand together with food sovereignty at the centre of our cooperation.