Europe’s gas addiction: The end of the pipeline 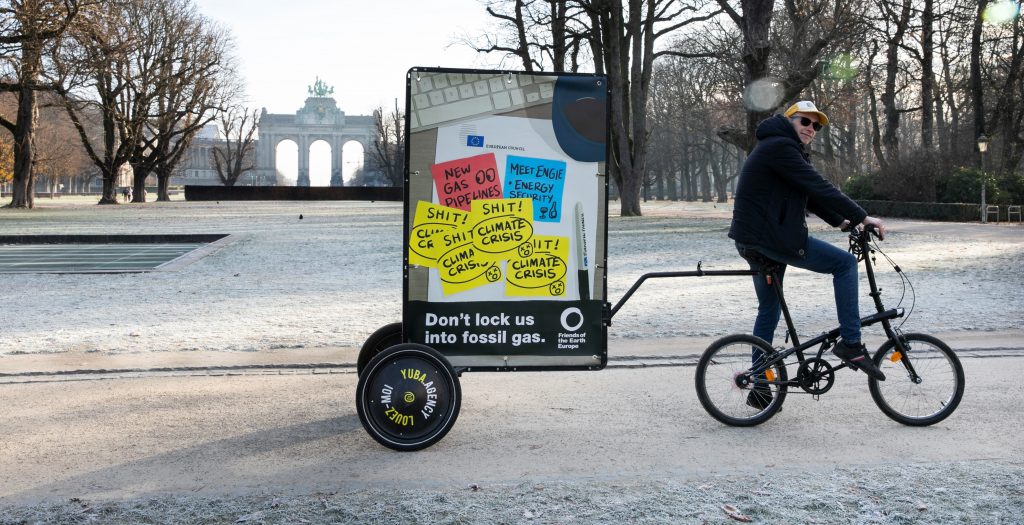 Our reminder for the European Council in Brussels (C) Laure Geerts

The EU Council conclusions of 15 December 2022 reference the goal of “concluding long-term contracts”, namely referring to LNG imports. This would effectively lock us into fossil fuel dependency for 10 – 20 years to come.

Since the Russian invasion of Ukraine, Europe’s political leaders have taken part in meeting after meeting to discuss the looming energy crisis and rising costs. Meanwhile, ordinary people continue to face skyrocketing energy bills while fossil fuel companies’ profits continue to grow and, as we enter into 2023, Europe’s decision-makers seem unable to think beyond fossil fuels to answer Europe’s energy needs. Europe is facing a difficult choice: people will freeze without short-term emergency support, or people will fry without long-term fixes. Are we bound for a lose-lose game?

Fossil fuels, including gas, have always driven conflict, inequality and planetary destruction since we started burning them, and are at the heart of the major crises affecting the world today. Even before this crisis, one in four households were unable to sufficiently light, heat or cool their homes, meaning 50 million individuals were living in energy poverty across the EU. Yet, at the end of 2022, the struggle for survival is a sad reality. Winter is at the door, energy prices are at a historical high, inflation is rampant, and people across Europe are facing the unconscionable choice between keeping their homes warm and feeding their families.

No one made the choice to power their homes using fossil fuels however. The same politicians who are now considering expanding gas infrastructures forced fossil fuels on us through an energy system totally based on oil, gas and coal, a system that was never meant to serve people or the planet, but only profiteering corporations and governments.

European leaders’ actions suggest we face a harsh choice: either introduce more fossil gas infrastructure or let people struggle to feed and keep their families warm this winter. That is not the case. Locking Europe into more fossil fuels will not help alleviate the energy crisis quickly enough to stop people suffering right now and in the coming months, instead it will add more fuel to the fire that is the looming climate crisis. More gas means more carbon dioxide and also more methane in our atmosphere, a greenhouse gas that is 86 times more potent than carbon dioxide in the shorter term, making it an extremely powerful polluting force that we can’t afford to keep releasing. Yet, decision makers are reaching for the cheque-book to fund new infrastructure plans – setting aside €10 billion under the REPowerEU plan – to import more LNG to Europe, which will take at least 2-3 years to build, build new gas pipelines which have a 40 year lifetime and are also willing to lock us into 10–15 year expensive contracts that keep us dependent on fossil fuels for the long haul.

A global dependency on gas and other fossil fuels got us into this mess in the first place. It has driven the climate crisis, pushed people into energy poverty, given power to despots and dictators, and fuelled wars and geopolitical instability. What we need is not more fossil gas infrastructure that would lock Europe in fossil energies and pour public money down the drain, but an emergency support system to shield the vulnerable and energy-poor, paid for by fossil fuel companies, starting with a ban on disconnections. Nobody should be left in the cold this winter.

European institutions should also strengthen existing targets to reduce energy consumption to stay within 1.5 degrees of global heating, and governments should target first and foremost energy-intensive industries and infrastructures.

Social injustice is at the heart of Europe’s gas crisis, as well as the ongoing climate crisis, and policy-makers’ stubborn dependency on fossil fuels is plunging people into poverty. The fossil fuels industry and policy makers carry a major responsibility, as they are those who locked Europe into a Catch22 situation, and until we end our energy dependency, we will always be at the whim of a market we don’t control, we didn’t ask for and which is making us worse off.

Power for people and for the planet

Fossil gas is Europe’s second largest source of carbon emissions, just another fossil fuel wrecking the planet. The only way to fight the climate crisis, shield people from the insecurity of an obsolete fossil fuel energy system and stop financing pollution and war, is to phase out gas and all fossil fuels, end the development of new infrastructures and cut all dependence with the energy currency of dictators, autocrats and warmongers.

The energy crisis Europe is facing is the smoking gun signalling that this is Europe’s golden opportunity to kick-start a full transition to a renewable energy system, leaving fossil gas behind. We have the energy solutions we need and were able to mobilise the necessary funds, as €674 billion has been mobilised across European countries since the start of the energy crisis in September 2021 to shield consumers from the rising energy costs. A clean, safe future is a future without gas, based on a fair and transparent energy system, with everyone having the right to green energy backed by massive investment in deep renovation programmes and renewable energy schemes. This could be Europe’s win-win moment for people and the planet.

Moving off fossil fuels doesn’t mean a reversal of progress. It means creating a global energy system that works for people in a lasting way, without killing the planet. Fossil fuels are the old way, fossil gas belongs to the past. If there was ever a moment for Europe to take the leap to a new clean energy system, it’s now.