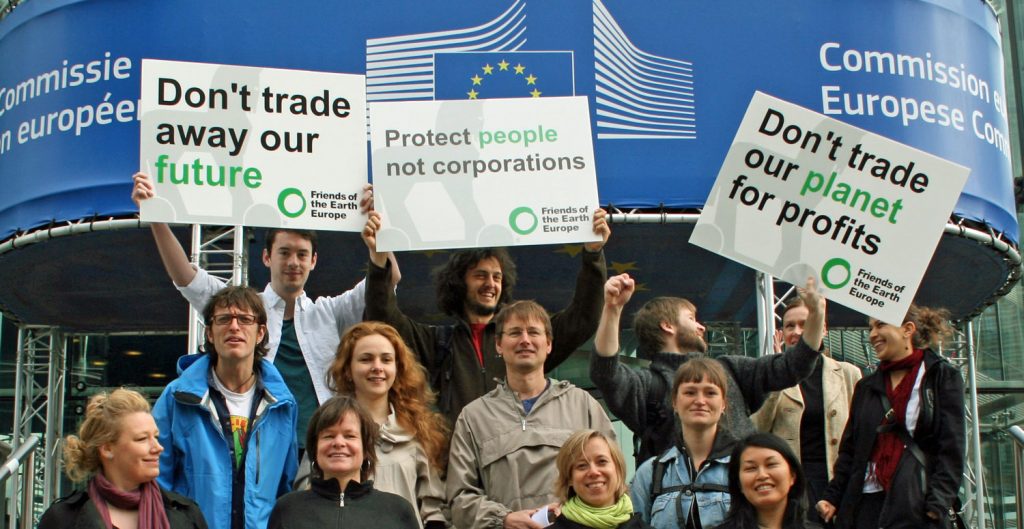 Friends of the Earth Europe have written to EU Trade Commissioner De Gucht, to warn that fair, sustainable and safe food could permanently be damaged by the transatlantic trade deal currently being negotiated.

The letter, together with Compassion in World Farming and Institute for Agriculture and Trade Policy, reacts to a leaked official negotiation document on food safety in US-EU trade talks. Friends of the Earth Europe is concerned that the objective to always prioritise trade will undermine EU food safety safeguards, and will put European food at risk of hidden GMO contamination.

Europe’s citizens have every right to be worried about the impact of the proposed free trade deal with the USA (the Transatlantic Trade and Investment Partnership – or TTIP). A key document on food safety has been leaked and it shows how the European Commission is preparing to trade away how citizens are protected – in spite of reassurances from the EU’s Trade Commissioner Karel de Gucht that “these issues just aren’t on the table”.

The public has had to rely on leaks to find out what’s really being traded away, since the TTIP trade deal is being conducted in secret. The new leaked document appears to be a proposal from the European Commission, and while it is a partial text, it is enough to confirm our fears that this trade deal is about making life easier for big business, at the expense of fundamental food safety measures that protect consumers in Europe.

What the text, obtained by the Institute for Agriculture and Trade Policy, makes clear is that the trade deal is rapidly becoming a race to the bottom in terms of public, health and environmental protection. The text reveals that Europe would need to accept contamination levels for adulterated foods set not by member states, but instead by the international body ‘Codex Alimentarius’. This body has set consistently low safety standards, thanks in part to the lobbying of industry and the US government.

The EU often has stricter standards then Codex, for example permitted levels of contamination from pesticides in food are largely lower in the EU then those set by Codex. Although the leaked text suggests that importing countries can object to these standards, it could nevertheless mean EU citizens would be eating higher levels of contaminated foods in the future.

One case that raises particular concerns is ractopamine, a growth promoting drug fed to 80% of pigs and 30% of cows in the US, but currently banned in Europe. The EU has a strict zero tolerance approach to any food containing this drug, because it does not recognise the drug as safe enough to enter the food chain. But according to this leaked food safety chapter, Europeans could end up eating ractopamine-laced sausages, as the international Codex standard, controversially, does allow low levels of ractopamine – though the EU rejects this decision. The right of the EU to set its own safety standards is now seriously in question and that can only be bad news for European citizens.

Despite fundamental differences between the EU and USA in how we assess food as safe, the trade deal, and this leaked chapter, is all about accepting the laws and safety standards of the USA, as if they were our own. This is what the negotiators call ‘mutual recognition‘. It is clear from the leaked text that citizens in Europe are expected to accept the US’s food safety system, as long as it provides an ‘appropriate level of protection’ – though nearly all commentators agree it is far less stringent.

Moreover, it is clear throughout the text that wherever there might be objections to the safety of food coming from the US, the implementation and enforcement of food safety safeguards must not create an ‘unjustified barrier to trade’. What this means is that trade, and company profits, trump food safety concerns. Europe’s “precautionary principle” approach to assessing risks to the public is clearly under attack. Could this mean more disinfection treatments for factory farmed meat in the future, currently largely banned in the EU? It shows once again why food safety should not be up for discussion in trade negotiations.

Not only that, but it appears that the checks and inspections that are permitted on food imports will be more or less removed. Instead of testing and controlling food shipments at the port of entry for disease or contamination, as we currently do in Europe, the trade deal proposes to scrap these and instead rely on reassurances from the US exporters. This is a recipe for disaster. Since the US government has made it clear that the US food industry itself must provide these tests and guarantees for food safety, it means that food corporations will be in charge of determining the safety of their own products. Governments will take a back seat.

This is a case of letting the fox guard the chicken house. In effect it is privatising the European safety net by taking the import controls away from elected governments and handing them to businesses, which is a recipe for more food scandals and substandard food entering the EU. Expect to see more cases of food adulterated with illegal genetically modified (GM) contaminants on your plate.

This leaked text adds weight to the growing opposition to this trade deal. While we don’t yet have the full picture, due to the insupportable level of secrecy, we know enough to say that we don’t trust those who say European safeguards “aren’t on the table” and will not be weakened. It’s time our political leaders paid attention to the interests of citizens, family farmers and the environment. Public health safeguards, and in particular food safety, should not be part this, or any other trade deal. It is time they really were taken off the table.

Adrian Bebb, food, agriculture and biodiversity campaigner for Friends of the Earth Europe said:
“European concerns that the free trade agreement with the USA would undermine public safeguards were scoffed at by the Commissioner in charge of the negotiations. Now leaked documents show that the public has every right to be concerned. Behind closed doors, negotiators appear to be dismantling Europe’s food safety net in order to allow big business to make more profits.”