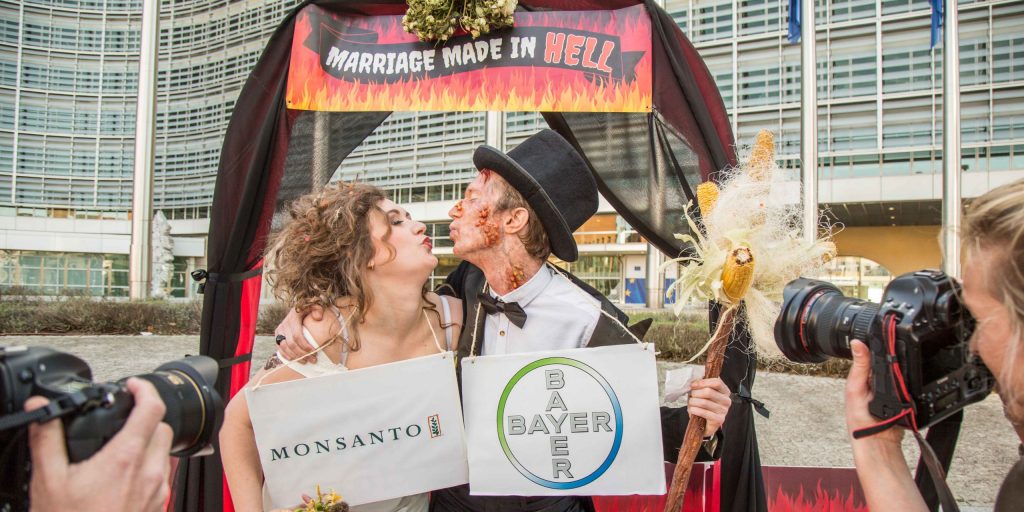 New polling shows citizens are against the planned merger of agribusiness giants Bayer and Monsanto, with a majority (54%) thinking it is “very” or “fairly important” that the European Commission blocks it – more than three times the number who think it would be unimportant [1].

The YouGov survey results from Germany, France, Spain, Denmark and the UK also shows that the merger gives 47% of EU citizens “serious” or “very serious” concerns, while just 11% think the merger offers any potential.

Citizens also expressed concerns that the merger would negatively affect the farmers’ choices of what crops they would be able to farm, the environment, and the amount of chemical substances used in farming to control pests and weeds.

Adrian Bebb, food and farming campaigner at Friends of the Earth Europe, said “The planned merger between these giant agribusiness corporations has very little public support. EU competition chief Margrethe Vestager has built her reputation on holding powerful corporations to account, and she must seize the opportunity to block this dangerous and unpopular merger.”

Anne Isakowitsch, campaign manager at SumOfUs, said: “A merged Bayer-Monsanto would be relentless in its pursuit of putting corporate profits over the protection of small farms— eventually driving up prices for consumers. Farming families and communities across Europe would carry the burden of this giant merger. EU Commissioner Vestager must recognize the unique threats posed by a Bayer-Monsanto merger and move swiftly to reject their proposal.”

Joerg Rohwedder, senior campaigner at WeMove.eu said: “Citizens in Europe care about what grows on the fields and ends up on their plates. A large proportion of them expect the merger, if agreed, would have a negative impact on farmers and the environment. The European Commission should stop this merger from hell.”

The poll is the latest temperature check of the public’s position on the merger. Over one million Europeans have signed petitions calling on the European Commission to block it, and have been joined by more than 200 civil society organisations, from farmworkers to international development groups.

The agribusiness sector is seeing an unprecedented wave of concentration which, if allowed, would lead to the majority of the world’s commercial seeds and pesticides being controlled by a handful of corporations. In 2017, the European Commission waved through the consolidation between Dow-Dupont and ChemChina-Syngenta. If approved, Bayer-Monsanto would be the world’s biggest agriculture corporation.

Of the 7,318 respondents from Germany, Denmark, France, Spain and the UK:

Unless otherwise stated, all data are provided by YouGov Deutschland GmbH. 7.318 respondents participated in the survey, which took place between the 09.02.2018 and the 13.02.2018. The results were weighted and are representative for the population of the UK, Germany, France, Denmark and Spain (age 18+).