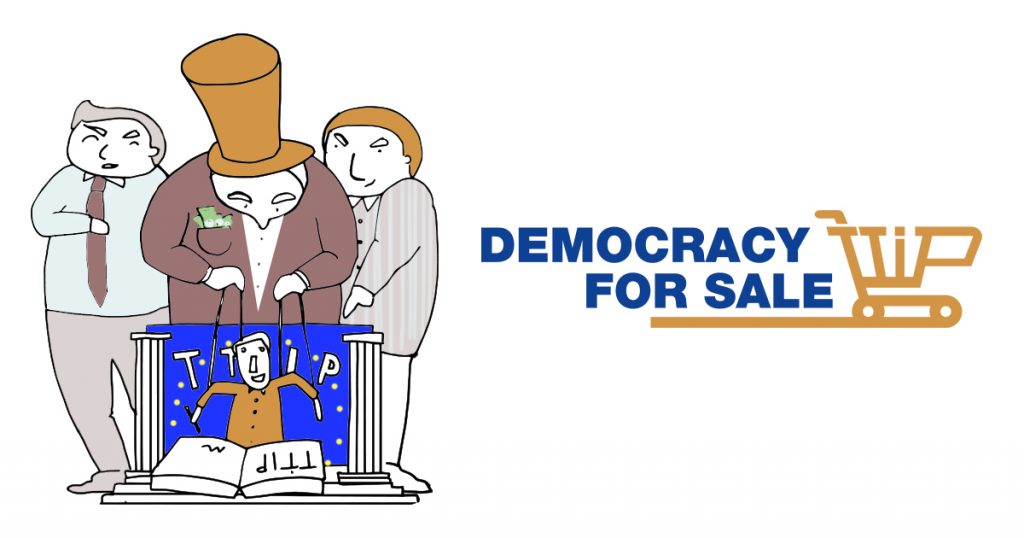 Campaign groups today launched the Democracy for Sale Awards, an initiative giving citizens the opportunity to call out the corporate lobbyists most successful in undermining democracy and the public interest by capturing the EU positions for a Transatlantic Trade and Investment Partnership (TTIP).

The online awards organised by Corporate Europe Observatory, Friends of the Earth Europe, LobbyControl and WeMove.EU focuses on big industry lobbies influencing the ongoing TTIP negotiations. For the fourth year, the EU-US trade negotiations are continuing behind closed doors, despite the far-reaching consequences which a deal will have on consumer protection, health and environmental standards, as well as democratic decision-making in Europe.

Even though citizens have every right and reason to be concerned about this prospect, negotiation texts remain under lock and key leaving them in the dark about the talks. At the same time, corporate lobbyists have enjoyed privileged access to EU negotiators and their advisers; from the very beginning they have been able to steer negotiations from the inside, sometimes even upon invitation from the Commission.

The Democracy for Sale Awards are showcasing the evident complicity between big business lobbies and the European Commission regarding the TTIP negotiations [1]. Investigations by the organisers have revealed examples of collusion in the chemicals, pesticides, car and pharmaceutical chapters of the TTIP texts, as well as the controversial clauses regarding investment and regulatory cooperation.

Citizens are invited to have their say on this subversion of public interest on the awards website and cast their vote for the most brazen example of collusion between lobbyists and the TTIP negotiators. Voting will close on October 12 and the award-winning lobby will be ‘honoured’ for its questionable success capturing the TTIP talks in the interest of its corporate stakeholders.

Corporate Europe Observatory’s trade policy campaigner Lora Verheecke said: “We think the most successful lobby group deserves an award in recognition of how effectively multi-billion corporations and their lobby groups can buy up and steer our democracy. With the Democracy for Sale Awards citizens can name and shame those subverting the interest of the public in EU trade deals.”

The Democracy for Sale Awards website provides detailed information on the background of the EU-US negotiations on TTIP as well as all nominees: democracyforsale.eu