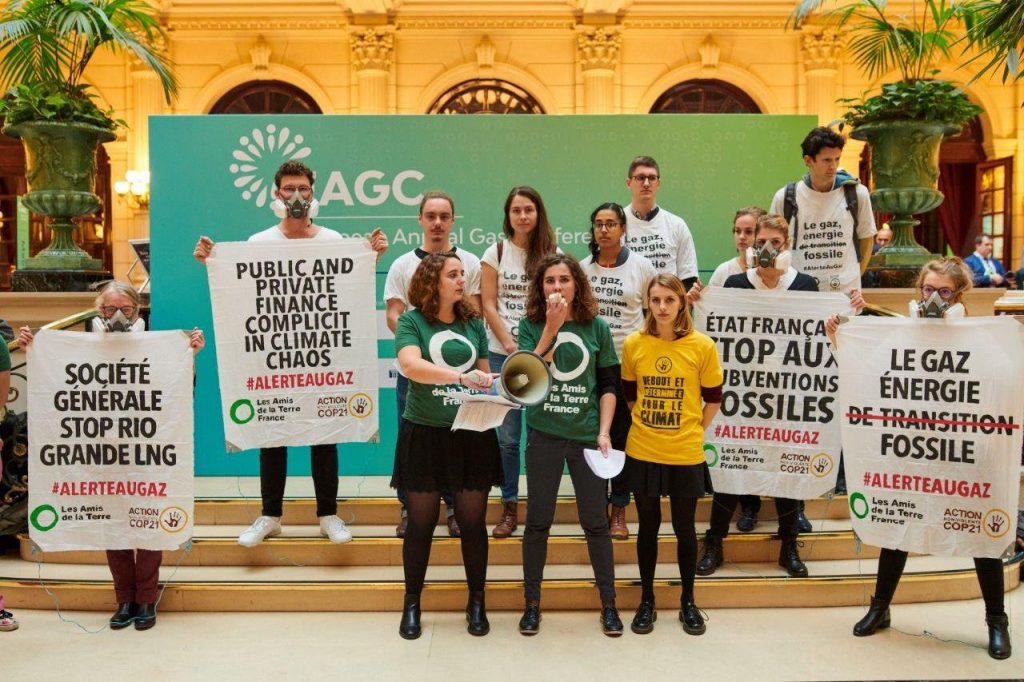 91 climate activists from Friends of the Earth France and Action Non-Violente COP21 have today forced the cancellation of the second day of the European Annual Gas Conference (EAGC) in Paris.

ACTION  Now in Paris, activists are disturbing the European Annual Gaz Conference to protest against the public and private funding of gaz industry.

Gaz is not a bridge for energy transition, but a fossil fuel. #AlerteAuGaz #StopRioGrandeLNG pic.twitter.com/Levdbm0TLL

The conference brings together 300 delegates comprising the gas industry, French and European institutions, and bankers including Société Générale. The activists call for an end to massive public and private financing of gas in line with the goal of staying below 1.5°C of global heating.

91 climate activists infiltrated the luxurious Hotel International Continental in Paris, where the European Annual Gas Conference was being held, at 2pm this afternoon and disrupted the smooth running of the second day of the event. The conference organisers were forced to cancel the afternoon programme and clear the premises.

The activists denounced the myths propagated by the gas industry and its major funders, who aim to promote gas as a low-carbon transition fuel. From the Permian basin in the south of the U.S., to the Mozambican coast, to the Arctic, monumental new projects to extract ever more gas are being developed worldwide. These fossil fuels are destined for the European market. Any expansion of gas is, however, incompatible with the imperative of keeping global warming below 1.5°C.

“Despite civil society organisations calling multiple times for massive action to halt climate breakdown and its terrible consequences worldwide, there has been massive support by stakeholders from the private and public sector to expand gas. These stakeholders have their finger on the trigger of our climate, but we, citizens, are determined to do whatever it takes to stop them, even engaging in nonviolent civil disobedience if we have to.”

For climate activists, gas does not deserve to be supported with public taxpayers money or private banks, any more than other fossil fuels like coal or oil. Amid a parliamentary debate in France on public support for fossil fuels through export guarantees, the government and MPs were challenged by activists to end to these grants.

“Emmanuel Macron himself said at the UN in September: it is completely incoherent and irresponsible to continue to support fossil fuel industry exploration of new oil and gas fields overseas, when it is banned in France. However, the government keeps fuelling climate chaos through export guarantee funding.”

Société Générale, the only private bank invited onto the conference stage, is one of the world’s largest creditors to the gas industry and is a leader in financing the export of U.S. shale gas from fracking. The bank has been in the spotlight for several months as it holds in its hands the future of the Rio Grande LNG terminal project, to export shale gas to Europe from Texas.

“The Rio Grande LNG megaproject is key for the expansion of shale gas in the US and the world and it is championed by the Trump administration. Société Générale gave itself until the end of the year to decide whether it would quit supporting Rio Grande LNG. The choice is simple: keep playing the game of a President who just officially withdrew from the Paris Agreement; or finally walk the walk and refuse to fuel this ticking time bomb.”