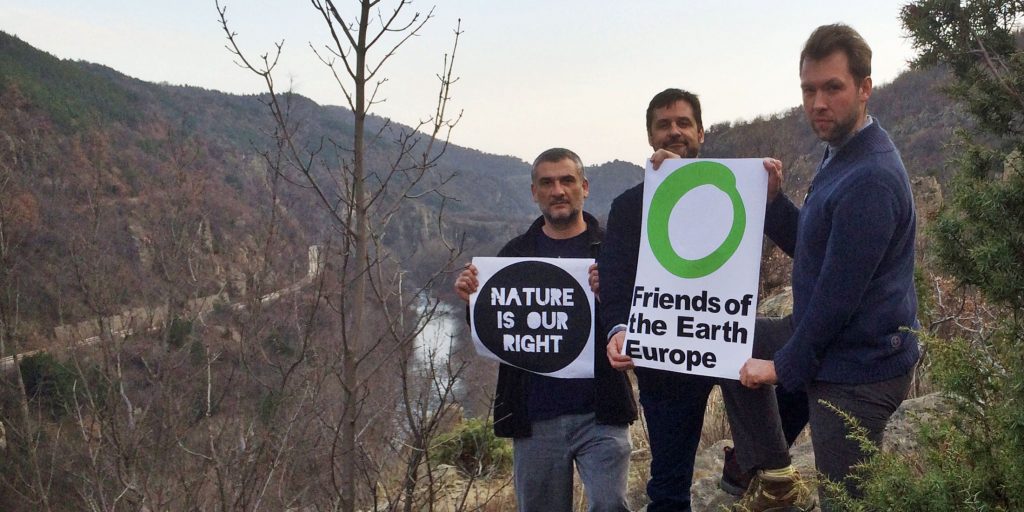 The building of an EU-funded motorway linking Bulgaria and Greece, through Kresna Gorge – a stunning wildlife haven protected by EU nature laws – would be a disaster for nature and local people, and could result in up to €781 million being returned to the European Commission, claim Bulgarian and international NGO experts.

If the project is given the go-ahead in April, it would also provide the first test of EU Environment Commissioner Karmenu Vella’s recent pledge to better implement EU nature laws.

Kresna Gorge national park #Bulgaria – such beauty could soon be under motorway tarmac, animals and people mown down by traffic#NatureAlert pic.twitter.com/5hhKce1zGR

The European Commission determined in 2008 that routing motorway traffic through the gorge would be illegal. [1] The “full eastern” option would also prevent losses of endangered species of European importance, and foster local economic development of agriculture, wines and tourism. [2]

The gorge is home to more than 3,500 species of flora and fauna, including many snakes, turtles and bats found nowhere else in Europe. There are more species of butterfly in one square kilometre of Kresna Gorge than in all of the UK.

Construction of the motorway must be completed by 2023 and in full compliance with EU nature laws. If either of these conditions are breached, the Bulgarian government risks having to repay up to €781 million of grants to the European Commission.

Robbie Blake, nature campaigner for Friends of the Earth Europe said: “I visited Kresna Gorge and saw with my own eyes how this stunning natural jewel is a vital hotspot for Bulgarian and European nature. No motorway could be built here without completely destroying nature in the gorge and the local community.

If this project is railroaded through, all eyes will be on EU Environment chief Karmenu Vella – will he stick by his recent decision to better enforce and implement vital nature protection laws?”

Fidanka Bacheva-McGrath, international campaign coordinator of CEE Bankwatch said: “If the Bulgarian Government tries to route the motorway through the gorge, this would break our obligations under EU law, would result in legal challenges, and cause delays that risk Bulgarian taxpayers having to pay back the entire grant of nearly €800 million. Building through the Gorge would be a disaster for Bulgaria, it would lead to a whole new fiasco.”

Danniel Popov, Bulgaria national coordinator at CEE Bankwatch said: “There’s absolutely no need to carve the motorway through the Gorge, as a good bypass route to the east exists, which would save the wildlife haven, be much less environmentally damaging, would avoid so many road deaths in Kresna, and would be better for local people and sustainable local development. The authorities should move forward with this plan, and fast, as it’s the only option to get the job done in time and legally.”

The Bulgarian Government is currently carrying out an Environmental Impact Assessment to decide on the most appropriate route, with the results expected by the end of April. The local community and the wider Bulgarian public then will be able to express their views on this, and it will have to be approved by the EU Commission. The NGOs have met with the Kresna municipatily, the Bulgarian Government and Road Agency to offer assistance in creating a high quality assessment fit with EU law, so that the Struma motorway bypassing Kresna Gorge can be developed before 2023.

[1] In 2008, the Environmental Impact Assessment for the Struma Motorway project, endorsed by the European Commission, deemed that any motorway construction in the gorge and the option to maintain the current road for international traffic (the so-called zero option) is not in compliance with the EU Habitats Directive because of the detrimental and unavoidable impacts on the protected biodiversity. The legally agreed conclusion was to route the motorway through the tunnel. [2] Table comparing the differences between the “Semi Eastern” route half through Kresna Gorge and the “Full Eastern” motorway’s route fully bypassing the Gorge to the east.