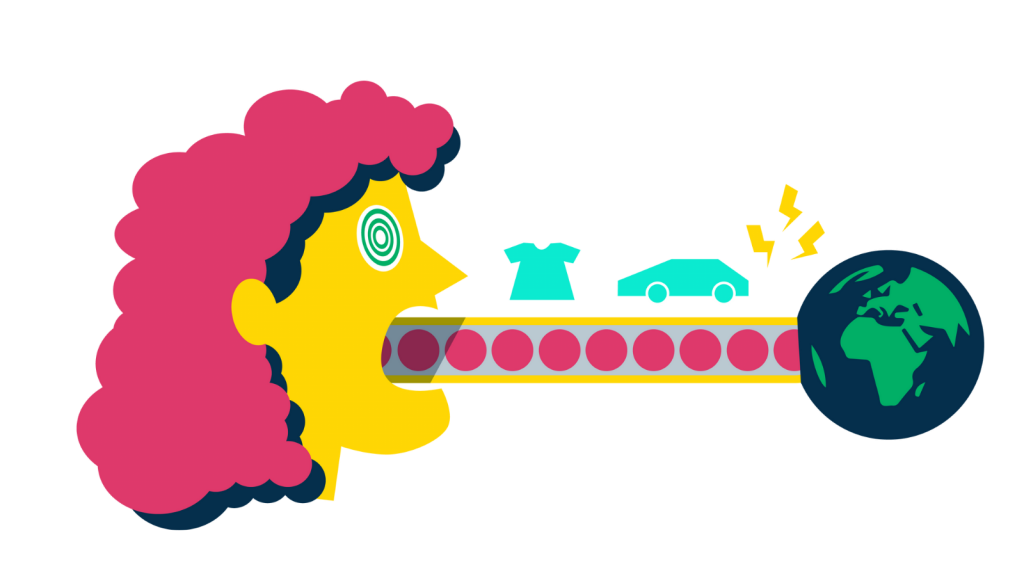 Nothing says “happy new year” like a bold and much-needed resource use reduction target. Following the Finnish and Dutch lead, the Austrian government is setting a new year’s resolution to systemically trim down on material footprint.

This article was chiefly authored by the European Environmental Bureau – on their website here.

Overconsumption is so last year.

With growing evidence of the close link between environmental degradation and social injustice with consumption and production, systemic overconsumption must cease to achieve greener and fairer societies. This does not only mean individual overconsumption of things like clothes and phones, but society-wide overconsumption relating to infrastructure, transport, buildings, energy systems, the military, etc.

Tackling this, Austria has been the latest country to take concrete steps towards reducing their resource use in absolute terms as a part of the country’s new Circular Economy strategy published in December 2022.

With the fifth largest material footprint in the EU, Austria currently consumes a whopping 33 tonnes of resources per capita, 19 tonnes above the bloc’s average and around five times more than what is considered sustainable.

The intensive use of resources in Austria, and in Europe at large, is a strain on planetary boundaries and social justice alike. In order to fuel growth-dependent economies, a small number of countries are carving away a disproportionate amount of Earth’s finite resources through endless extraction, production, consumption, and waste, at a speed beyond our planet’s regenerative capacity. In fact, for the global population to live the average European lifestyle, we would need 2.8 Earths.

Tackling this unfair and unsustainable use of resources takes strong and urgent commitments to shift away from the current consumption pattern.

With this in mind, Austria’s new targets are a new year’s resolution worth imitating. The targets, welcomed by the Austrian umbrella environmental NGO Umweltdachverband, set out to slash the country’s material footprint per capita by 80% by 2050 to maximum seven tonnes per capita, which is considered within a sustainable and just level by leading research. Furthermore, Domestic Material Consumption (DMC) must drop from 19 to 14 tonnes per capita by 2030. In addition, the strategy also sets targets for an increase in circularity rate and reduction of private household consumption.

A reduction target is the new black

Austria is the third EU country (joining the Netherlands and Finland) to set a resource use reduction target, and it’s the most ambitious and complete one yet. By setting such objectives, these governments are tackling systemic overconsumption and setting a clear direction for the economy to consume less resources in absolute terms. With a strong commitment to a circular economy, these policies recognise the limits and dangers of our current linear model of resource use, ensure a fairer green transition and address the climate crisis at its roots.

Unlike the Dutch and Finnish objectives, the Austrian target will also set reduction target for biomass, which addresses the pressing matters of food waste and deforestation to produce substitutes to fossil fuel products (e.g. bioplastics, bioenergy).

Austria has also upped the level of ambition. Compared to Finland, which aims to reduce domestic primary raw materials in 2035 to 2015 levels, Austria is aiming for an 80% slash in material footprint by 2050.

EU needs to catch up with the trend

Despite having overshot in many planetary boundaries, EU Member States and the EU Commission have stalled in addressing the matter of material footprints, with resource use reduction targets not included in the European Green Deal and national climate and energy strategies.

Europe’s unsustainable resource dependency has never been more evident than in 2022, where inflation and war in Ukraine stifled access to critical resources. Designing a circular economy based on sufficiency and sustainable use of materials is the only long-term solution for tackling any of the climate, social, or security crises. Essentially, setting these targets is key in transitioning towards a wellbeing economy.

Austria’s targets are the latest signal from a Member State for a concrete commitment and joint action at the EU level. The call echoes European Parliament demands for the Commission to adopt resource use reduction targets in its report on the Circular Economy Action Plan.

In fact, there are winds of change in the air. Recent developments in EU policies are nudging towards the right direction. In recent months, the newly released packaging law and the finalisation of the battery regulation are both pushing for waste reduction, reuse and recycling of resources, while the discussions on food waste reduction targets have been set in motion. In 2023, the Commission is expected to add material footprint as an indicator to the Circular Economy Monitoring Framework, making it an official indicator for Member States and a first step towards an EU-wide target.

Austria may have started 2023 on the right foot, it is now up to the remaining Member States and the EU to keep up the sprint towards ensuring our wellbeing without breaking planetary boundaries.

Who’s joining for the next lap?