Activists blockade mine site over threat to pristine fjord 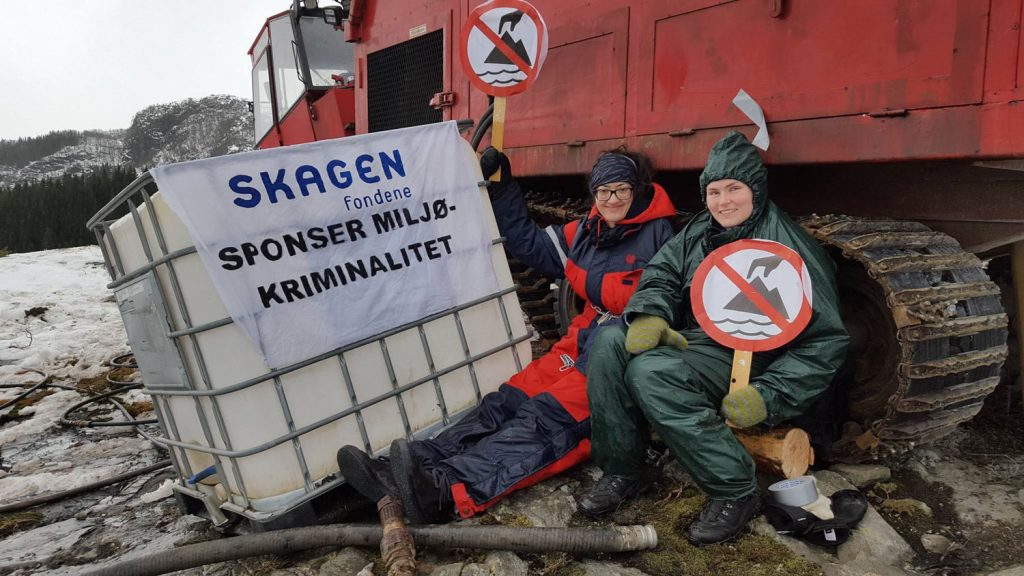 For ten days, locals and young activists, led by Young Friends of the Earth Norway, have been peacefully occupying machinery to prevent test drilling at a mining site near Førde fjord, west Norway. In April last year, the Norwegian government doomed another of its world famous fjords, Førde fjord, by granting permission to Nordic Mining to mine Engebø mountain for rutile ore, and for the waste to be dumped into the nearby pristine fjord.

Up to 250 million tonnes of toxic waste, including large amounts of heavy metals, could be deposited into Førde fjord over the next 50 years if the project, currently in its test phase, goes ahead. The fjord is a spawning site for cod and other important fish stocks like the threatened Atlantic salmon, and lined on the bottom with coral – this week orca wales and sea eagles were spotted.

The peaceful demonstrations began on February 2nd, and have received heavy-handed policing – with new activists removed and arrested by the police every day and fines for civil disobedience of over 1,000 EUR each. Nevertheless, the protesters say their actions will continue.

Ingrid Skjoldvær, chair of Young Friends of the Earth Norway said: “This mining project is insane, and must never be allowed to happen. Local people, marine researchers and environmentalists have protested for years that toxic dumping will be the death of the Førde fjord. We feel this is a crime against the Norwegian natural environment, as well as our biodiversity, including crucial fish stocks. We cannot stand by whilst the machines move in, and we will continue to block mining on Engebø mountain and the dumping of toxic waste in the Førde fjord.”

The dumping permit from the Norwegian government is contrary to national and international environmental legislation regarding water management, according to Friends of the Earth Norway, and potentially violates the European Water Framework Directive.

Norway is one of only five countries to continue the practice of dumping mining waste at sea, and the only country in Europe. Marine scientists, environmental organisations, fishermen and reindeer herders of the Sami people are united in opposition to the plans.