100,000 citizens call on EU farming ministers to serve up better future for agriculture 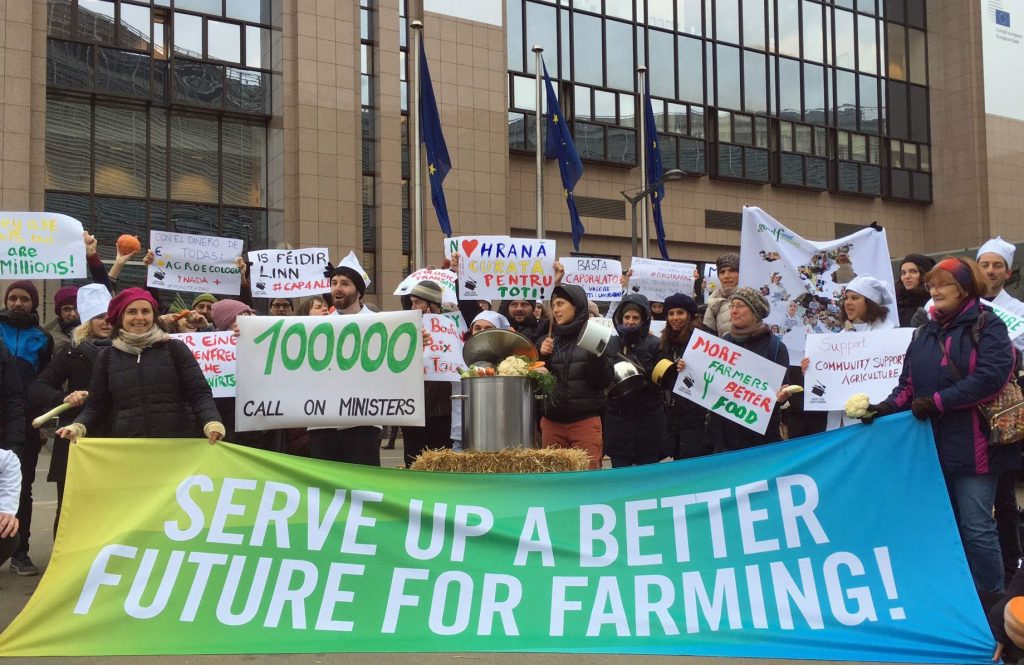 The Good Food Good Farming campaign organised a Disco Soup in front of the Council of the European Union today, calling on EU agriculture ministers to serve up a better future for farming. The campaign, made up of over 80 civil society groups (including seven Friends of the Earth groups), representing farmers, food activists, and environmental organizations, drew attention to the ongoing reform of the Common Agricultural Policy (CAP) and delivered 100,000 signatures of EU citizens, supporting demands for a fair, green and healthy CAP reform. The Disco Soup – a culinary and musical act of protest – was the final event of the European Days of Action which have brought together thousands of people across the EU.

The banging of pots and pans, the playing of music and the bright colours of seasonal vegetables interrupted the Monday morning commute in the heart of the EU quarter of Brussels. As EU agriculture ministers negotiated the future of the CAP, the Good Food Good Farming campaign raised the alarm and with its Disco Soup celebrated the diversity of sustainable agriculture, calling on ministers to serve up a better future of farming.

“So many Europeans, young and old, have voiced their concerns about industrial food production during the European Days of Action, now it is time to call on EU decision-makers to listen and to act,” said Jorrit Kiewik, director of Slow Food Youth Network, adding that a Disco Soup is not only about chopping up vegetables or dancing, “it is about showing that the food that we eat matters to many, and so does our food and farming system.”

An urgent call to EU decision-makers

The European Days of Action were developed this year in response to the reform of the EU’s agricultural policy. The organizations involved are concerned about the current EU’s food and farming system, and urge EU decision-makers to deliver a socially and environmentally ambitious CAP.

As Franziskus Forster, a small-scale farmer from Austria who represents the European Coordination Via Campesina, underlines, the CAP continues to fund a 20th century model of agriculture that is disastrous for wildlife, climate, and the environment, while millions of farms are disappearing across Europe.

“We urgently need to shift to agroecological and low-impact farming systems to protect nature, farmers’ livelihoods and the resources we rely on to produce food. This means ending subsidies for industrial agriculture and instead ensuring that all farmers procure decent prices and incomes, and making good food affordable to all.”

The closing event of the European Days of Action in Brussels carried the voices of hundreds of thousands of citizens in protest against industrial farming, and in favor of a CAP that is fair, healthy and good for people, animals and the planet. The activists handed over the letter and the petition, signed by over 100,000 EU citizens, to the Austrian Council Presidency. The Presidency was also given various good, clean and fair products from different European countries, and a booklet with ‘ingredients’ for a better CAP, illustrated with pictures of Europeans with their concrete demands to achieve good food and good farming.

“This year, thousands of people joined the sheep crossing in Madrid and visited rural markets, tens of thousands participated in demonstrations against factory farming in Berlin and other cities in Germany. All over Europe, we see the real need of people to reconnect with nature and its products, it gives us reassurance to keep pushing for a change in our agricultural system.”